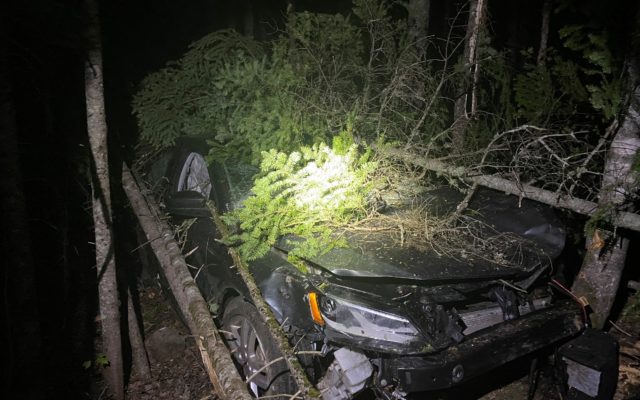 Houlton man hospitalized after his vehicle strikes a moose

Alexander MacDougall • May 25, 2020
A Houlton man has been hospitalized after striking and killing a moose while driving southbound on the interstate.

HOULTON, Maine — A Houlton man has been hospitalized after striking and killing a moose while driving southbound on the interstate.

Andrew Hanning, 24, of Houlton was driving in the early hours of May 25 when he struck a moose while southbound on Interstate 95 near Herseytown Township. The collision made Hanning lose control of his Volkswagen Jetta, causing him to swerve between both lanes of the interstate and strike several trees in the median.

The vehicle received extensive amounts of damage and had to be towed from the scene. Hanning was transported to Millinocket Regional Hospital with minor injuries from the accident, while the moose was killed as a result of the crash.

Hanning had not been wearing his seatbelt, according to the police report.

Just when we thought we were out of the woods with kitten season, it has hit full force.  The past few days have been difficult answering the phone and hearing the stories of why people have litters of kittens they need to surrender.
Campaign Corner END_OF_DOCUMENT_TOKEN_TO_BE_REPLACED