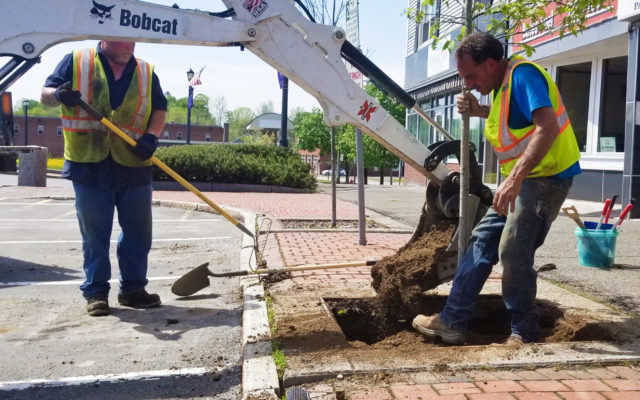 Joseph Cyr • June 1, 2020
Town officials are optimistic that the third time will be the charm for planting trees in historic Market Square. Public works planted seven new trees on Thursday, May 28.

HOULTON, Maine — Town officials are optimistic that the third time will be the charm for planting trees in historic Market Square.

On Thursday, members of the town’s public works department were busy planting seven new trees to replace ones removed in July 2019.

“A lot of the problem was due to damage caused by people,” explained Jane Torres, executive director for the Greater Houlton Chamber of Commerce. “People go by and grab a branch and it rips off. That stresses a tree tremendously.”

Another issue the town has learned from is snow removal. To help the trees from being damaged by snow shovels in the winter, a protective barrier will be placed along the base of the trees.

The trees were first planted in May 2015 as part of a Project Canopy grant. A total of 25 Japanese lilacs were planted throughout the downtown to replace oak trees that had grown too large for the area. Many of those lilac trees did not survive.

In May 2018, a total of 10 trees were removed from the south side of the downtown and replaced with a variety of different species, including Hornbeam trees in the hopes they would thrive. Funds for this project were donated to the town from the Putnam Trust Foundation.

Seven of those 10 trees did not survive.

After consulting with a tree specialist from the Portland area, the town opted to go with several different types of trees this time around. The new trees, which will be salt tolerant for winter, include two red oak, two hackberry, two Korean mountain ash and one Street Keeper honeylocust.

Funding for the new trees was solely paid for by the town this time. In the past, the town had received grants or donations to cover expenses. The good news, Torres said, is that the nursery that supplied the trees offered them as part of a “buy one, get one” deal which meant the town only paid $800 for the seven trees.

“There is nothing like a greenscape,” Torres said. “You want to attract people to the downtown area, and trees are an important part of that.”

She added once the sidewalk replacement project is completed in 2021, new benches will also be placed around the downtown.

I was mentioning to our board of directors this past week that I got a quarterly report from a large online retailer who will donate a portion of my purchases to a charity I select.
Campaign Corner END_OF_DOCUMENT_TOKEN_TO_BE_REPLACED