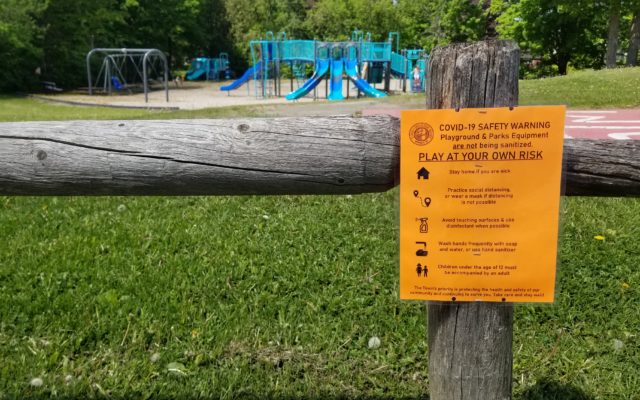 Joseph Cyr • June 4, 2020
One week after the Houlton Town Council was split on whether to reopen municipal playgrounds, the Just for Kids playground, skateboard park, tennis and basketball courts and Riverfront Park were all re-opened for public use.

One week after the Houlton Town Council was split on whether to reopen municipal playgrounds, the Just for Kids playground, skateboard park, tennis and basketball courts and Riverfront Park were all re-opened for public use.

RSU 29 also opted to reopen their playgrounds after they were closed to the public on May 26.

RSU 29 Superintendent Ellen Halliday said the decision was made to reopen the school playgrounds after consultation with the district’s insurance company and in tandem with the town. Signs are also placed on the school’s property advising people that use of the equipment is at their own risk.

Multiple signs have been placed around each playground and court advising people that they are using the equipment at their own risk.

“Marie has been working on the town’s plan for some time,” Anderson said. “Marie is very committed and passionate for the youth in the Houlton community. She attended many, many Zoom meetings with her peers in other communities, brainstorming with them and developed the plan. She checked with school and the Adopt A Block folks about their plans and precautions so we were all moving forward together. There was no discussion outside of the Advisory Board’s focus on the reopening plan and program offerings.”

The town manager added she was pleased to have offerings for the young members of the community.

While the ballfields are now open, no organized baseball or softball games are allowed until Aug. 1.

Councilor Sue Tortello, who was one of the town council members who expressed reservations about opening the municipal playgrounds, said Thursday that she was pleased with the decision.

“I concur with the decision that was made and think all town staff who were involved in this issue handled it in a very professional and thoughtful manner,” Tortello said. “Kudos especially to Marie [Carmichael] for her role in this. I know this was not an easy nor comfortable position to be in.”

For the first time since 2019, there is competition for open seats on the Houlton Town Council
Pets END_OF_DOCUMENT_TOKEN_TO_BE_REPLACED

All of us at the Central Aroostook Humane Society hope that you had a wonderful and safe Thanksgiving holiday.  One change in shelter hours: just for the month of December, we will be closed Thursdays for training purposes.
What's Happening This Week END_OF_DOCUMENT_TOKEN_TO_BE_REPLACED