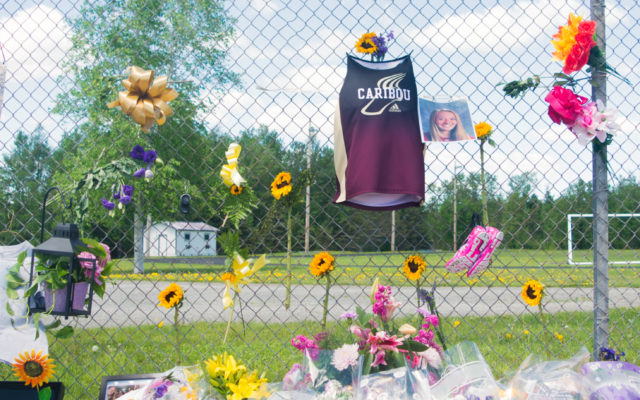 Chris Bouchard • June 9, 2020
The memorial near the Caribou High School ski building with its flowers and special mementos is a public symbol of how Kacie Haney’s unexpected death has shaken students and residents in Caribou and the surrounding communities.

CARIBOU, Maine — The memorial near the Caribou High School ski building with its flowers and special mementos is a public symbol of how Kacie Haney’s unexpected death has shaken students and residents in Caribou and the surrounding communities.

The 17-year-old Caribou High School junior was pronounced dead at the scene of an accident at the intersection of the Van Buren Road and connector at nearly 10 p.m. on June 5.

Now, because of the governor’s state of emergency limits on public gatherings to 50 people and social distancing measures, the funeral company will hold a drive-through ceremony on Wednesday at Caribou High School, RSU 39 Superintendent Tim Doak said Monday.

Eastern Aroostook RSU 39, the Caribou and Stockholm school district, posted on social media on Monday morning that the school athletic facilities will be closed until 4 p.m. Wednesday, June 10, for the funeral. The district asked the public to be respectful of the family and to plan accordingly.

The school district made counselors available Saturday afternoon after Friday’s accident, and into this week to help students cope with the sudden loss.

The school also announced Saturday morning that it would provide the area at the entrance of the Caribou High School ski building for a memorial where students and classmates could bring flowers or personal items as a way to remember and honor the life of their classmate.

Doak said on Monday that he and Caribou High School Principal Travis Barnes discussed the memorial on the morning after the accident, and determined that it would be best to host it at the high school.

“We visited the site where [the accident] happened, and we said we couldn’t have it at that location; it’s a very dangerous stretch of highway,” Doak said.

He said he called Haney’s parents and explained that because of the dangerous location of the accident, the school wanted to host the memorial.

“It was out of caution and for the safety of our own kids to not be on that stretch of highway, and to remember Kacie in a safe environment,” he said, adding that a candlelight vigil took place on the track later that night.

In addition to looking out for student safety, Doak said the fence outside the track next to the ski building was chosen to honor Haney’s love of running, as she was a member of the cross country team.

“The memorial helps celebrate her love of running. She was a great runner,” Doak said. “Not only did she touch Caribou students, but students and kids throughout The County through her time at the Presque Isle Technology Center.”

The superintendent said Haney was working to become a teacher, and was enrolled in the early childhood education program at the Presque Isle Technology Center.

The memorial will remain at the high school for approximately two more weeks, at which point notes and other items placed at the site will be given to the family.

“There’s no explanation for why these things happen, and the best thing we can do as a school department is to do everything we can to help the family, staff and students,” Doak said. “We have counselors at the school and we’ve told the family that they can call any time they need us.”

The memorial was established just one day before the Class of 2020 graduation, and Doak said this is an example of how schools need to be equipped to respond to a wide variety of situations, from mourning the loss of a student to celebrating an outgoing class.

This is not the first experience Doak has had as an administrator handling the sudden death of a student. In 2017, as MSAD 20 superintendent, he had to quickly put a team together and create a counseling plan for students on the weekend after an eighth-grade student in Fort Fairfield unexpectedly drowned.

“Kacie was just an outstanding student,” Doak said. “She touched all her students at the Presque Isle Technology Center. They were lucky to have her when they did. She made their lives better and touched a lot of people. She will truly be missed.”