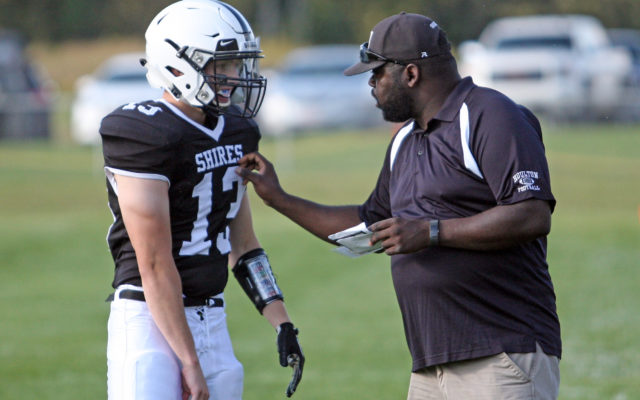 Joseph Cyr • June 18, 2020
The Shires have looked within to find its next head football coach with the hiring of Jon Solomon on Wednesday.

HOULTON, Maine — The Shires have looked within to find its next head football coach with the hiring of Jon Solomon on Wednesday.

Houlton has been without a varsity football coach since Brian Reynolds stepped down from coaching the Shires in February after 15 years with the program.

Solomon, a former University of Maine defensive tackle (1998-2000) and semi-professional player with the Penobscot Sea Dragons (2004-05) and Eastern Maine Warriors (2006), has been with the Shires for a number of years, serving as the assistant coach and both the offensive and defensive coordinator at different times for the team.

“Jon’s overall knowledge of the game and ability to connect with players should serve our team well,” RSU 29 Superintendent Ellen Halliday said.

Solomon has many years of coaching experience at the high school level, including serving as an assistant coach at both Bucksport (2008-14) and Hampden Academy, (2015) prior to relocating to Houlton. He also served as acoach with the Penobscot Sea Dragons and Eastern Maine Warriors.

“I am thankful that RSU 29 has given me this opportunity,” Solomon said. “I am excited for the team as we continue to build on the momentum that was created over the last couple of seasons.”

Solomon hosted his first team meeting as head coach in a virtual meeting Wednesday evening, he said on Twitter. The Shires’ seventh season of varsity football is tentatively scheduled to begin Sept. 4  against Camden Hills.