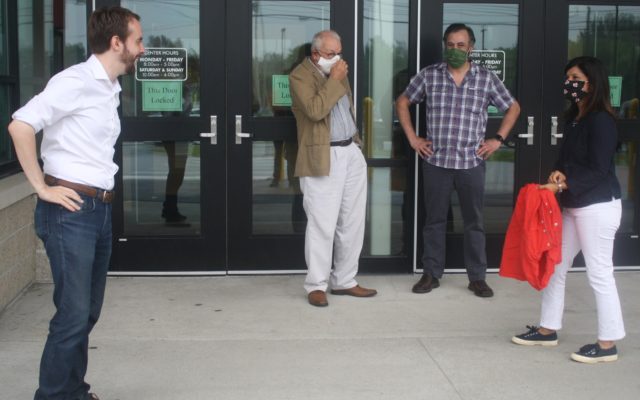 David Marino Jr. • July 14, 2020
It was a quiet, rainy Election Day for Presque Isle residents who came out to vote at the Sargent Family Community Center on Tuesday morning.

PRESQUE ISLE, Maine — It was a quiet, rainy Election Day for Presque Isle residents who came out to vote at the Sargent Family Community Center on Tuesday morning.

Social distancing was employed, with voters placed beside traffic cones that were six feet apart. As turnout was lower than the primary election in March, social distancing did not seem to be an issue, and many did not need to wait in line. morning

The Democratic Party held its U.S. Senate primary — the winner of which will likely face incumbent Republican Sen. Susan Collins in November. The Republican Party held its primary for Maine’s 2nd Congressional District — which encompasses most of the state beyond Portland and Augusta. Democratic Rep. Jared Golden currently holds that seat. 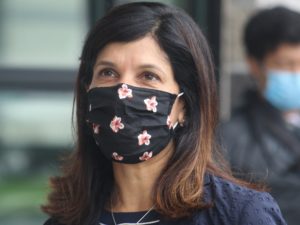 Democratic senate candidate Sara Gideon wears a mask as she meets with voters outside a polling place in Presque Isle on July 14. (David Marino Jr. | The Star-Herald)

While most voters said they were registered with a party, all voters were eligible to vote on two bond issues. Question 1 would authorize $15 million in bonds for high-speed internet while Question 2 would put $105 million toward transportation. The SAD 1 school board budget was also on the ballot in all of the district’s communities — Presque Isle, Mapleton, Chapman, Castle Hill and Westfield.

Brakey and Gideon greeted voters for about 45 minutes, with several supporters gathering around Gideon. Standing on either side of the entrance, they interacted at one point, with Brakey joking about Gideon facing Collins in November. Both campaigns began a long day of campaigning in the Star City as they traveled down the rest of the state.

Gideon heavily cited her State House record as an example of how she could fight for Maine, bringing up legislative accomplishments on health care and property tax relief.

She blamed Washington, D.C. — and Collins — for creating many problems the Legislature was forced to fix, including the Tax Cuts and Jobs Act of 2017, which she said risked raising taxes on middle-class families in Maine before the Maine Legislature passed property tax relief. Collins voted for that congressional bill.

“The most important aspect of why I am running and what I want to communicate to people is that we need somebody who will stand up for us as Mainers in Washington,” Gideon said.

Touching on rural issues centric to Presque Isle, Gideon, from Freeport, said she would fight for small farmers throughout Maine if elected to the Senate. She said the COVID-19 pandemic made the issue especially important.

“There are ways that we can be helping [farmers] that we see happen for bigger farms in the Midwest, but we don’t see happening for the smaller farms here in Maine,” Gideon said. 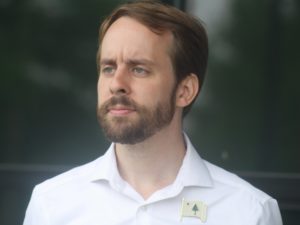 Brakey said his campaign’s small government especially resonated with rural voters like those in Presque Isle, who feel strongly about supporting their 2nd Amendment right to firearm ownership, do not want government involvement in health care and yearn for lower taxes.

“We have many challenges ahead of us as a state and as a country,” Brakey said. “The answer to those problems can be found in more freedom for the people, not more big government telling us how to live.”

While most voters wore masks, several said they were not worried about health risks associated with voting in Tuesday’s election, citing short lines and the pandemic’s small effect on Aroostook County.

“If we were in Portland, [I’d feel nervous]. If we were in California, I probably wouldn’t even show up,” said George Watson, 72. “But being in Northern Maine and having as low a problem as we have, I feel quite confident coming out.”