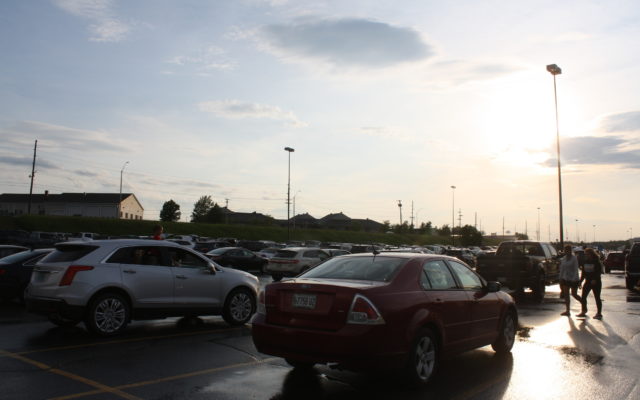 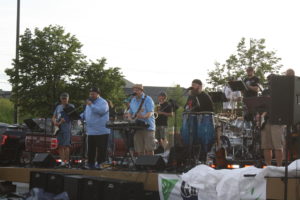 As a replacement for their traditional outdoor concerts at Riverside Park, the Presque Isle Downtown Revitalization Committee opted for a drive-in style concert on July 9 to encourage social distancing and give people a chance to enjoy live music again.

“I think that people are excited to go out and participate in a community event, even if it does look a little different,” said Jordyn Madore, secretary for the Downtown Revitalization Committee and Summer Concert Series subcommittee chair. “People who have been avoiding public areas can still enjoy a great performance without being in a large group of people.”

But rainy weather became an obstacle to summer music fun throughout the evening. After rain showers passed by overhead, local Motown and contemporary pop band Star City Syndicate began performing shortly after 6 p.m. They soon had to stop and take cover after heavy rain showers began pouring onto the parking lot. 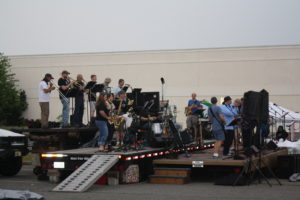 Members of Star City Syndicate perform at the Aroostook Centre Mall on Thursday, minutes before a downpour of rain temporarily disrupted Presque Isle’s first drive-in concert of the summer. (Melissa Lizotte | The Star-Herald)

Nearly an hour passed before Star City Syndicate, a band consisting of nearly 20 string and horn musicians, was able to resume their performance. Guitarist and vocalist Brian Mosher thanked the audience for riding out the storm in their cars to hear an abbreviated version of the band’s set list.

“God bless 2020!” Mosher said, in reference to the COVID-19 pandemic that influenced the drive-in format of the concert. “This is the best show we’ve ever done.”

Many people stood outside their vehicles or sat in lawn chairs, hoping to capture some essence of a typical live concert experience. Syndicate drummer Chris Morton said that he and his fellow musicians have missed the energy that comes from performing live.

“Right now a lot of us are dealing with loneliness and divisiveness. Music unites us,” Morton said.

The second and final drive-in concert will feature a show from Wally and the Virginians on Thursday, Aug. 6.

Madore said the concerts are an example of local community members thinking outside the box to give folks summer fun even during uncertain times.

“We hope that our community shows up full force to support these incredibly talented musicians,” she said.