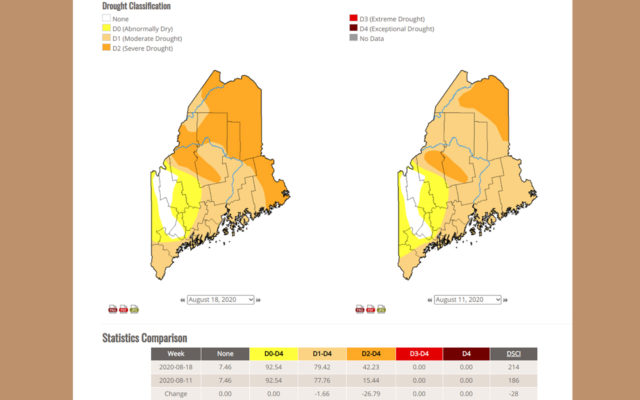 MADAWASKA, Maine — The Crown of Maine is in a D2 — or severe — drought status for the seventh week in a row.

The severe drought status is characterized by low moisture in the soil and lack of widespread rainfall, drying vegetation and low stream flows, according to the National Weather Service report.

The rest of Aroostook County now joins the Crown of Maine in D2 drought status as the total precipitation deficits range from 4 to 8 inches causing dry soils, and low streamflows, according to the US Drought Monitor. Average temperatures ranged from 2 to 10 degrees higher than normal as well.

Tom Gordon, policy and planning coordinator for the Office of the Commissioner for the Maine Department of Agriculture, Conservation and Forestry, said that 42 percent of Maine is now in what is considered a severe drought or a D2 status.

“The area has expanded to include almost all of Aroostook, most of Washington, and northern Somerset, Piscataquis and Penobscot counties,” Gordon said.

The lack of precipitation in rural Aroostook County has already caused adverse effects to crops and agricultural production, according to Gordon.

“Water is critical at this time of year for the growth and quality of potatoes and other crops,” Gordon said. “Many farms are seeing limited to no capability to irrigate due to dry ponds and low flows in rivers and streams.”

He added that hay yields are down which limits cattle feed, which could result in farmers selling cattle early without “adequate feed through the winter.”

Tuesday will mark the start of week eight in the severe drought status. After eight consecutive weeks of that status several USDA programs become available to help farmers, ranchers and some small businesses.

Despite bouts of rainfall at the end of the week, Gordon said it is not enough.

“One day’s rain will not end the drought,” Gordon said Friday. “We will need a change in weather pattern with more regular periods of steady soaking rains.”