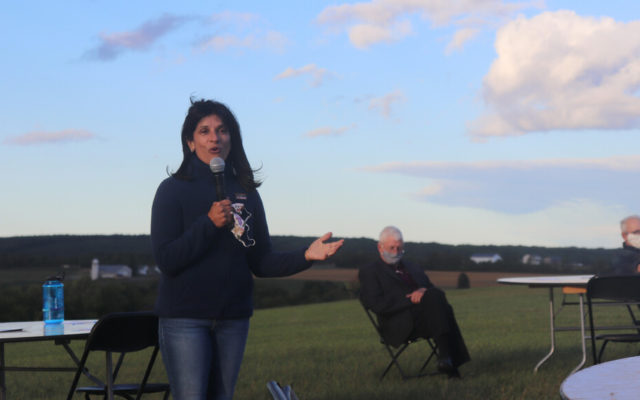 Alexander MacDougall • August 27, 2020
Maine Speaker of the House Sara Gideon made a stop at Hidden Spring Winery in Hodgdon Wednesday, Aug. 26, meeting with voters and supporters to discuss her policy positions in her race for U.S. Senate against incumbent Republican Senator Susan Collins.

HODGDON, Maine — Maine Speaker of the House Sara Gideon made a stop at Hidden Spring Winery in Hodgdon Wednesday, Aug. 26, meeting with voters and supporters to discuss her policy positions in her race for U.S. Senate against incumbent Republican Senator Susan Collins.

The visit was just one of several in the County this week for Gideon. She was also scheduled to appear Thursday, Aug. 27, at the Caribou Recreation Center, meeting with representatives from the Aroostook Mental Health Center, Cary Medical Center, Aroostook County Action Program, and the Aroostook County Sheriff’s Office.

Though Aroostook County tends to lean heavily Republican and serves as hometown of Collins, Gideon finds herself leading statewide polls in the nationally-monitored race, with the Democratic Party hoping a Gideon victory will add them another seat in the Republican-controlled senate.

At the start of the event, which was attended by about 30 people, Gideon was introduced by Maine State Senator Mike Carpenter (D-Houlton), who voiced his support for her candidacy, citing her tenacity and leadership ability. 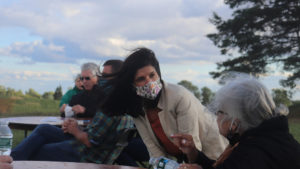 Maine Speaker of the House Sara Gideon speaks outside at the Hidden Spring Winery in Hodgdon, Wednesday, Aug. 26, as part of her campaign for U.S. Senate against incumbent Susan Collins.

“I can think of a couple of male legislators who tangled with her last year who came out on the losing end of that engagement,” he said. “She may be small in stature, but she’s large in heart and large in purpose.”

Gideon, who originally hails from Rhode Island and now represents the Cumberland County town of Freeport in the Maine House, spoke of how she entered politics after a voicemail on her home phone urging her husband to run for town council inspired her to run instead.

“We were not encumbered with having a ‘D’ or an ‘R’ next to our names,” Gideon recalled of her early years in town politics, “But what we were faced with every day were the challenges that people in our little town were facing.”

Shortly after she began to speak, the outdoor gathering was interrupted by a sudden burst of heavy rain which forced the event to be relocated inside. But Gideon used the opportunity to shift gears and allow those gathered to ask questions regarding her policy positions.

A large factor in Gideon’s campaign has been the issue of health care, with Gideon emphasizing her goal of more affordable health care access for all. The day before her Hodgdon visit, Gideon released a six-part plan to help improve health care, part of which includes expanding health care access in rural areas, by pledging to provide more funding for community health centers, and to recruit more doctors and nurses to rural areas.

Asked how she would help bring more medical professionals to rural communities, Gideon stated that it would take a combined effort of both state and federal funding.

“I think some of the things can be as simple as extending what we have done during this pandemic,” she said. “I think we really need to continue to make sure that programs that exist on the federal level around getting either people through medical school or medical training, and then giving them the ability to lower their student loans or have student loan forgiveness, or tax credits, is an incredibly important tool in actually recruiting people to a place like Maine.” 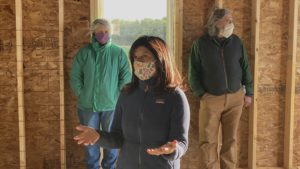 Maine Speaker of the House Sara Gideon speaks outside at the Hidden Spring Winery in Hodgdon, Wednesday, Aug. 26, after a brief rainstorm moved the outside event indoors.

The campaign of Gideon against Collins also mirrors the national campaign of Democratic nominee Joe Biden’s race against Republican incumbent Donald Trump. Last weekend, Biden held his first joint interview with his vice-presidential nominee Kamala Harris, where he stated he would support shutting down the economy again if scientists recommended it to stop the spread of COVID-19.

“I think the most important thing a new administration needs is yes, listening to science,” she said. “If we don’t have public health, we will not have anything else.”