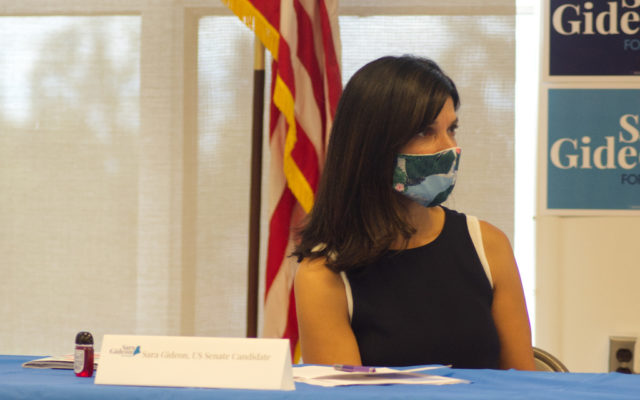 Guests at the discussion, which was hosted at the Caribou Wellness and Recreation Center, were Meghan O’Berry of the Aroostook County Action Program; Erik Lamoreau, who in addition to working with the Aroostook Mental Health Center (AMHC) is a substance use disorder peer recovery center manager at Roads to Recovery; Lorraine Chamberlain, a Licensed Clinical Social Worker at AMHC; Erika Arguello of Cary Medical Center; and Dale Gordon, a family nurse practitioner and emergency nurse practitioner.

Gideon told the guests that while she has been working on numerous health care issues on the state level, working in Washington could allow for further progress in terms of achieving the goals outlined in her agenda.

She said she wanted to focus on listening to the guests’ concerns, as it could provide a clearer picture of the issues facing those in rural areas such as Aroostook County.

Lamoreau, through his work at the recovery center, said that one of his primary goals is to promote all paths of recovery, be it through medication-assisted therapy (MAT), going cold turkey, or via a 12-step program. 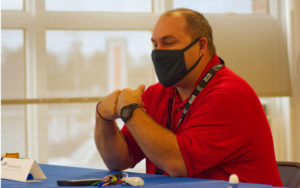 Erik Lamoreau, who in addition to working with the Aroostook Mental Health Center is a Substance Use Disorder Peer Recovery Center Manager at Roads to Recovery spoke with U.S. Senate Candidate Sara Gideon about substance use recovery and stigma during an Aug. 27 roundtable discussion at the Caribou Wellness and Recreation Center. (Chris Bouchard)

He said the organization also distributes Naloxone, a life-saving medication that counteracts the effects of an opioid overdose. Lamoreau explained that he is also in long-term recovery, and that as of Aug. 27 had not used a mind or mood altering substance in six years, six months, and seven days.

He said the Caribou recovery center is up to about 22 visits a day, making it the third largest center in the state in terms of attendance. Out of all the services offered, Lamoreau said the recovery coaching done in local jails is among the most valuable.

“Inmates really love the peer to peer aspect,” he said. “Lived experience is so valuable.”

Through an emergency bill to expand treatment, she said they were able to perform MAT induction therapy for 37 inmates that would not have otherwise received it.

She said that this is a population in which 70 percent of inmates with substance use disorder are likely to overdose upon release and die, and that ensuring the bill stays in place could significantly reduce the likelihood of future overdoses.

“The Maine State Prison has shown in the last year that they have zero releases who have been part of an MAT and had an overdose,” she said. “That screams how effective this is.”

Chamberlain, and others in attendance, also spoke about reducing the stigma associated with substance use and recovery, and how this can not only save lives but how it can help those on track to sobriety find sustainable employment.

Gordon, who has been in the County for about 40 years and has decades of experience in the medical field, commended Gideon’s health care plan and brought forth a number of issues she encounters on a daily basis with patients struggling to afford insurance and prescription drugs. 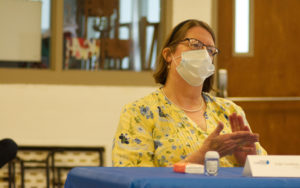 Through working for Full Circle Health Care in Presque Isle, a small, independent practice, Gordon said she came to realize just how many layers there are between when a patient sees a bill and it goes to their insurance company.

She shared an anecdote of a patient who had to jump through hoops in order to obtain affordable diabetic medication, which was being offered at $400 to $500 a month. She eventually learned that the medication would cost $290 a month with insurance, and the pharmacist suggested coupons to lower the price by another $100.

“These prices are astronomical,” she said. “Almost any diabetic spends $400 to $500 a month, and they have coupons. Why not just lower the price than offer a coupon? I mean, we’re clipping coupons for our prescriptions. Does that make sense to anybody?”

Gordon said that having a set of controls on prescription costs is extremely important, as well as working to ensure insurance companies do not take advantage of people between 60 and 65.

Recently, Gordon said a 62-year-old woman had to give up her job in southern Maine to move up to northern Maine and care for her mother with Alzheimer’s. As a result, she had to go off her company’s health insurance and obtain community health insurance.

Following the discussion, Gideon said it was illuminating to hear about the issues brought forth, particularly how many recovery organizations are working together to fill in gaps where the government has failed, as well as the concerns mentioned by Gordon concerning struggles to afford medicine and insurance.

“People are really struggling to be able to afford to buy their medicine,” she said. “They’re falling through the cracks and often chasing down insurance companies to make sure they are able to get the coverage they need. That was really impactful to hear, because I think it demonstrates what’s happening in Aroostook County.”

For the first time since 2019, there is competition for open seats on the Houlton Town Council
Pets END_OF_DOCUMENT_TOKEN_TO_BE_REPLACED

We hope everyone enjoyed a wonderful holiday season and is looking forward to the new year.  December was a busy month at the Central Aroostook Humane Society with so many people and businesses bringing in much-needed supplies and monetary donations, which help us to take care of the special temporary pets in our care.
What's Happening This Week END_OF_DOCUMENT_TOKEN_TO_BE_REPLACED