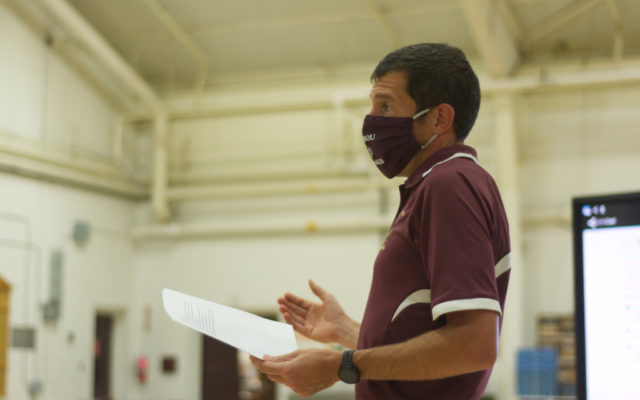 Chris Bouchard • September 5, 2020
RSU 39 (Caribou and Stockholm) Superintendent Tim Doak and Caribou High School Athletic Director Evan Graves discussed the impact of a recent decision from state officials to delay the start of fall sports by one week to Sept. 14.

CARIBOU, Maine — The fate of fall sports remains up in the air following conflicting reports from the Maine Principals Association and Governor Janet Mills.

RSU 39 (Caribou and Stockholm) Superintendent Tim Doak and Caribou High School Athletic Director Evan Graves discussed the impact of a recent decision from state officials to delay the start of fall sports by one week to Sept. 14.

The announcement was made just before the RSU 39 board meeting Sept. 2 in a release from the Maine Principals Association that included quotes from Mike Burnham, executive director of the MPA; Gov. Mills; Maine School Boards Association Director Executive Steve Bailey; and Maine School Superintendents Association Executive Director Eileen King.

State officials emphasized the social, physical, and mental benefits of athletic programs, while also prioritizing the importance of protecting the health of staff, students, and their families amid the COVID-19 pandemic.

At the time of the meeting, Doak said he had just received notification of the decision an hour prior, and discussed the school’s possibilities moving forward. With County schools starting early and taking a two to three week break for potato harvest, Doak said this presents a unique dilemma for sports in the Caribou region.

He said one potential issue is that if an Aroostook County school plays against a southern Maine school, and then later finds out that a soccer player on that team had COVID-19, there is a possibility that the virus could easily spread throughout the school.

To minimize this issue, Doak said he and other Aroostook County superintendents are working together and discussing the possibility of keeping sports in the region and not traveling downstate in the fall.

Graves said that through discussions with Doak and Aroostook League President Tim Watt, a possibility of arranging games solely in Aroostook County could be an option. For example, Caribou’s varsity soccer team could play Presque Isle, while the junior varsity team could play Easton, allowing all high school students to participate in athletic activities.

“If it came down to it, we could do something different,” said Graves. “We could develop in-house intramurals and stretching that out to produce some activities that are outside the box like mountain biking, and things of that nature to keep kids active and engaged while having adults in their life that they can connect with.”

Board member Jan Tompkins asked if the delay will result in the season ending later, or just a much shorter season than normal. Doak said this would result in a shortened schedule, with the average 14 to 16 games moving down to 10. Graves said it may even go down to eight games.

He added that traveling to games via bus may also present problems.

The superintendent said he and other administrators are constantly thinking about the potential impact that missing a year of sports could have on students.

“It’s our job as school leaders to keep kids safe and that’s why every superintendent and every board across Maine is having a hard time with this,” he said. “No one wants to put kids or coaches in an unsafe situation.”

On Thursday, Rep. Harold “Trey” Stewart III, R-Presque Isle, announced he will run for a state Senate seat in the 2020 legislative election -- an important change for one of the most powerful representatives in the Maine House.
Pets END_OF_DOCUMENT_TOKEN_TO_BE_REPLACED