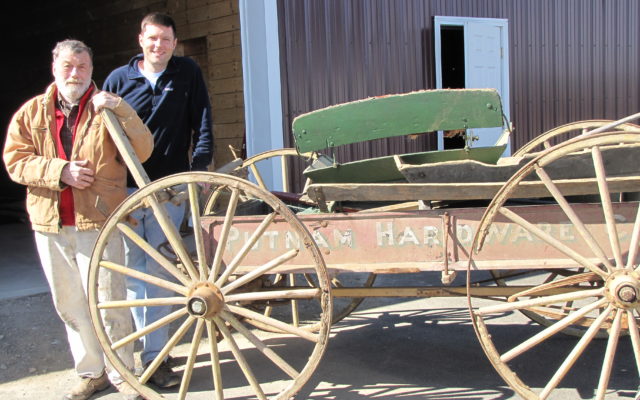 Just a few years ago the late Al Putnam of New Limerick and his son Albert arrived at the museum in Littleton with a weathered wagon on the back of a truck. It had been stored away for decades by Putnam, but it was time to place it at the local museum to share its history.

Although it was well over 100 years old, volunteers Dee Cote and Joe Inman worked to restore the gem. They engaged others including, Jay Andrew who helped with the axles; Matthew Johnson for wheel repair; and Hines Construction for wood repair. Once the wooden pieces were refurbished other volunteers added to the project. Larry McCarthy, a local sign maker brightened up the lettering and museum President Jamey Watson meticulously painted many parts of the historical wagon.

The wagon was built between 1885-1890 by the Silas W. Taber carriage manufacturing and blacksmithing company of Houlton. Taber was one of the best-known manufacturers of fine carriages and sleighs in the community. His shop was located on Mechanic Street.

In 1904, Fred L. Putnam, Al’s grandfather, became a partner with Richard L. Turney, in a hardware store located in Market Square. Then in 1908, Putnam’s brother Arthur, joined the firm. Upon the death of Mr. Turney, the Putnam Brothers retained ownership. During this time the horse-drawn wagon was used to make deliveries with the signage, “Putnam Hardware Company.” Deliveries were made in Houlton and the surrounding area. 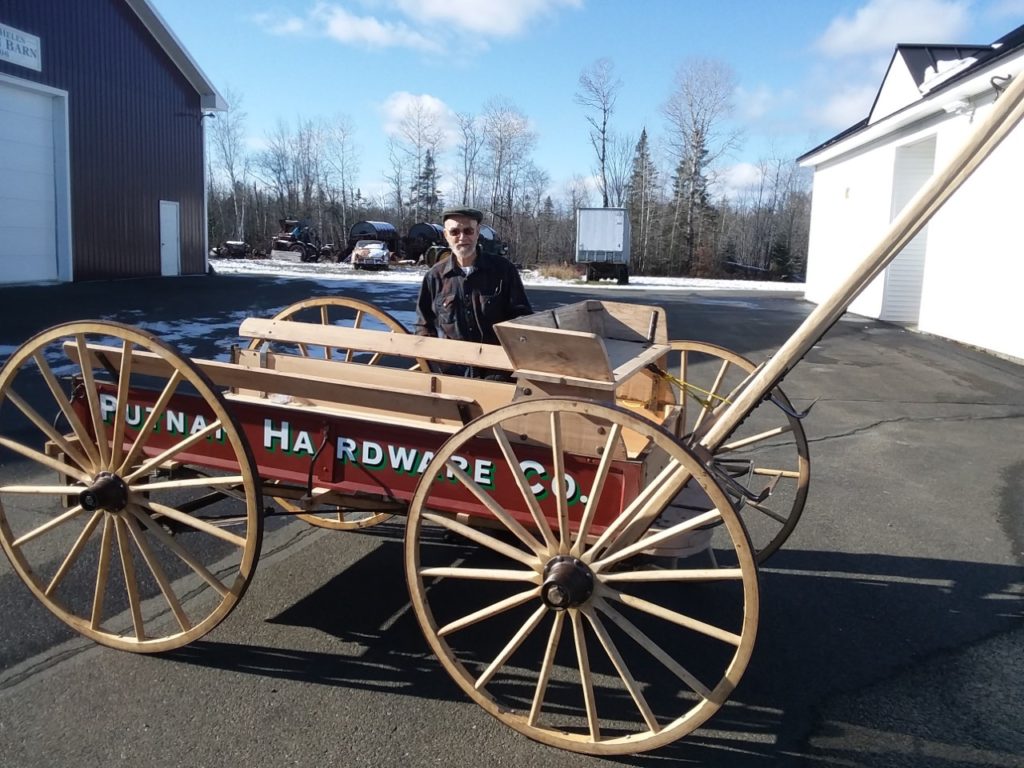 LITTLETON, Maine — September 10, 2020 — Dee Cote, a museum member and experienced wood turner, worked with others to refurbish the Putnam wagon. It will be on display Sept. 19 during the museum’s take out supper. (Photo courtesy of Karen Donato)

In 1910, the Putnams began purchasing Gulf Oil Products for Putnam Hardware, which was in the area of H&R business now. It was there that the first gasoline tank in Aroostook County was installed. Gulf gasoline was dispensed from that early pump and from this small beginning grew a distribution system that supplied all of northern Maine with Gulf products. After automobiles became popular, wagons were abandoned or put away in a barn and used only occasionally for family gatherings or a particular event.

The board of directors at the Agricultural Museum stated they were thankful the wagon was preserved to some extent and it will be enjoyed by the many visitors at the museum. This project was funded in part by the Putnam Charitable Trust, members of the Albert Putnam family, private donors and the Southern Aroostook Agricultural Museum.

It will be on display at the upcoming Take-out chicken barbecue supper to be held from 4:30 to 6 p.m. on Saturday, Sept. 19 at the museum on U.S. Route 1 in Littleton. The museum is open only on Saturdays through September from 1-4 p.m.