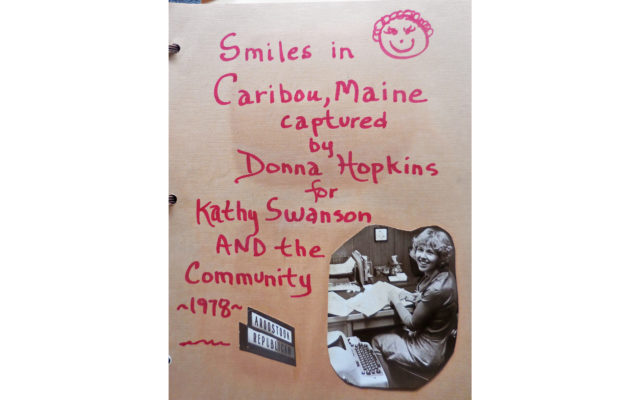 Kathryn Olmstead, Special to The County • September 29, 2020
Readers of the Aroostook Republican in the late 1970s might remember a bright, blonde Californian with a broad smile who reported for the newspaper during the year she spent in Maine to test her ability to survive a winter.

Readers of the Aroostook Republican in the late 1970s might remember a bright, blonde Californian with a broad smile who reported for the newspaper during the year she spent in Maine to test her ability to survive a winter. Donna Hopkins called herself a Desert Rat, because she grew up in Bakersfield, California, but she wanted to move to her ancestral home in Montana in time to celebrate her grandmother’s 90th birthday and the years to follow it.

She wondered if she was tough enough to endure a Montana winter. What better place to find out than northern Maine? Her recently divorced college friend, Kathy Olmstead (then Swanson), had lived out in the willy-wags north of Caribou for several years.

An idea hatched in letters and phone conversations and I welcomed my old friend into my home and life in 1978. Donna not only helped me keep the wood fires burning in Westmanland, she also helped cover the news in Caribou, where I edited the weekly newspaper.

Terry St. Peter was city manager, Wilfred Bell was the mayor, Bill Johnson headed the chamber of commerce and Clayton Harrington was administrator as Cary Memorial Hospital became the Cary Medical Center. John Martin of Eagle Lake was three years into his reign as speaker of the Maine House of Representatives and Democratic Senator William Hathaway brought First Lady Rosalynn Carter to Aroostook County to help him campaign against successful challenger William S. Cohen for his seat. We know these things today because Donna took pictures of these and dozens of other people for her Aroostook Republican stories and collected some of them in a scrapbook titled “Smiles in Caribou, captured by Donna Hopkins for Kathy Swanson and the Community~1978.”

Dot McDuffie sold advertising for the newspaper with her friend Reginald Thompson and was captivated by Donna’s vibrance. Saddened by news of her passing on Sept. 15, 2020, Dot thought there might be others in the community who remembered Donna and would want to know about her life beyond Caribou. Dot encouraged me to share parts of the story composed by Donna’s brother, Roger Hopkins, for the newspaper in Whitefish, Montana, where Donna lived the last 15 years of her life.

Before her Maine adventure, she had taught high school English in California and at a boys’ school in Australia, then traveled across Asia, the Middle East and Europe. That year in Maine gave her the confidence she needed to move to Whitefish, where she became Dean of Community Education for Flathead Valley Community College. But after a time in Montana, the wanderlust returned and led her to Mexico, Central and South America, California, Texas and Hawaii, where she accepted a position with the U.S. Small Business Administration.

Through the Sunrise Rotary Club in Honolulu, Donna became a sponsor for a young Cambodian resident of the Future Light Orphanage of Worldmate outside Phnom Penh. After making regular contributions of financial support, she wanted to meet Chantra Suon, who would become her “daughter” in spirit. She traveled to Cambodia several times, mentoring and teaching at the orphanage, and eventually bringing Chantra to the United States, where she “gave” her away in marriage in 2014.

Donna concluded her career with the SBA as an Economic Development Specialist in Las Vegas, Nevada, where she specialized in helping women succeed in starting and growing small businesses. She retired to the Montana home she had shared with her grandmother and expressed her affection for the community in a variety of ways, most notably the publication of a coffee-table book of the art and life of a local artist titled James R. Bakke, Montana Artist: From the Prairie, to Whitefish, to Glacier National Park.

In her brother’s words, “Donna Shane Hopkins’ generous and expansive heart, beating since her Valentine-Day birth 77 years ago, in 1943, finally gave up trying to cope with all the medical challenges she experienced over the years, including a battle with Covid-19 that she survived. Now hundreds of people, friends and family can remember and share the happiness she brought them. Each story, every friend, and all the time spent with those who loved her was a memory embraced by her, relived in every conversation, text, email and Facebook post, providing her with joy in each encounter.”

Kathryn Olmstead of Caribou is a former Aroostook Republican editor, former columnist for the Bangor Daily News and former editor of Echoes magazine who was a member of the journalism faculty at the University of Maine for 25 years.