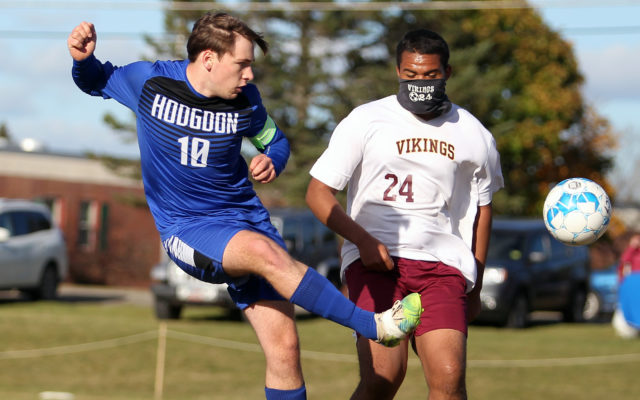 Joseph Cyr • October 15, 2020
One week after the Maine Principals’ Association nixed a plea to give County teams a waiver to the state’s 10-game maximum for soccer, athletic directors for the Aroostook League have come up with an alternative approach.

HOULTON, Maine — Aroostook County will be able to crown boys and girls soccer champions after all.

One week after the Maine Principals’ Association nixed a plea to give County teams a waiver to the state’s 10-game maximum for soccer, athletic directors for the Aroostook League have come up with an alternative approach.

Instead of playing a traditional playoff format with quarterfinals, semifinals and finals, the top four teams in each of two divisions will square off in a championship bracket. The remaining teams in seeds 5-8 will also play in a consolation bracket, according to Tim Watt, athletic director for SAD 20 in Fort Fairfield.

The Aroostook League originally came up with an eight-game regular season, with plans for three rounds of postseason play. That meant a championship game would have been the 11th game for teams, which is something the MPA was not willing to accommodate.

The 10 regular-season game limit for soccer was prompted by COVID-19 safety protocols and is four games fewer than a normal regular season. The MPA canceled regional playoff games and state championship contests for soccer and field hockey, so no state champions will be crowned this year.

County athletic directors were originally going to gather via Zoom Wednesday, Oct. 14, to hash out a plan, but instead decided via emails to the altered playoff approach.

Southern Aroostook Community School Athletic Director Cliff Urquhart said the County athletic directors felt it was important to offer some sort of playoff format for the players and coaches as an extra incentive during these difficult times.

“It gives some clarity to players and coaches, and gives them a goal,” Urquhart said. “Otherwise, we are just out there scrimmaging. They are actually playing for something and if teams ever needed any extra motivation it’s needed this year.”

Urquhart said there has not been an Aroostook County playoff and championship for many years, possibly dating back to the 1970s or ‘80s.

Because of the two divisions, it means two boys and two girls squads will be crowned as Aroostook County champions this year. Four championship trophies will also be presented to the winning teams, with the County athletic directors agreeing to cover the expense.

Ties in the standings will be decided first by head to head records, then common opponents defeated, and if necessary a coin toss.

The standings as of Thursday, Oct. 15, were as follows: