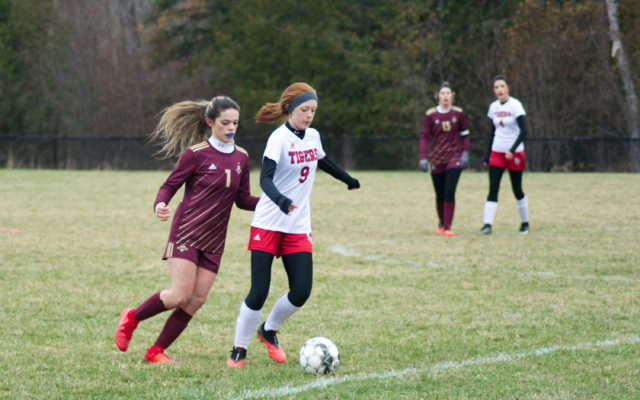 CARIBOU, Maine — The Caribou girls soccer team will contend for the Aroostook County Division 1 championship after picking up a close 3-1 home victory over Fort Fairfield Thursday.

The first half of Thursday’s semifinal ended with Caribou leading 2-1, with both teams blocking shots throughout most of the second half and Madison Miller of Caribou scoring a final goal with only roughly 12 minutes left on the clock, bringing the total to 3-1.

“I was just talking to the Fort Fairfield team and I told them that after watching the standings all year, the one team I didn’t want to have to play in the playoffs was Fort Fairfield,” Shea said. “They have a very good team and I knew it was going to be a close game for us. They certainly made it difficult for us, and they made it hard for us to score. They played good, hard soccer, and I knew we’d have to rise to the occasion today.”

Fort Fairfield Coach John Ala said he and the team were looking forward to the game and another opportunity to play.

“It’s a quality club here in Caribou,” he said. “They’re very athletic and they have a very skilled coach. I thought it was a nice game of soccer. Both sides played really hard; both wanted to compete and make it to that final championship game, and Caribou did a great job.”

Ala commended the athletic directors for creating an opportunity for the teams to participate in playoff soccer in The County.

“We usually don’t, as a Class D school, get the opportunity to play against Class B schools,” he said. “I’m very proud of this group of girls. This is my third year coaching and we were looking forward to it, but with everything going on in the world, everything changed. But what a great opportunity our ADs have created for us here.”

Shea felt similarly, and said he’s glad the team has some more opportunities to lay soccer.

“All things said and done, I’m just happy we’re playing soccer,” he said. “It’s nice to have a playoff, even if it’s Aroostook League, it means just as much to us as if we were playing the Northern Maine Championship. The playoffs, to me, are just a bonus. I’m happy that we played well enough to be able to play in the championship next week.”