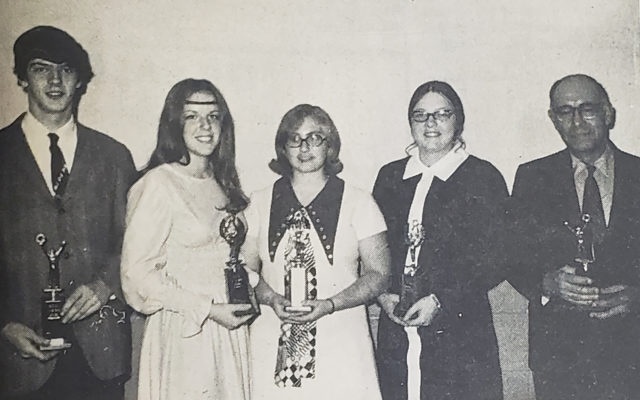 Yvonne Tardie • November 5, 2020
75 Years Ago -  Nov. 8, 1945 December potato prices steady -- The U.S. Department of Agriculture announced that support prices on 1945 late-crop Irish potatoes did not increase for the remainder of the marketing season ending June 1946, over the support prices set for the month of December.

December potato prices steady — The U.S. Department of Agriculture announced that support prices on 1945 late-crop Irish potatoes did not increase for the remainder of the marketing season ending June 1946, over the support prices set for the month of December.

Edgecomb released at Grenier Field — Second Lieutenant Wilbur R. Edgecomb, husband of Mrs. Margaret C. Edgecomb of Presque Isle, was honorably released from active duty with the Army Air Forces, it was announced at the separation center. Retaining his commision and rank, he was still subject to recall during emergencies. Before entering the service in January 1994, he attended the University of Maine at Orono. He received his commission as a 2nd Lt. at Hondo, Texas, in July 1945. His last duty station was San Marcos Army AirField, a unit of the AAF Training Command.

Sister Elizabeth Cyr appointed as director  — Sister Ania Therrien, provincial superior for the Maine Province of Sister Servants of the Immaculate Heart of Mary, and Neil D. Michaud, diocesan director of the Bureau of Human Relations Services, jointly announced the appointment of Sister Elizabeth Cyr to the post of director of District V. The District V Office, located in Caribou, was one of the five branch offices maintained in the state by the Bureau of Human Relations and served all of Aroostook County. The office and programs were funded by Bishop’s campaign. Sister Elizabeth assumed her new position Nov. 9. She succeeded Sister Kathleen Kilbride, who held the position since Sept. 1968 and had resigned to assume new social work responsibilities in New Brunswick. For the previous year, Sister Elizabeth had served as coordinator for a statewide task force responsible for unwed mothers and adoptions.

Industry named new director — T.B. Angelos, executive vice president of JS Industries, announced the appointment of Richard S. Brown as administrative director of JS Industries with responsibilities over Potato Service Inc.; Western Potato Service Inc.; Sal-Mor Farms and all other subsidiaries. He was headquartered in Presque Isle. Brown, 41, was educated in the public schools of Butte, Montana, and graduated from Idaho State University in the class of 1957. Brown accepted a position with the J.R. Simplot Company at Pocatello, Idaho, in 1957 and served as personnel director for a period of 12 years.

PIHS coach named to running hall of fame — Danny Paul, an English teacher and coach at Presque Isle High School, was inducted into the Maine Running Hall of Fame at a ceremony in Portland. Paul moved to Presque Isle during the summer of 1994 after a distinguished coaching career at Greely High School in Cumberland. Paul, 41, grew up in Portland and started running at Portland High School to get in shape for freshman basketball. From 1969-1972, he ran on five state championship teams (two in cross country, two in outdoor track and one in indoor track) and individually he made the All-State team four times.

Winning portfolio — Nicole Gamblin, a senior at Presque Isle High School, was selected during the summer for having the best portfolio and garnered top marks in the categories of reading, writing and speaking. Her portfolio was judged by educators from across the United States. She worked with PIHS english teacher Leslee Smith on the compilation. Portfolios are being required by many colleges and universities as a means of student assessment. Gamblin was a standout catcher for the PIHS softball team, a member of the National Honor Society and President of the Key Club.