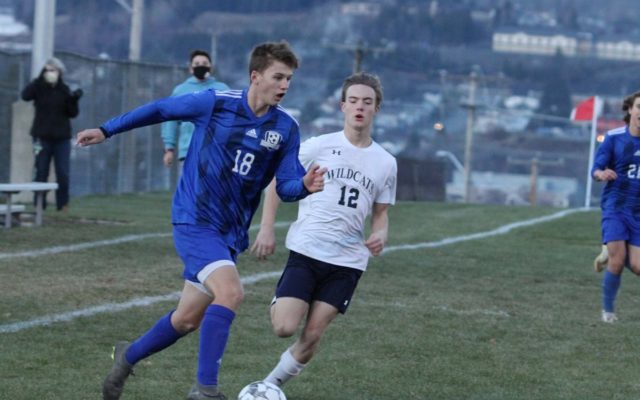 Jessica Potila • November 6, 2020
The No. 3-ranked Madawaska Owls came out fighting but the Presque Isle defense proved too much to overcome as the  No. 4 ranked Wildcats managed a 1-0 win to take the Aroostook League Division I Boys Soccer Championship on Thursday.

MADAWASKA, Maine — The No. 3-ranked Madawaska Owls came out fighting but the Presque Isle defense proved too much to overcome as the  No. 4 ranked Wildcats managed a 1-0 win to take the Aroostook League Division I Boys Soccer Championship on Thursday.

The Presque Isle defense was impenetrable with Wildcat goalkeeper Xavier McAtee fending off 15 shots on goal from the Owls aggressive offense.

Presque Isle coach Tim McCue said his team could not have won without the defensive efforts of McAtee and sweeper Conner Michaud.

“We’ve tried to build our team on defense,” McCue said.

McCue added that McAtee is one of the best players he has coached in his career and one of the best he has seen in the division. ”He’s a rock wall back there; he’s unbelievable,”  McCue said.

McCue had similar praise for Michaud. “He was the anchor of my defense and one of the biggest reasons we were able to accomplish everything we have this year,”  McCue said. “He took care of business.”

McCue said his team expected a tough fight from the Owls.

McCue also noted that the COVID-19 pandemic posed challenges for all athletes this season.

“Our guys, like every other team in our area went through a lot to get here,” he said.

Madawaska coach Ben Gagnon said his team learned a lot from the COVID induced changes to the soccer season.

“Being a Class D school playing against teams from bigger classes gave us an opportunity to really grow and develop as a team,” Gagnon said. “The growth we have witnessed this season has been tremendous. We are very grateful during these crazy times that we were able to have a season.”

The Owls ended their season with a 8-2 record and earned the Aroostook League Division I boys soccer runner-up plaque.

The Aroostook League Champion Wildcats also registered an 8-2 record on the season.