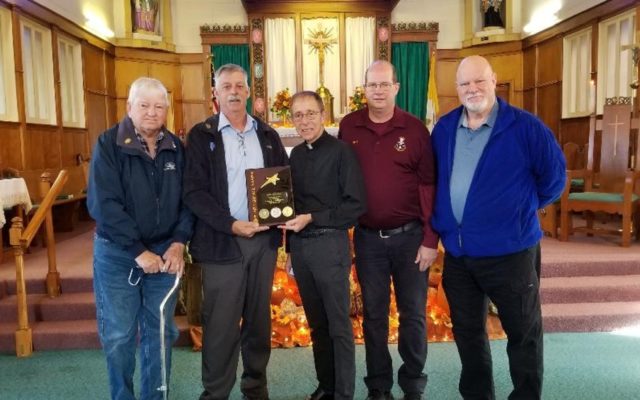 Chris Bouchard • November 18, 2020
The Limestone Knights of Columbus recently received the Star Council Award, an honor given when a council reaches the requirements for three individual awards within a single fraternal year.

LIMESTONE, Maine — The Limestone Knights of Columbus recently received the Star Council Award, an honor given when a council reaches the requirements for three individual awards for charitable outreach, membership growth and the promotion of insurance programs within a single fraternal year.

Mark Bourgoin, immediate past state deputy and current district deputy of Aroostook County Knights of Columbus chapters, said only 11 other councils in the state have received the honor.

The three individual accolades needed to qualify are the Columbian Award, the Father McGivney Award and the Founder’s Award.

The Columbian Award is given to councils that demonstrate charitable outreach. Councils need to hold programs based on four categories — faith, family, community and life — in order to meet the requirements. 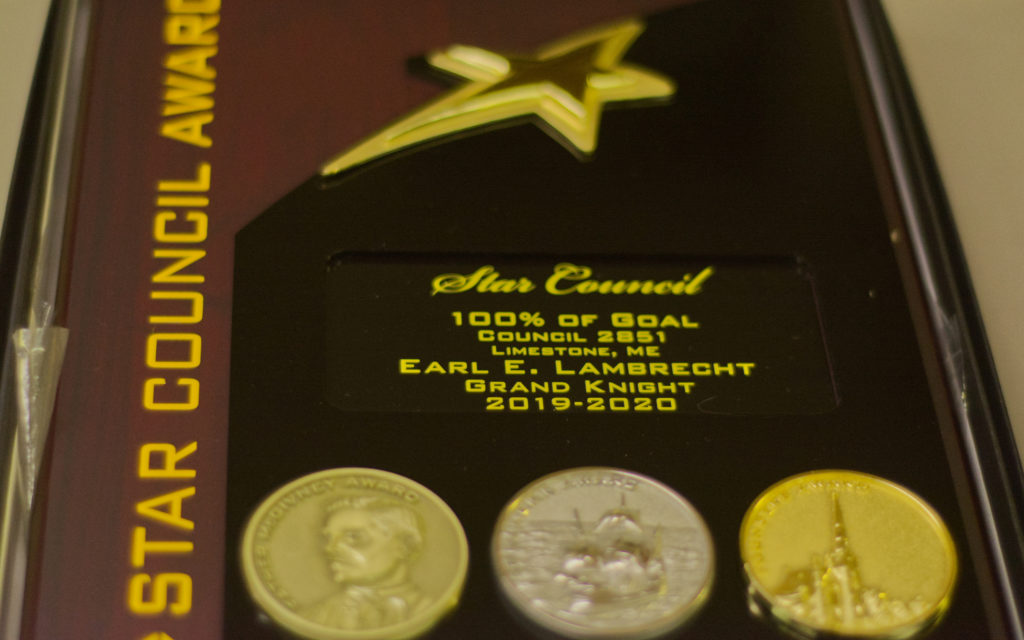 The Limestone Knights of Columbus recently received the Star Council Award, an honor that only 11 other councils in the state have received. (Chris Bouchard | Aroostook Republican & News)

Due to the pandemic, Bourgoin said requirements for these individual accolades were scaled down to accommodate the fact that many churches were closing and that it had become increasingly difficult for many to complete the required projects due to restrictions set in place.

For the Father McGivney Award, for example, the council normally would have needed to add four new members, but this was scaled down to two. And for the insurance side, he said the organization was able to hold around 30 virtual meetings with their general agent Greg White between April 1 and the end of June.

Bourgoin said that while he is not specifically a member of the Limestone council, he is a resident who attends the St. Louis Catholic Church where their meetings are held and the award was given out on Nov. 15.

“This award happened during my time as boss of the state [Knights of Columbus], and it was great being able to present this to a council in a church that I normally sing music in and do a lot of other activities in,” he said. “I actually belong to the Fort Fairfield council, but this is still my church.”

As district deputy, Bourgoin visits councils throughout the region, and will often attend mass, participate in dinners, and make presentations at various council locations throughout The County.

Altogether, he said he works full time while holding down about eight different volunteer jobs through the Knights of Columbus.

Limestone Council Financial Secretary Mike Legassie said the council is very happy to have been able to attain the high honor.

“It feels great,” he said. “To be able to get all of that done within minimal time and during COVID was quite an achievement. We’re very happy.”

Grand Knight Stephen Brooker said that the award was thanks to participants and volunteers all coming together to help the community.

“Everybody’s pretty humble,” he said. “We appreciate the recognition, but we worked hard. Everyone kicks in in their own way; it’s not just one person that does one thing.”

Rep. Joseph Underwood, R-Presque Isle has been appointed to serve on the Legislature’s Agriculture, Conservation and Forestry Committee.
Pets END_OF_DOCUMENT_TOKEN_TO_BE_REPLACED