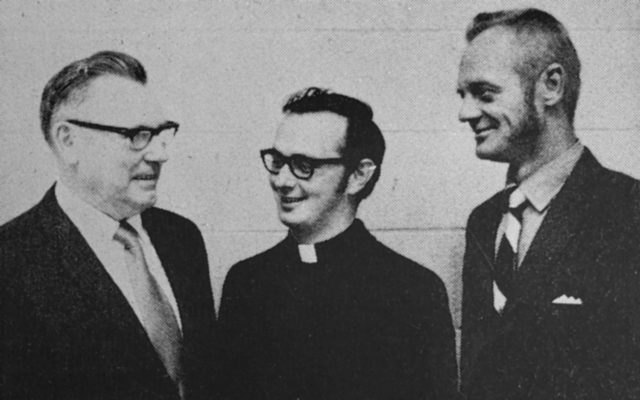 Aroostook boys at National Convention — Carl Berglind and Howard Holmquist of Westmandland and Alwin Espling of Stockholm represented Aroostook County 4-H Clubs at the National Vegetable Grading Convention at Cincinnati, Ohio. This team won the county vegetable vegetable grading contest conducted by Aroostook 4-H clubs the previous summer. While at the convention, they competed in vegetable grading with teams of 4-H boys from all parts of the country.

Maine Legion Dept. reached 11,200 members — Well started in its membership campaign for the coming year, the American Legion in Maine had 11,200 members as of December 1945, compared to 6,920 a year prior, it was stated by Department Adjutant James L. Boyle. The increase was largely due to the joining of World War II veterans Boyle added with a prediction that American Legion membership in Maine would pass the 20,000 mark in 1946. The Legion year started Oct. 20. The total in 1945 was 13,028.

Retired after 20 years at AEF — Roger M. Cobb, superintendent of the Aroostook Experimental Farm since 1951, announced his retirement in March 1971. During his 20-year period, Cobb served under three directors of the Maine Life Sciences and Agricultural Experiment Station and assisted agricultural scientists from the departments of entomology, plant pathology, plant and soil sciences, and agricultural economics and agricultural engineering at the University of Maine at Orono. Aroostook Farm is the field laboratory where UMO scientists conduct their potato, grain and sugar beet research. A superintendent, Cobb was responsible for managing 260 acres of cropland in support of these research efforts.

Congratulations offered — Cheryl Garland, daughter of Mr. and Mrs. Ferland Garland of Presque Isle, was congratulated by E. W. Ukkelberg, senior vice president of Deere and Company, for her achievements at the National 4-H Club Congress. Cheryl was a Maine State Conservation winner and received an expense-paid trip to the Chicago conference as a prize for her achievements.

Rotary Auction brought in over $61,000 — The 48th annual Presque Isle Rotary Auction brought in over $61,000 for community projects in its three-day run. More than 90 percent of the club’s 110 members shared the workload in the prime fundraiser of the year, said co-chairmen Mark Putnam and Brett Varnum. They met their goal for the hardwood floor project at the recreation center with over $21,000 raised; in gold bricks, 17 were purchased, which provided for a 10-year commitment of $100 per year. The auction was transmitted live from the Northeastland Hotel on Paragon Cable channel 9 and Channel X radio. The event included over 700 items in value from $5 to $2,200 with a total value of all donated merchandise of approximately $40,000. The special project was a new floor and heating system for the Presque Isle Recreation and Parks Center gymnasium.

Ashland student nominated for national award — Kristina Caron, a senior at Ashland Community High School, was nominated to compete in the National Principal’s Leadership Awards Scholarship Program (PLA), sponsored by the National Association of Secondary School Principals (NASSP). While at Ashland, she had been a member of National Honor Society, Student Council, Model State Legislature, Band, Bodacious Brass Band and ADAPT (Alcohol Drug Abuse Prevention Team). She had been on the basketball, soccer and cross country teams and had lettered in all three. She planned to attend Sacred Heart University, Worcester State College, the University of Maine or the University of New Hampshire, and major in occupational therapy.