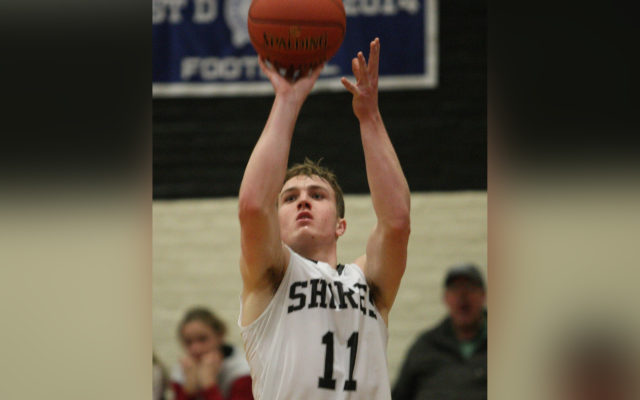 The top sports stories of 2020 in southern Aroostook (Part 1)

Editor’s Note: The following is the first of two articles highlighting some of the top sports stories from 2020. This article highlights events from January to June. The second installment will appear in the Jan. 6 issue.

The Houlton boys basketball program added a new member to its 1,000-point club.

Keegan Gentle, the son of Heath and Cheryl Gentle of Houlton, scored the 1,000th point of his career Saturday, Dec. 21, 2019, in a game against Ellsworth. A senior and four-year varsity player for the Shires, Gentle’s historic points came on a layup with just 10 seconds to play against the Eagles.

The Southern Aroostook girls basketball team continued to dominate the competition as the season neared the midway point. The Warriors rattled off seven consecutive victories and were unbeaten this year. Likewise, the Southern Aroostook boys enjoyed great success and were in the midst of a five-game win streak.

Success finally arrived for the Black Hawk hockey program as the team skated toa 4-0 victory over the Capital River Hawks at the John Millar Civic Center.

Home court proved advantageous for the Central Aroostook Middle School cheering squad as the Panthers reclaimed the Aroostook League Middle School championship trophy. Featuring the smallest squad of the four competing groups, the Panthers put forth an energetic and entertaining routine that featured a number of acrobatic stunts and plenty of tumbling. Houlton Middle School finished as runners-up in the competition, which also featured Presque Isle and Caribou.

In the high school competition, Central Aroostook also took home top honors, while Houlton was named second place, Presque Isle was third, Southern Aroostook was fourth, and Caribou was ranked fifth place during the competition held at Caribou High School. The Shires went on to place fourth in the regional competition at the Cross Insurance Center in Bangor, earning a spot in the state meet.

The Houlton Football team had its strongest showing since the program’s inception at the Little Ten Conference awards banquet with 15 football athletes being recognized for their accomplishments in the classroom and on the field of play. Noah Reynolds was recognized as the Houlton High School LTC Player of the Year nominee for leading all of Class D North in rushing with 1,086 yards, while scoring 10 touchdowns.

A small field of 24 runners turned out for the annual Moosestompers 5K road race. Zackary McAllister was the overall race winner as he completed the 3.2-mile course in 19 minutes, 25 seconds. Teanne Ewings was the first female finisher, and second overall, at 19:49.

Seven of the 10 squads in the Houlton Pioneer Times’ coverage area qualified for the playoffs. Both Houlton squads finished as the No. 5 seed in Class B North. The Hodgdon girls experienced one of their best seasons in recent memory with a 13-5 record under coach Wendell Harvey, as the ninth seed in Class C North. game. In Class D North, the Southern Aroostook boys and girls, Katahdin girls and Greater Houlton Christian Academy boys were all playoff bound.

Hopes of a third straight state championship fell just short for the Southern Aroostook girls basketball team, in a rematch of last year’s finale. The Warriors fell 42-38 to Greenville at the Augusta Civic Center, giving the Lakers their first state title since 1978.

Nine Aroostook County basketball players are among the 98 student-athletes invited to participate in the 40th annual Maine McDonald’s All-Star High School Senior Basketball Games in partnership with the Maine Association of Basketball Coaches. Representing the North in the girls Class C/D game were Breann Bradbury of Central Aroostook and Makaelyn Porter of Southern Aroostook. Representing the North in the boys AA/A/B game were Alex Bouchard and Parker Deprey of Caribou and Keegan Gentle of Houlton.

Faith Sjoberg of Presque Isle and Dawson Watson of Fort Fairfield were also chosen to compete in the free throw shooting event.

Tim Brewer, who led the Houlton High School boys basketball team to a 57-24 record in four seasons and the 2019 Class C North championship, stepped down from his post.

Several Houlton hockey players received accolades for their efforts on the ice this past season. Named to the first-team all stars was Jason Collett, while Houlton’s Jed Gilpatrick was named to the second-team All Rookie. Receiving honorable mention was Noah Reynolds and Nate DeLucca was named to the All-Academic team.

Siblings Teagan and Teanne Ewings of Houlton are no strangers to running. The sisters can normally be spotted jogging along one of the Shiretown’s many side streets getting in their daily workouts. They are also among the top finishers at most every local road race held throughout the summer. Over the years, the two siblings have logged countless miles and were now able to say they completed a marathon of sorts.The two girls completed a 26.2-mile run/walk as a way to both test their physical fitness and foster hope for residents of the Shiretown during the COVID-19 pandemic.

Baseball, softball, tennis and track athletes were denied a chance to compete as all local high school spring sports were canceled due to the COVID-19 pandemic.

It was a summer without organized youth sports for children in southern Aroostook County this year. The Houlton Area Little League, as well as First Pitch, T-Ball and youth basketball and soccer offered through the Houlton Recreation Department, were all canceled this year due to the COVID-19 pandemic.

The closures also extended to the Recreation Department’s Just For Kids summer day program. That program provides children with a schoollike setting featuring arts and crafts, games and activities. The program also traditionally culminates with the annual Peanut Carnival, which features a variety of classic games run by the children.

Bruce Nason, a longtime fixture inside gymnasiums and sports fields at Houlton Middle-High School, retired after 40 years in the district.

It was a freezing day across The County, but you could hardly tell from the turnout. Even after a massive surge in absentee ballot requests across the Central Aroostook area, droves of people came out to vote in Presque Isle, Mapleton, Washburn and Fort Fairfield.
Pets END_OF_DOCUMENT_TOKEN_TO_BE_REPLACED