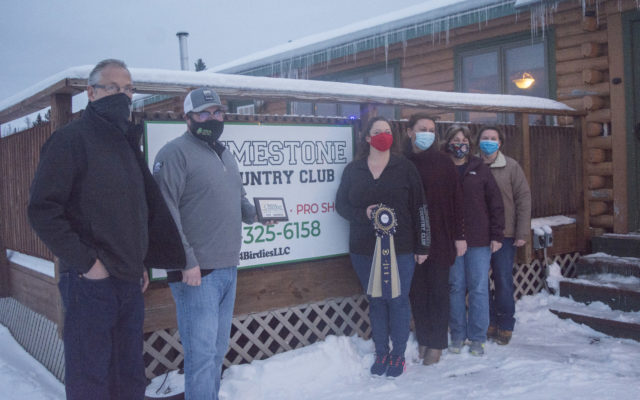 Chris Bouchard • January 8, 2021
Bradlee Boyles has been working to expand the Limestone Country Club into a place where not only men, but women and children, are encouraged to golf, in addition to a restaurant featuring activities like darts and a growing arcade.

LIMESTONE, Maine — Bradlee Boyles has been working to expand the Limestone Country Club into a place where not only men, but women and children, are encouraged to golf, in addition to a restaurant featuring activities like darts and a growing arcade.

The Limestone Development Foundation/Chamber recently honored the business and its progress during a Jan. 6 ribbon-cutting event.

Boyles is the chief executive officer, chief operating officer and managing member of 4Birdies LLC, which purchased the country club from the Loring Development Authority in July 2020.

The company gets its name from the term “birdie,” which in golf means that a player completed an individual hole with one stroke under par, and the fact that it consists of four individuals: Boyles, his wife Erica Boyles, and business partners Mark Bailey and Natasha Brewer.

Before obtaining the country club, Boyles spent 20 years working for the city of Presque Isle. He began coaching baseball in 1997 and by 2017 he was the program director for the city’s parks and recreation department.

He was inspired to leave his 6post and find an opportunity to own his own business and to be with his three children, ages 9, 6 and 2.

“At the rec, I was always working with kids, but I never got to see my own,” he said. “I’m out the door at 7 a.m. and back home at 7 p.m. They’re either in bed or off to school when I leave and by the time I got home they were already in bed.”

He said the move from program director to owning a golf course has actually improved his family life. He can see his kids more, and even occasionally bring them to work with him.

“The big jump was trying to make life better not only for myself, but better for my family also,” he said.

It doesn’t hurt that Boyles has been playing golf since 1985 and has a genuine passion for the sport.

Before purchasing the country club, he began managing the course in 2018, and since then the club’s membership has grown from 37 to 128.

“To increase your population in a place where the overall population is decreasing is pretty big, so when I had the opportunity to lease the place again [in 2020] I said ‘No, I’d rather buy it.’ I knew what I saw in front of me could be really big,” he said.

Boyles said he added the restaurant side in order to help profits, a decision that not only helped the business grow, but also allowed them to offer a service throughout the winter months.

“Not only did we buy a golf course, but we ultimately bought a restaurant too — or at least changed it into that to get us through the winter time. It’s always been closed in the winter, so we’ve done a few things to make it year-round,” he said.

And though the course was purchased amid the COVID-19 pandemic, Boyles said business has been great so far.

“We had a phenomenal summer,” he said. “There have been other golf courses shut down locally because they’re either near or on a border, and we’ve benefited from some of their members coming this direction. We’re also increasing the population of people coming here who aren’t golfers.”

And because golfers are typically far apart from each other, meeting social distancing guidelines has not been an issue.

“In the golf world, social distancing has been going on for 180 years — pretty much for the entirety of golf’s existence,” he said. “So that wasn’t too hard, and people were pretty open to getting out and golfing. We’ve done everything we need to, COVID-related, to make sure the golf world would still happen.”

But for the restaurant side, he said there are quite a few restrictions and guidelines they need to follow. With current restrictions, he said there isn’t really a bar scene anymore, but they do have a bar where patrons can sit and have drinks while they eat. A room to the side of the bar also features dart boards and arcade machines, which Boyles said he hopes to purchase more of in the future.

As far as meal recommendations, he said the best breakfast they offer is the B-52 Bomber.

“It’s a fully loaded omelette with sausage gravy on the top and a bloody mary to go with it,” he said. For lunch, he said their “steak and cheese has been the killer.”

And while there are future plans to build a new kitchen and to create a lounge area separate from the dining room, he said for the time being they are focusing on getting through while adhering to the current state guidelines.

“We’re doing whatever we can to make sure everybody is safe,” he said. “Our restaurant is going to be successful, and we’re going to get through all of this as a group together.”

“We’re really hoping it’s not too much longer,” he added.

With golf being a sport primarily dominated by men aged 28 to 80, he said he’s working to target women and children.

For women, he said they’re offering programs that aren’t offered to the men. One, called “Wine and Nine,” involves a group of women coming for five weeks of lessons. They’re given a glass of wine before the lesson and then another afterward while the class reviews their progress.

For children, he said all kids up to the age of 17 are able to golf for free.

“We’re guaranteed to have men come back, because it’s golf, and that’s what they do,” he said. “But now we’re trying to create a family atmosphere for golf rather than the stuffy — what you see on TV — everybody in their tight slacks and polo shirts. We’re trying to create something more family oriented that people can enjoy as entertainment.”

He said the facility plans to offer snowshoeing, cross country skiing, and to build a little sliding hill out front for kids with the help of a couple local snowmobile clubs. Boyles said he’d also like to eventually hold a classic snowmobile show.

“But we don’t want to push the limit where we’re overstepping our boundaries with state mandates,” he said. “We want to make sure we’re staying compliant, so until the mandates are loosened we’re trying to do it slowly. I think it’s important that we follow that and that everybody’s safe.”