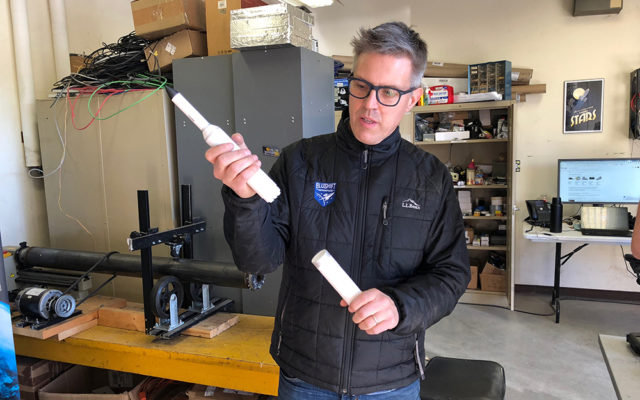 The launch was originally planned for late 2020, but it was delayed as testing revealed new possibilities to enhance the rocket’s design.

Organizers intend the launch to show the power of bio-derived carbon-neutral rocket fuel in action, and to demonstrate the commercial demand for suborbital launches by carrying commercial payloads.

Seth Lockman, bluShift Aerospace communications director and a 2011 MSSM graduate, said the event will show the benefit and potential of non-toxic fuel, which he said is so innocuous that it could even be ingested without causing notable harm.

The event will be the world’s first commercial launch of a single engine rocket powered by biofuel, according to a press release issued on Jan. 12, which added that the event is the culmination of six years of research and development, over two hundred engine tests, “the successful realization of grants from NASA and the Maine Technology Institute, and the development of a novel modular hybrid rocket engine.”

The event itself will occur from 7 a.m. to 9 a.m., with the rocket itself launching at 8 a.m.. In addition to Lockman, CEO and founder of bluShift Aerospace Sascha Deri, PR consultant Betta Stothart, and bluShift engineers Brook Halvorson, Luke Saindon, Michael Ostromecky, Steve Savoie and Ben Lemieux will be in attendance.

A select group of spectators and honored guests will be welcomed to the staging area at 7 a.m. on launch morning, where they can view the rocket and learn about the technology behind the hybrid rocket engine. Remarks will be given at 7:30 a.m., and a celebration and closing comments will occur at 8:30 a.m.

Though the event is invitation-only, it will be livestreamed on YouTube. A link to the stream will be available on the event page for the launch.

Next year's Caribou City Council will include a new member and a longtime councilor thanks to Tuesday's election.
Pets END_OF_DOCUMENT_TOKEN_TO_BE_REPLACED

Everyone who enjoys the company of a dog knows that sometimes dogs have strange behaviors.  They may arrive in your life with the behaviors already in place, or perhaps they are adopted as a puppy and develop a behavior young.
What's Happening This Week END_OF_DOCUMENT_TOKEN_TO_BE_REPLACED