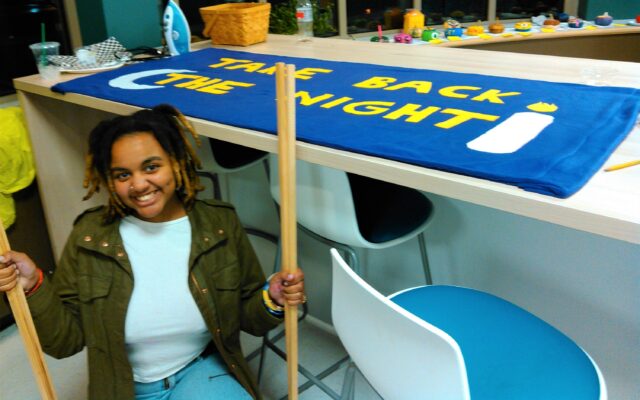 In a virtual poetry slam, Black Slam, the University of Maine at Presque Isle Black Students Union members, students from Orono and others shared poetry in an interactive experience that BSU president Ines Ngoga said led to spontaneous sharing by those involved.

“Initially, I had six to read,” she said. “[But while it was going on] I had people texting me that they felt inspired to read too … at one point there were 22 people and 15 poems were read by 11 poets.”

Black Slam was planned as a way to recognize Black History Month in February and despite COVID-19 restraints, the student-planned event is one Ngoga hopes will continue even after in-person restrictions are lifted because the online format made it more comfortable for some students to share their work.

“As a campus, we’ve made diversity, equity, and inclusion priority areas of focus. Having student club-hosted events like the incredibly engaging Poetry Slam that our Black Student Union hosted during Black History Month not only helps to support the work we’re doing, it also engages our campus in a very compelling way with these topics,” UMPI President Ray Rice said. “We are looking forward to offering and encouraging more opportunities for dialogue and understanding.”

A poet since she was 12, Ngoga was spurred to hold the event by national poet laureate Amanda Gorman who performed her poem, “The Hill We Climb,” at President Joe Biden’s January inauguration.

“She was definitely one of the inspirations for this,” Ngoga said. “Music is poetry. It is an outlet for people and just seeing the reception she [Gorman] received, I saw the way people reacted, she definitely played a part [in our decision].”

Gorman, 22, the nation’s youngest poet laureate, mesmerized viewers on Jan. 20. And in this excerpt she offers hope to the nation and inspired those who dream of more: “Somehow we’ve weathered and witnessed

a nation that isn’t broken

We the successors of a country and a time

only to find herself reciting for one …”

The university’s BSU was founded in 2017 by then student Riana Teixeira, who received her degree in social work in 2020. Teixeira performed at Black Slam with a poetry reading and by singing a Black Lives Matter chant, according to Ngoga.

“Clearly, UMPI is a predominately white institution. We are situated in a rural area and the local demographics are reflective of the population in northern rural Maine. Diversity on campus is essential but for urban students of color, culture shock can be overwhelming,” Shirley Rush, UMPI professor of social work and BSU adviser, said. “Having an organization, diverse though it is, (not all members of BSU are black, not all are urban, not all are out of state students) where students can come together without having to explain who they are or where they come from or why they wear their hair the way they do, is a welcome and necessary sanctuary. BSU is a safe space.”

Last summer, during the Black Lives Matter protests following the killing of George Floyd in Minnesota, UMPI stepped forward, taking the lead in support of the movement and denouncing racist behaviors.

“We say Black Lives Matter. Period. We recognize that to reach our goals — to be student-focused every day, to be a great university to work for, and to uphold the principles of equity and justice — we must add our voices to the Black Lives Matter Movement,” a statement from the university administration read.

And according to Ngoga, the university statement is more than words.

“The demographics are changing enough to notice,” she said, referring to the university population. “We must make sure we evolve with them … President Rice came to a BSU meeting. He asked us questions.”

Ngoga mentioned a new scholarship, the George Floyd Memorial Scholarship, funded by the UMPI chapter of Associated Faculties of the University of Maine as an example of specific efforts taken to back the administration’s earlier statements about supporting people of color at the university.

“I am honored to have been chosen as the adviser to BSU. I am proud of our students for their academic, civic and athletic contributions to UMPI and the greater community,” Rush said. “In addition to this poetry event, BSU has done fundraising for a student family whose house was destroyed in a fire, annually sponsors the Take Back the Night event held in October and has participated in numerous events on campus as volunteers to foster understanding around the issues of diversity.”