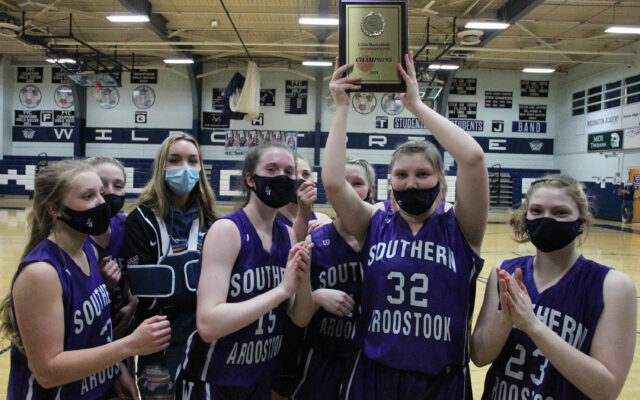 Joseph Cyr • March 11, 2021
Championship games can bring out the best in a team, especially when that team is facing adversity.

PRESQUE ISLE, Maine — Championship games can bring out the best in a team, especially when that team is facing adversity.

Such was the case for the Southern Aroostook girls basketball team Wednesday evening as the Warriors took on Presque Isle for the Aroostook County girls title.

Down two starters, Division II champ Southern Aroostook took a page from the New England Patriots playbook and used a “next man up” mentality to rally from a six-point deficit in the fourth quarter to beat Division I champ Presque Isle, 64-58, and win the Aroostook County crown. 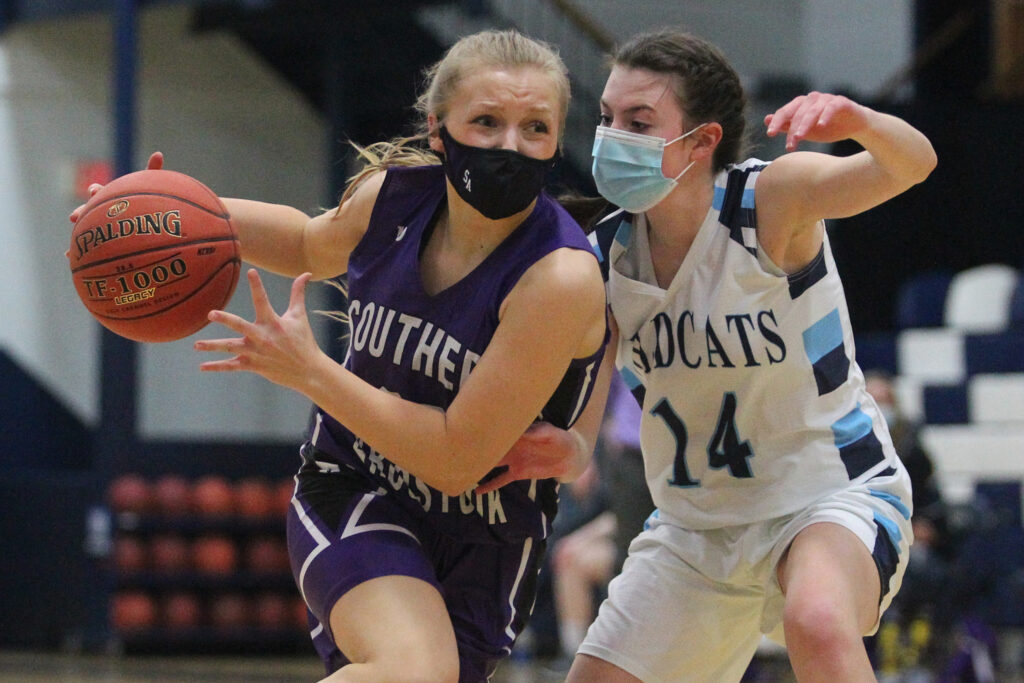 “I think our kids showed tremendous grit tonight,” Southern Aroostook coach Cliff Urqhuart said. “I am extremely proud of this team. All year, we had one goal in mind. We didn’t know what the season was going to look like. We hoped there would be a playoff and we were going to try to win it.”

The Warriors (15-1 overall) had four players score in double figures as Madison Russell poured in 17 points, while Kacy Daggett and Madison Shields both chipped in 16 and Cami Shields added 13. Jennah Brooks had two. 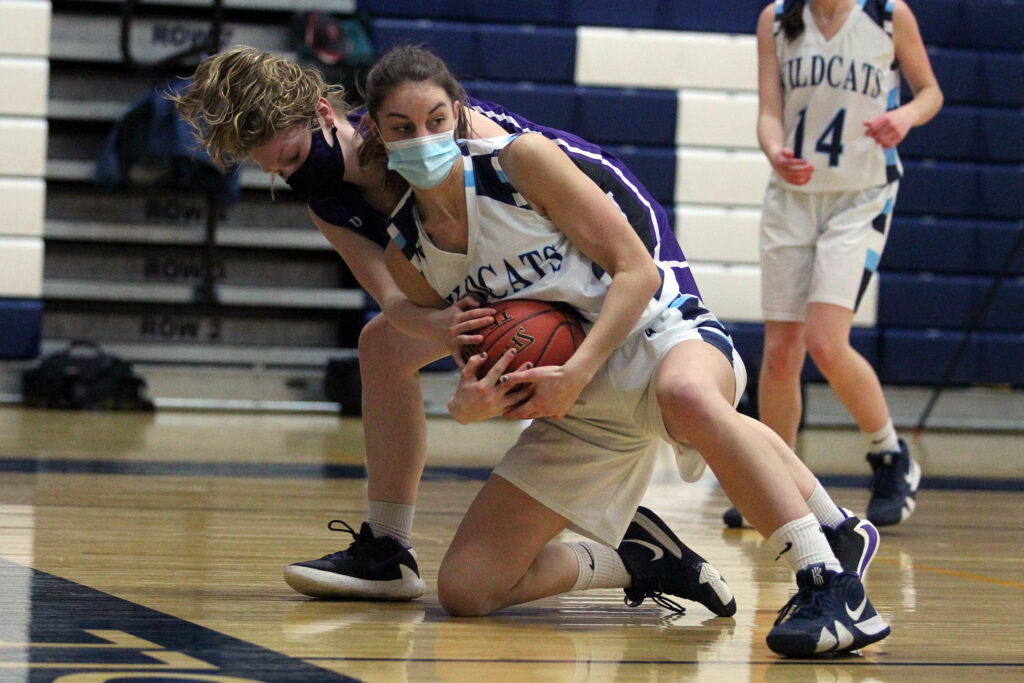 For Presque Isle (14-1), Faith Sjoberg led the way with 22 points, while Juliana Morningstar and Rhylee Kinney both had 10, Meg Casavant added eight, Anna Jandreau had six and Sadie Lapointe had two.

Southern Aroostook’s lone loss on the year was a 25-point defeat (55-30) by Presque Isle earlier in the season. Coach Urquhart used that loss as a strong motivational tool. 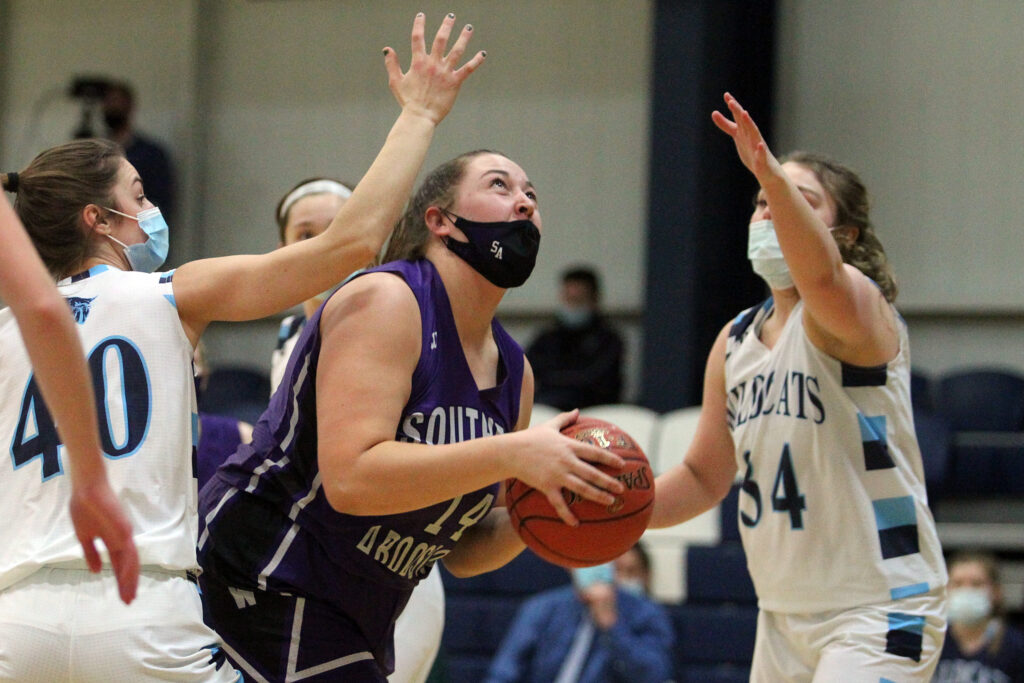 “I am always trying to find ways to motivate the team,” Urquhart said. “After that loss in PI we were all in the locker room and we got together and made a commitment to get back to PI, figuring it might be the Aroostook County championship.

“We took something that we bring to all the games that has been a very valuable item to the team over the years, and hid it under one of the ceiling tiles in the PI locker room,” the coach continued. “If we didn’t make it back there, we might never get the item back. The rest is history.” 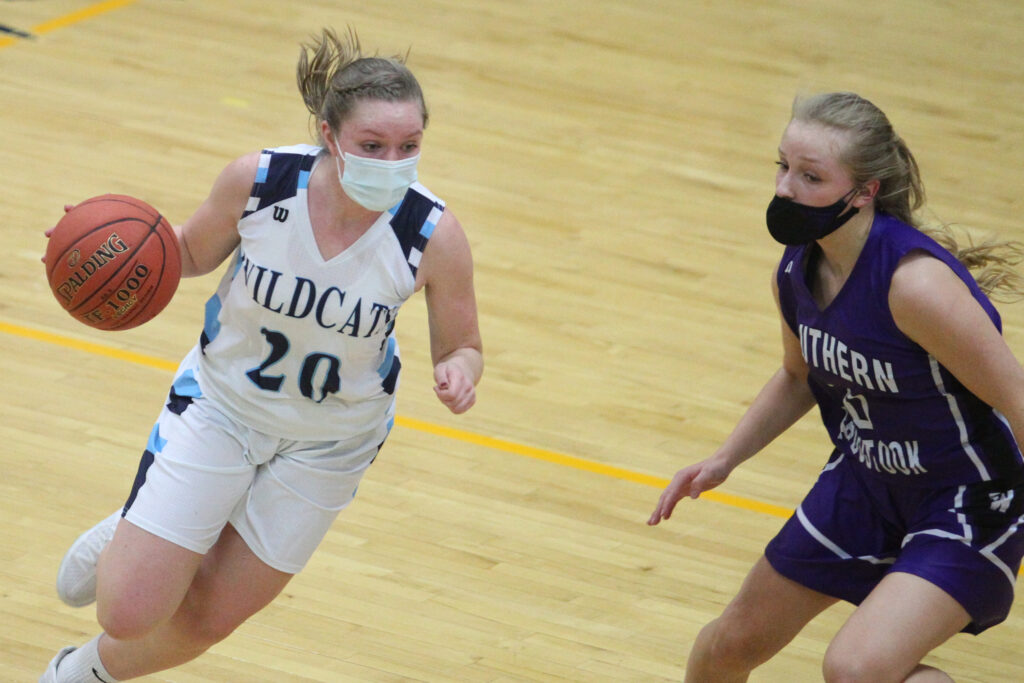 In a game that featured six lead changes, Wednesday night’s championship was filled with a number of memorable moments — including baskets at the buzzer to end both the first and third quarters.

Southern Aroostook brought a much different approach to Wednesday’s championship game. Instead of the Warriors’ traditional frantic, full-court pressure defense, the team decided to use a more methodical tactic seeing as how they suited up just eight players for the game.

“Our game plan coming in was to slow down the pace of the game,” Urquhart said. “We knew we could run if we had to, but we really wanted to slow things down.”

Southern Aroostook took a quick 4-0 lead by attacking the basket early and managed to hold a 17-11 advantage at the end of the quarter. 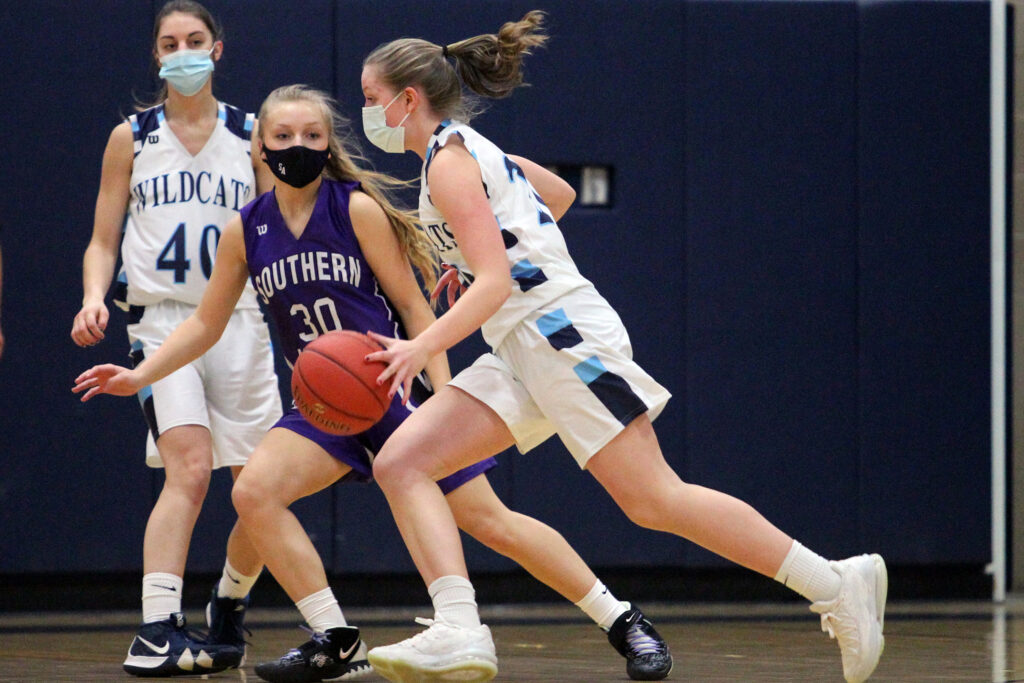 “We didn’t do the little things that were needed,” PI coach Jeff Hudson said. “We knew we had to stop their presentation, but they [Southern Aroostook] got right to the basket. And we just got killed on offensive rebounds.”

Presque Isle came out firing to start the second period, as Sjoberg and Casavant both hit 3-pointers to tie the game (17-17). The two squads swapped baskets for much of the second quarter, with neither team leading by more than five points.

SA closed out the first half with a 3-pointer and a pair of free throws by Maddie Shields to tie the game at 30-30. 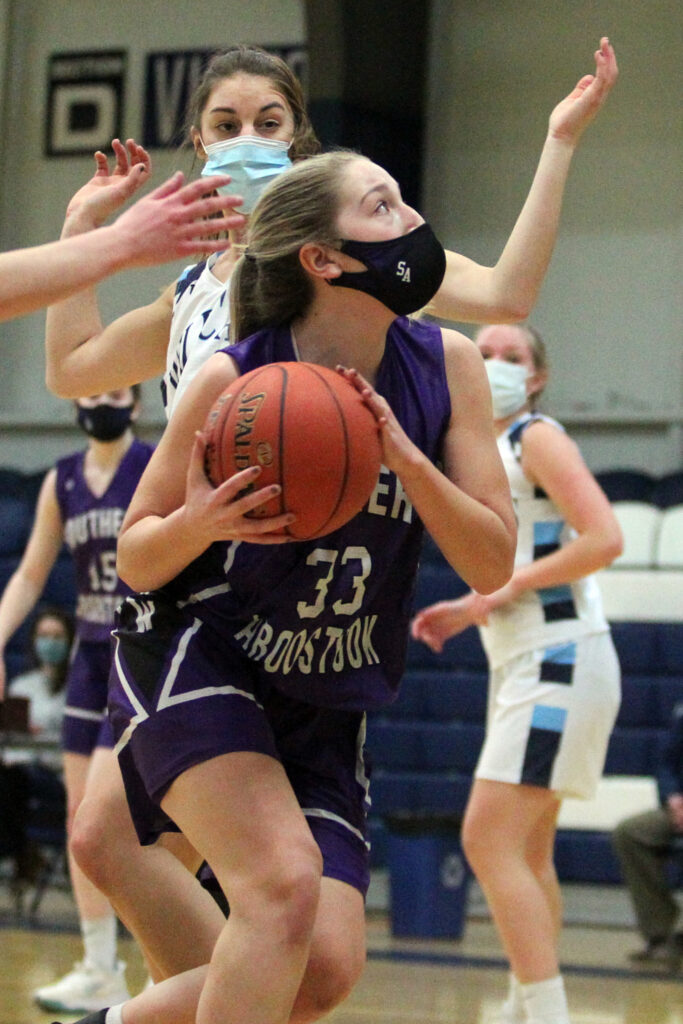 Presque Isle ramped up its offensive output in the third quarter, pouring in 20 points and took advantage of a number of turnovers by the Warriors to snatch a 50-45 lead.

Things looked promising for the Wildcats as the team led for much of the fourth quarter, but the Warriors refused to back down. Southern Aroostook used a 7-0 run to reclaim the lead, 58-57, with 3:08 to play.

Presque Isle never led again as Southern Aroostook chewed precious seconds off the clock, while managing to push its lead to five, 62-57, with 56 seconds to go. 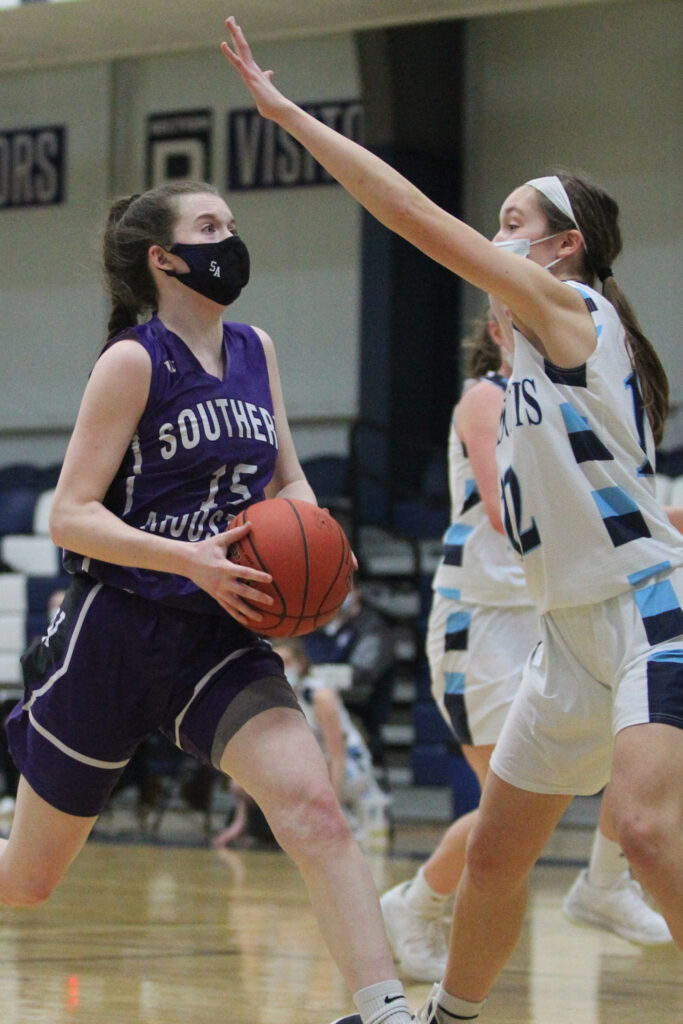 Things took a turn for the worse for the Wildcats when Sjoberg left the game with 44.7 seconds remaining after falling awkwardly to the ground in a scrum for a loose ball. The talented junior suffered a shoulder injury and had to be taken to the hospital for evaluation.

It marks the second straight game Southern Aroostook has played where someone suffered a shoulder injury. Warrior senior Emma Nadeau separated her shoulder in a similar fashion in the Division II championship game against Wisdom Monday, March 8.

Presque Isle had a couple of good looks at 3-pointers, but was unable to find the bottom of the net in the final minute of the game.

“After our last game [against Presque Isle] we really wanted to have another shot and get some revenge,” Russell said. “It was even more exciting to do that tonight than I thought it would be. We really came up clutch at the end.” 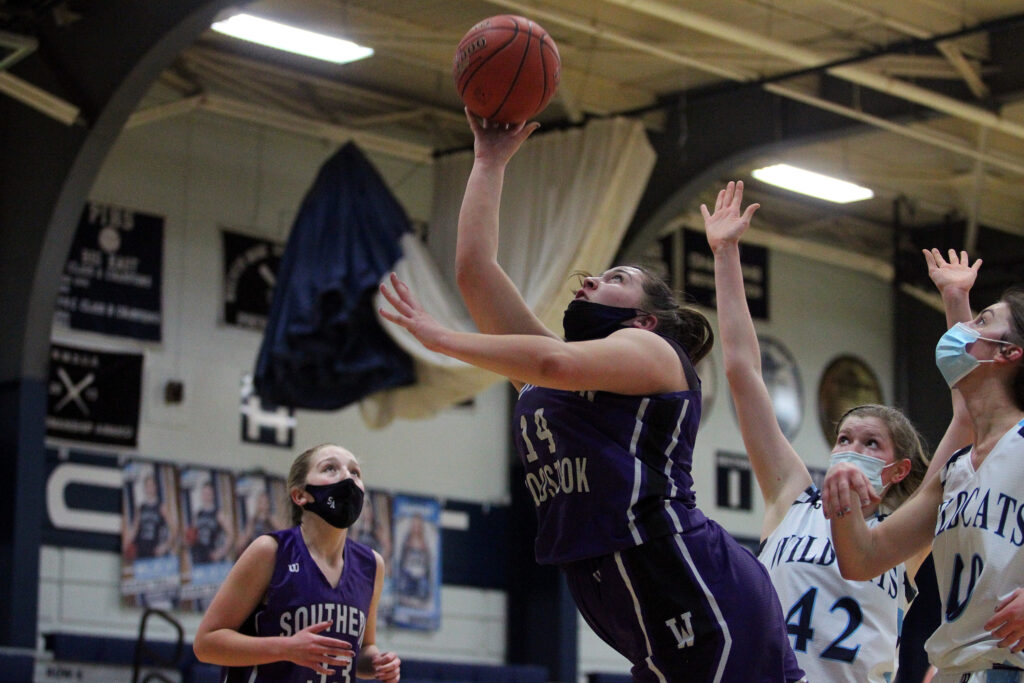 Overcoming adversity has been somewhat of the norm for Southern Aroostook in recent weeks. The team played with just an eight-player roster Wednesday as both Nadeau and fellow senior Paige Vose did not participate in the game.

The team has also been unable to hold any practices on its home court after a March 3 tractor fire at Southern Aroostook Community School resulted in the building being closed for a few weeks. The Warriors were able to move their practices 21-miles north to Houlton Middle-High School during that time.

“I have to give Southern Aroostook all the credit in the world,” Hudson said. “We had no intensity tonight and they played great. They deserved to win tonight.” 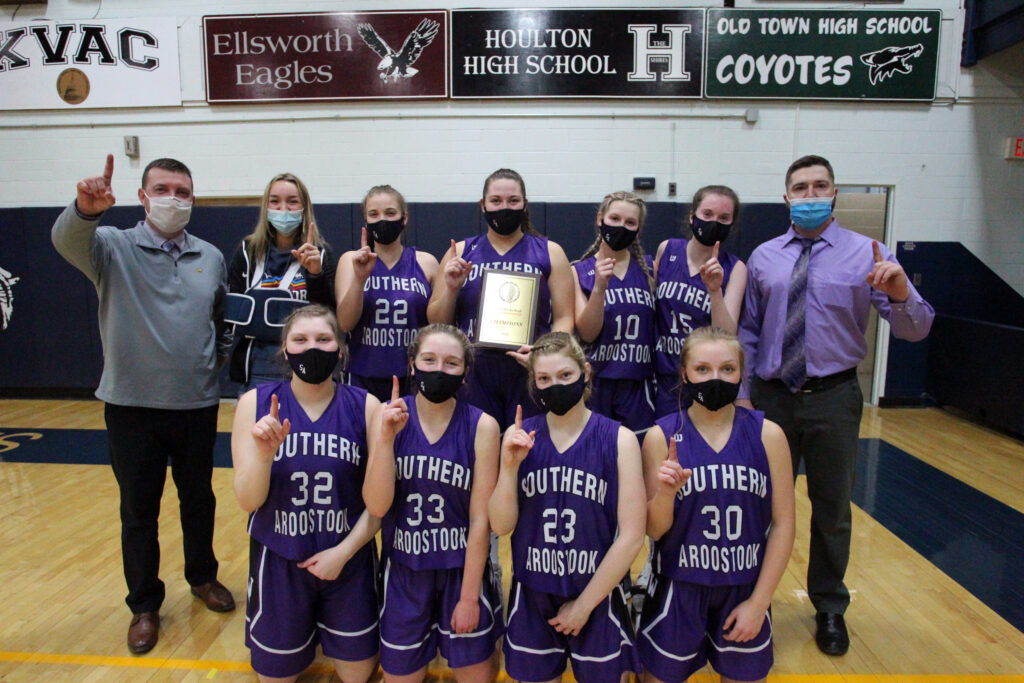