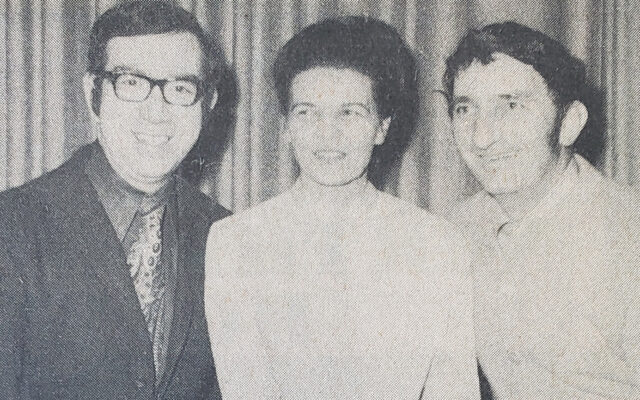 Yvonne Tardie • March 17, 2021
75 Years Ago -   March 14, 1946 Richard Martin was promoted -- Sgt. Richard A. Martin, son of Mrs. Simon Martin of  Presque Isle, was promoted from corporal. He was with the 6677th Disciplinary Training Company, a unit of Peninsular Base Section, the Army Service Force in Italy.

Richard Martin was promoted — Sgt. Richard A. Martin, son of Mrs. Simon Martin of  Presque Isle, was promoted from corporal. He was with the 6677th Disciplinary Training Company, a unit of Peninsular Base Section, the Army Service Force in Italy.

The Peninsula Base Section served and supplied Fifth Army and the ground crews of the United States Navy and Air Force in the Mediterranean Theater of Operations during World War II.  The Base was commanded by Brigadier General Francis H. Oxx. A member of the Army since March 1943, Sergeant Martin served overseas in Italy for 14 months.

Donations made by No. 32 — Margaret Adams, Noble Grand, presided at the meeting of Aroostook Rebekah Lodge No. 32 March 2, at the Blake Street Recreation building. Donations were made for the Eye Bank and Visual Research program and the Educational Foundation Fund, both programs being sponsored by the Odd Fellows and Rebekahs. Notice was given of the opening for campers of Camp Neofa on  July 11. Following the meeting, a program honoring Thomas Wildey, organizer of the IOOF in the United States, and Schuyler Colfax, founder of the Rebekahs, was presented by Mrs. Mary William and Mrs. Ella Stevens.

Third place team won the tourney — A five-game single elimination tournament wrapped up the action in the Presque Isle’s Men’s REcreation Basketball League. Tom’s Market, a team that finished third in the regular schedule, won this tournament by playing the maximum three games. On their way to the title, Tom’s defeated the Centerville Roadrunners, the Sharpe Shooters 96 to 87, and in the championship game they overcame the Humming Birds 101 to 90.

Mars Hill contestants won — During skiing activities March 7 and the Clarence D. Young Memorial held at Bald Mountain, three Mars Hill persons swept the first three places for the five-mile cross country marathon. Placing first in the event was 16-year-old Thmas McCrea. He completed the course in 37:22. Harold Pierce, 26, finished second behind McCrea with a time of 38:15. Coming in third for the Mars Hill group was Michael Barnes, 16, in 38:56.

Hockey players earned postseason honors — Presque Isle High School hockey players Tim Belden, Dan Namur and Owen McMahon were recipients of some postseason honors. All three were selected to play for the East squad in the Class B Senior All-Star game at the Central Maine Civic Center in Lewiston. Belden netted a goal and an assist, McMahon had two assists and Namur was solid in goal, allowing just two goals in his period and a half of play. Belden, a defenseman, was also named an Eastern Maine Class B second team all-stal. Namur and Doug Carlisle received honorable mention honors.

Frazier was appointed to a new position — Amos E. Orcutt, president of the University of Maine Foundation, announced the appointment of Kevin J. Frazier of Bangor to the newly-created position of accounting manager. A graduate of Presque Isle High School, Frazier had worked 12 years in public accounting for the Bangor-based firms of Loiselle & Beatham, Brooks & Carter, and for another eight years, with Tate-Fitch, P.A. Frazier received his B.A. in accounting from Husson College and was a member of the American Institute of Certified Public Accountants and the Maine Society of CPAs.

Barresi joined Million Dollar Round Table — Marcus J. Barresi of Presque Isle was a Knight of the Million Dollar Round Table (MDRT) Foundation, the philanthropic arm of MDRT. Barresi, an 11-year MDRT member, attained MDRT Foundation Knight status by contributing significantly to the organization. Since its inception in 1959, the MDRT Foundation has donated more than $5.8 million to 600 plus charities around the world.