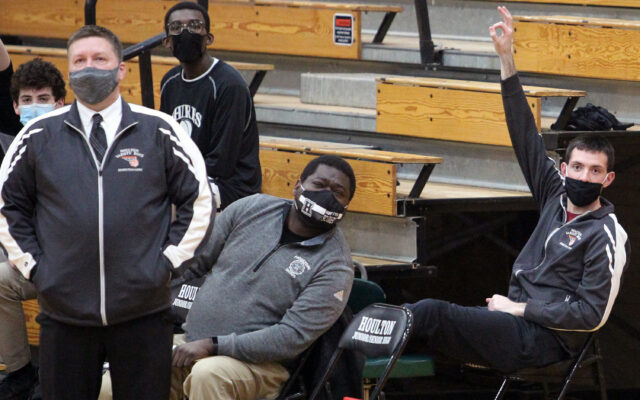 Knee injuries are all too-familiar pain for Houlton senior

But unfortunately for the talented 6-foot, 3-inch, 18-year-old son of Rob and Renae Foley, his season was cut short for the second time in his high school career, due to a serious knee injury requiring season-ending surgery.

Foley was five games into his senior campaign for the Shires when he had an all-too familiar feeling in one of his knees during a Jan. 25 game against Caribou. He went into the locker room with his team at halftime, and tried to return in the second half. On the team’s very first possession, Foley knew his senior season was over.

“I was just going for a steal and I stopped really quick and my knee buckled a little bit,” Foley said. “I tried to run it off, but I knew something was wrong. I had done it before, so I knew what it felt like. Once it happens to you, you just know.”

That all-too familiar feeling happened before on Jan. 10, 2019, during his sophomore season with the Shires. That injury cost him a chance to play in both the regional finals and state championship in Bangor that year. At that time, he suffered a complete tear of his anterior cruciate ligament (ACL) in his left leg, which required surgery to repair.

This time around, it was his right knee, which at first was only a partial tear. He was given two choices — shut it down for the year or try to play with the aid of a knee brace. Foley chose the latter as finishing his senior season was high on his priority list.

While undergoing a workout session with a physical therapist, Foley suffered a complete ACL tear ending his season for good this time.

Or so he thought. 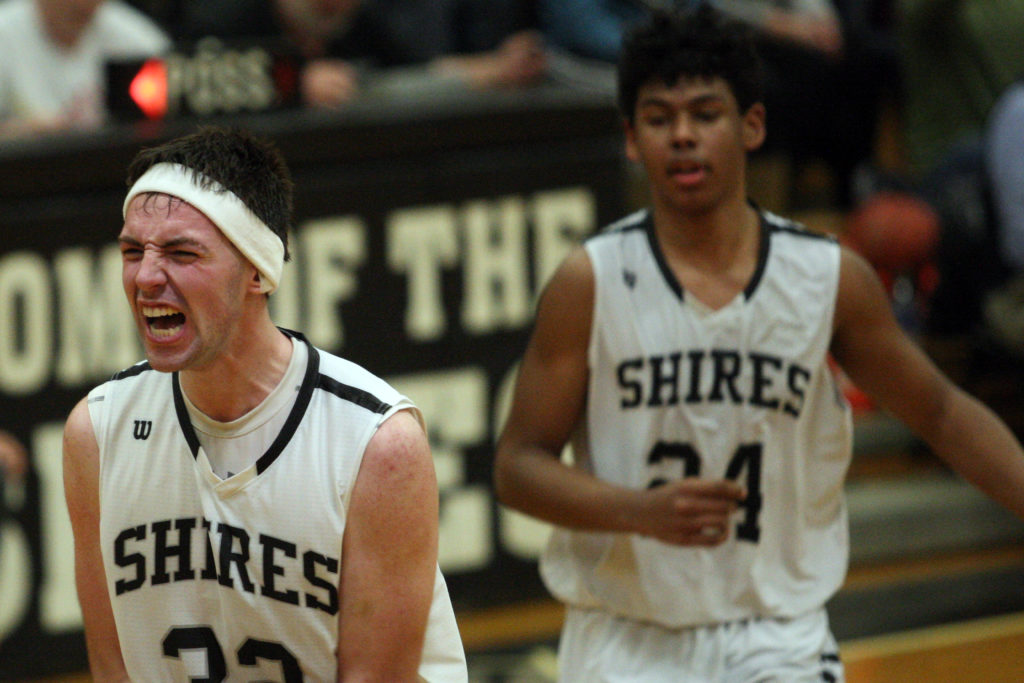 Thanks to his coaches and parents, Foley had one more time to shine on the basketball court on “senior night” for the Shires in a game which ironically enough was also against Caribou. His father asked him to suit up so that he could take a photo of his son in his uniform one last time.

After the introductions and presentation of flowers, coach Travis Gentle gathered his team together. It was then he looked at Drew and said, “OK Drew, you’re starting.”

“I approached [Caribou coach Kyle] Corrigan with the scenario and being the class act he is, he was all for it,” coach Gentle said. “He knew how much it would mean to Drew and his family.  His team was just as glad to see it as ours. I know Coach Corrigan would have done the same thing even if it would have been a ‘normal season.’ I thank them again and am very grateful for them to do that for Drew.”

In that game, the Shires were granted first possession of the ball, which was inbound to Drew for an open layup. He actually missed it on the first try, but put the rebound back in, getting his name into the official scorebook for the night.

“It still brings tears to Renae’s and my eyes when we think about it,” Rob Foley said. “It was very special and we appreciated everyone that made it happen.”

Knee injuries have also been an unpleasant family event for the Foleys. His older sister Hannah tore her ACL in the fall of 2014 while getting ready for soccer season. She was able to do limited cheerleading that winter and had recovered enough by the spring to compete in track and field for Houlton.

His father and mother have also sustained lower leg injuries at various times throughout their lives.

Coach Gentle described Foley as an “unselfish” player who likes to see his teammates succeed.

“Drew works very hard in practice,” Gentle said. “He is always a positive influence and encouraging to the younger players. Drew always wants to learn. He is not afraid to ask questions because he wants to make sure he is doing things right.”

A silent leader on the court, Foley often led by example, rarely showing emotion except for a few of the team’s more exciting games.

“If he saw something he would quietly point it out to a teammate,” Gentle said. “It was never negative. When a teammate would make a mistake he always had what I like to call that ‘come on let’s go’ attitude. Almost as if to say don’t worry about it, we’ve got this.”

His absence on the court was felt almost immediately. “What a lot of people don’t understand is how it hurts a team’s rotation,” Gentle said. “I knew I needed to bring in someone to replace Drew, but then it took away from my bench and rotation throughout a game.

“Losing Drew was a huge loss for us this year,” Gentle said. “It not only took away a senior leader, but another big man — someone to guard an opposing team’s bigs. He is a good defender and presence in the middle.”

Basketball has always been his sport of choice.

“Drew was always tall for his age and he really liked basketball and baseball,” his father said. “He started playing [travel basketball] in third grade for Ben Drew, and then he played many years for AYBL and EMBBL [Bangor area] for Travis and Chad Gentle. He attended the Fort Fairfield Tiger Camps every summer he was eligible. He also played for the AAU team Lumberjacks for Jon Glazier and Chris Lausier. It has been the one sport he knew he could succeed at.”

Drew’s total rehab time is 6-9 months, but Drew said he was motivated to complete his rehab closer to the six-month window. He plans to attend Thomas College, where he will pursue a career in cyber security.

“I have always loved basketball,” Drew said. “It was always my dream to play in and win a state championship. This year it wasn’t even an option, due to COVID, which actually makes this injury a little bit better to tolerate. But this is not the last time I will be on a basketball court.”