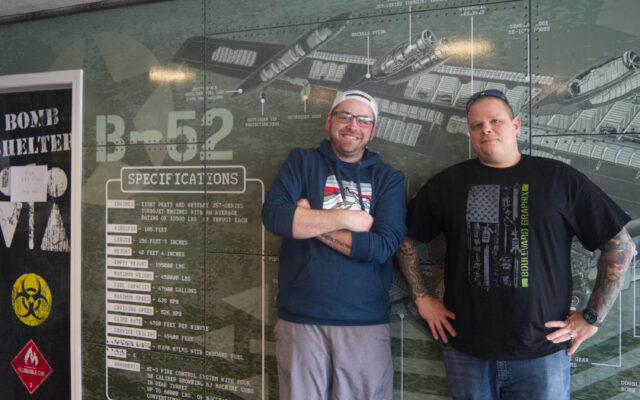 Chris Bouchard • March 27, 2021
From artful countertops detailing the history of Limestone’s former Loring Air Force Base to walls adorned with depictions of parachuting pizza boxes and moose-abducting UFOs, B-52 Pizza & Subs is a love letter to the town and state’s unique history.

LIMESTONE, Maine — From artful countertops detailing the history of Limestone’s former Loring Air Force Base to walls adorned with depictions of parachuting pizza boxes and moose-abducting UFOs, B-52 Pizza & Subs is a love letter to the town and state’s unique history.

The restaurant opened on March 20, and owner Dustin Mancos said on Friday that they have already been overwhelmed with a tremendous community response.

“We’ve had customers come from Fort Kent and Houlton, and one of my college friends even traveled up from Topsham with her wife. We already have regulars. Some people have been here seven or eight times, and the chief of police comes here every day for lunch and dinner. Business has been great,” Mancos said.

Mancos, a Caribou native, owns Winnie’s Restaurant & Dairy Bar in Presque Isle and Burger Boy in Caribou — both seasonal establishments. B-52 will be open year-round.

The idea began in late 2020 through conversations between Mancos and Joe Lapierre, owner of Boulevard Graphix — a Limestone business adjacent to the new restaurant.

Mancos and Lapierre worked together last year to reopen Burger Boy in Caribou. Lapierre helped redesign the restaurant with walls paying homage to the restaurant’s 1950s theme as well as Caribou and Aroostook County.

“Joey’s been trying to get me over here for almost three years, so I finally pulled the trigger and did it,” Mancos said. 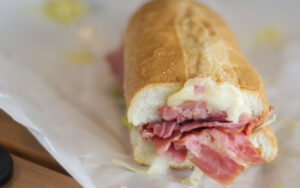 “The Yankee” is one of several themed sandwiches on offer at B-52 Pizza & Subs in Limestone. It contains a corned beef brisket, pastrami, provolone chesse, and deli mustard with Italian dressing and seasoning. (Chris Bouchard | Aroostook Republican & News)

The 20 Main St. building formerly housed Al-Bear’s Restaurant for nearly 10 years and, most recently, Double Play, a restaurant that closed last summer amid the COVID-19 pandemic.

“I think Limestone specifically was a market I wanted to tackle because they didn’t have any other options,” Mancos said. “With the Rendezvous being sold and moving to Caribou, we had an opportunity that just made sense.”

From there, Mancos worked with Lapierre to renovate the 1,200-square-foot building, which includes an approximately 500-square-foot dining area. Renovations included installing a bathroom, new drywall, and new flooring in addition to Lapierre’s art, which is featured on the walls, floors, doors and the building’s exterior.

Both Lapierre and Mancos researched the former Air Force Base’s history, and consulted with Matt Cole of the Loring Military Heritage Center, who gave the two a private tour of the Loring Air Museum as well as a detailed history of the base’s significance throughout the years.

“It was a fun process, but it was also emotional to hear about some of the things that happened and to see the history of that place,” Lapierre said.

“I lived in Caribou my whole life and I remember the base closing, but I didn’t realize that it was essentially a town in itself,” Mancos said. “They had their own stores, school and commissary. It was an entire town within a town. Once you sit back and reflect on all that, it’s pretty impressive, especially for our neck of the woods.”

The restaurant now has 20 employees, with six working full time. Many of the part-time employees come from surrounding towns, with three from Caribou, two from Washburn and one from Presque Isle.

Mancos said one advantage to running a year-round restaurant is that it’s easier to attract employees as it provides more job security.

Much like the restaurant’s aesthetic, even the food pays homage to Limestone and Maine. Signature subs are given names reminiscent of Loring’s glory days, like “The Bomber,” a sub with smoked turkey breast, virginia honey ham and monterey jack cheese; and “The Sky’s the Limit,” a sub with beef brisket, cheddar, mayonnaise, crunchy onions, a pickle and Sweet Baby Ray’s BBQ Sauce.

Mancos said that while he had never in his life considered making pizza before, the pizza oven in the building inspired him to offer some signature pizzas as well. Arguably the most noteworthy pizza on offer is “The Maine Attraction,” topped with red hot dogs, Humpty Dumpty All-Dressed chips, mozzarella cheese and marinara sauce.

“It sounds super weird, but it is so good,” Lapierre said. 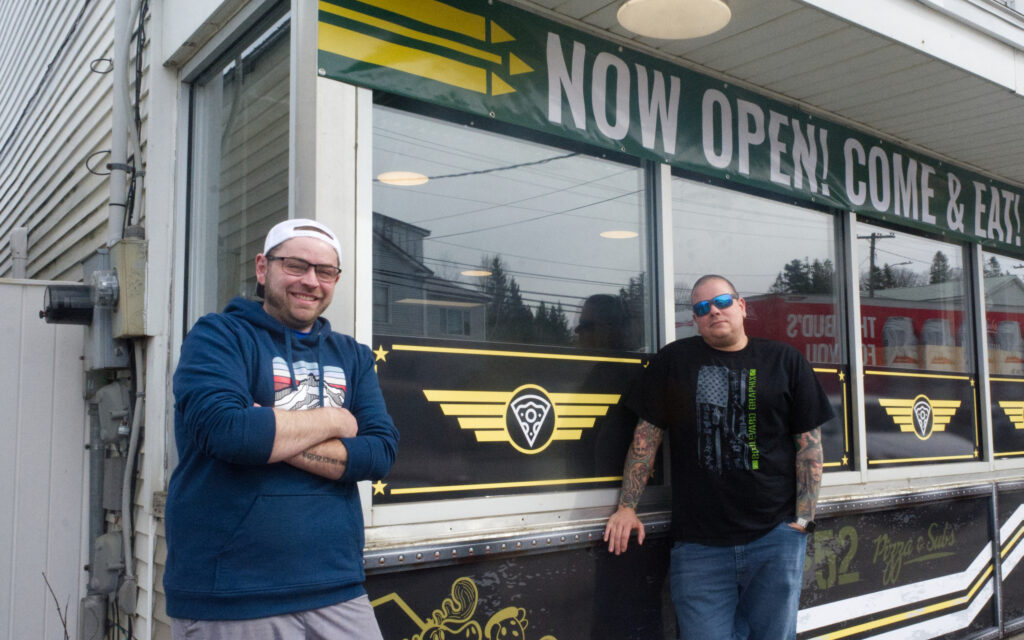 Mancos said the idea for the Maine Attraction pizza came about spontaneously.

He said that his aim for the restaurant is to have something for everyone, adding that he’s considering incorporating some gluten-free options in the future.

Lapierre commended Mancos’ and his employees’ culinary ability, saying the offerings at the restaurant are unlike any eateries in the area.

“It feels like a higher-end sandwich when you’re eating it. Everything Dustin uses, down to the paper he wraps them in, is unique. It’s all about the experience, not only with what we have on the walls, but the way the food tastes and how it feels in your hand. It’s completely different from anything you’ll find in this area,” Lapierre said.