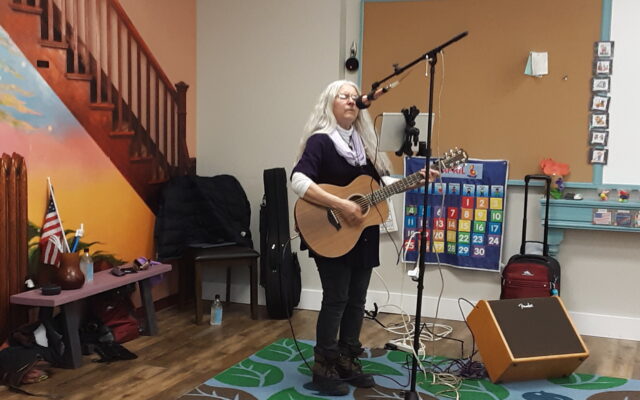 Melissa Lizotte • April 3, 2021
The work of Janice Santos is being showcased this month at Wintergreen. She held an open house at the facility's First Friday Artwalk event April 2.

PRESQUE ISLE, Maine — Whether she is on her way to work or traveling across the country, Janice Santos of Perham always has her camera on hand, ready to snap photos of the next image or scene that captures her attention.

Though Santos grew up in East Freetown, Massachusetts, a village near Cape Cod, she has lived in Aroostook County since 2004 and recently has rekindled her love for photography. On April 2, Santos showcased 45 photographs at Wintergreen’s First Friday Art Walk opening.

Most of the photos portray animals, plants and scenery or abandoned buildings caught within the throes of nature. One photograph features a doe that wandered into Santos’ backyard one day, while another catches the moment a whale’s tale breaks the water’s surface during a Massachusetts whale watching trip.

Another of Santos’ favorite photographs depicts an abandoned home on Route 161 between Woodland and New Sweden. Her love of music is evident in a photograph capturing the “corner in Winslow, Arizona” that The Eagles sing about in “Take It Easy.” 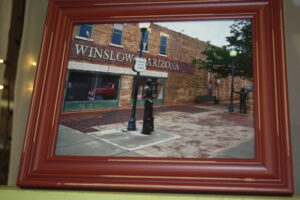 A trip to “a corner in Winslow, Arizona,” made famous by The Eagles song “Take It Easy” led to Janice Santos taking this photograph. (Melissa Lizotte|The Star-Herald)

Santos said that Aroostook’s open spaces and scenes of nature provide plenty of opportunities to portray her favorite photographic subjects.

“If I was in the city, I’d have to go someplace quieter with a lot more space if I wanted to take pictures,” Santos said. “Most photos I take when I’m on my way somewhere or have a day to myself.”

These days Santos works at Defense Finance Accounting Services in Limestone and often takes photographs near the home she built in Perham. But her days as a visual artist span back to the 1980s when she apprenticed at the studio of John Baptista, a local photographer in Massachusetts.

Santos’s apprenticeship led to an unexpected detour into the Army National Guard as a photojournalist for the Guard’s newsletter. 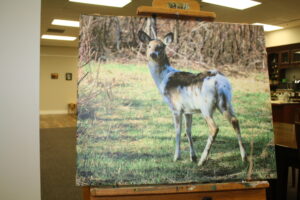 This photograph from Janice Santos of Perham depicts a doe standing in her backyard. Nature and the outdoors are two favorite subjects of Santos, who has lived in Aroostook since 2004. (Melissa Lizotte|The Star-Herald)

“I was working at a factory for minimum wage and apprenticing at the studio,” Santos said. “One day a National Guard recruiter walked into the studio and said, ‘I could make you a photojournalist.'”

In addition to her time with the Guard, Santos has worked as an office manager, customer service representative and CNA. But photography and music have become her most enjoyable artistic pursuits. Prior to the pandemic she regularly performed solo and in the local duo Purple Ruger.

At Wintergreen, Santos performed some of her favorite folk rock, blues and pop songs of the 1960s and ‘70s, including songs from Joni Mitchell, The Beatles, Bonnie Riatt, Van Morrison and Leonard Cohen. She noted that Wintergreen has become her favorite place to perform.

“It’s a very cozy, friendly atmosphere. The people who come here love art and those are people I love hanging out with,” Santos said.

More than a dozen people came to Wintergreen throughout the evening to hear Santos perform and marvel at her photography. Shannon Espling of Woodland, a friend and former co-worker of Santos, said that the Wintergreen show marked the first time she saw Santos’ work. 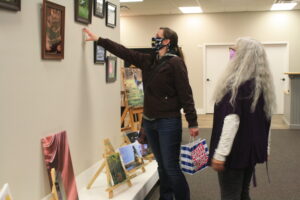 “I’m very impressed. She has a gift for seeing things that people might not notice right away,” Espling said. “You can see she has an outdoors heart.”

Santos’ photography will be on display at Wintergreen until the next First Friday exhibit on May 7.