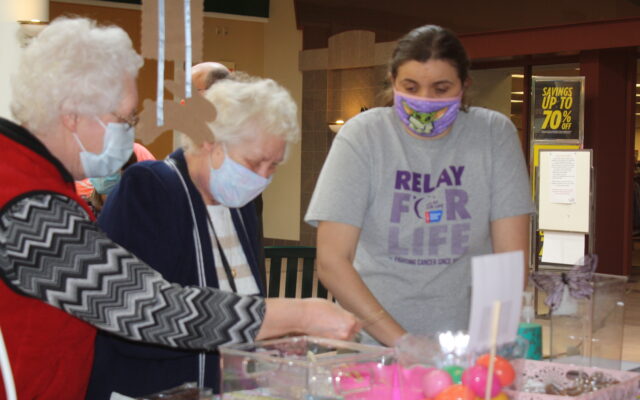 Though the festival was slated to last from 11 a.m. to 3 p.m., most of the seven Relay teams and community vendors found themselves sold out and packing up within the first hour and a half.

One of those people, Angie Wright of Presque Isle, attended to customers almost nonstop until selling all of her chocolate cookies, hot chocolate bombs, cupcakes and other treats. Wright was participating in the chocolate festival for the first time in honor of her mother, Margaret Wright, who died from cancer in 2019.

“Everybody’s life is touched by cancer, so it’s nice to do what we can to help,” Wright said, on the importance of Relay for Life fundraising.

The chocolate festival has consistently been one of Relay’s most popular events, typically raising thousands of dollars for the American Cancer Society. Last year’s event was canceled due to COVID-19, but the April 3 festival marked a major comeback, noted event organizer Heidi Estabrook.

“People were lined up even before we opened,” said Estabrook, who sold chocolate cakes and pies, along with several colleagues from MMG Insurance and Relay members. “Folks are excited to get back out into the community, and a lot are buying treats for Easter.” 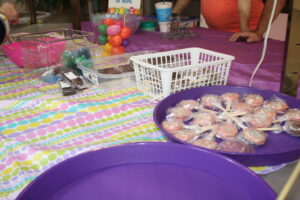 Homemade chocolate fudge and lollipops were among the treats sold at the Pictures of Hope booth during Relay for Life’s annual Chocolate Festival. (Melissa Lizotte | The Star Herald)

After a year of most community events occurring virtually or not at all, many people used the festival as a chance to socialize with friends and have fun while supporting a good cause. Sisters Vera Langley and Verna Espling, both of Caribou, bonded while buying chocolate snacks from the various vendors.

“I’ve been buying Easter gifts for my grandkids,” Langley said.

For Espling the festival reminded her of less worrisome days prior to the pandemic, when public events were more common.

“This is the first event we’ve been to [since COVID] and it has really lifted our spirits,” Espling said. “Just mingling with people has been really nice.”
A sense of community could be felt among fellow Relay members, many of whom share the experience of having lost loved ones to cancer. Pictures of Hope, a team of friends and fellow photographers, hosted one of the most popular booths near JCPenney’s, with the line stretching to more than a dozen people. Representing Pictures of Hope were Louise and Gary Bouchard and their daughter Autumn.

The Bouchards have taken part in the chocolate festival since its first year and, like many other teams, are motivated to help Relay due to personal experiences.

“My husband had cancer last year and both of us lost our fathers to cancer,” Louise Bouchard said. “We come here because we enjoy meeting people and making chocolate together as a family.”