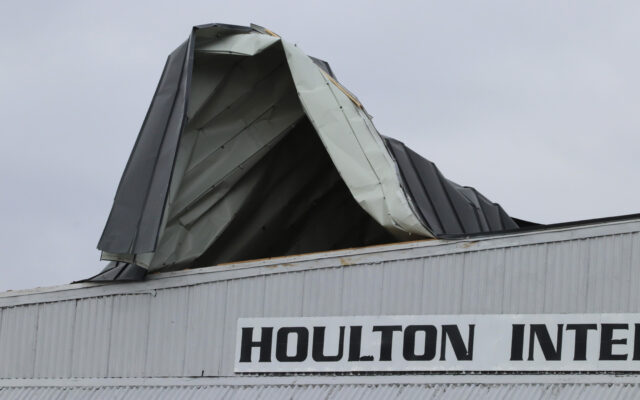 Joseph Cyr • April 5, 2021
Heavy winds in the Houlton area have left part of the roof at a Houlton International Airport hangar exposed, an issue the town hopes to fix as quickly as it can.

HOULTON, Maine — Heavy winds in the Houlton area have left part of the roof at a Houlton International Airport hangar exposed, an issue the town hopes to fix as quickly as it can.

The damage first occurred on Friday, March 26, according to Houlton Public Works director Chris Stewart, who said it wasn’t the first time the hangar roof was damaged in this way. Another part of the roof had this same type of damage several years ago and had been replaced, with the current damage occurring on the remaining old part.

“We’ve had issues with that part of the hangar,” Stewart said. “It was all the old metal on it that peeled up.”

Although Houlton has had more adverse weather since the roof peeling off, such as snow occurring on Easter Sunday, Stewart said that the short timeframe in which it will be fixed means weather conditions will have a negligible effect on the hangar.

“If we get rain, it’ll leak through because it’s just wood and old tar that’s up there,” he said. “But it shouldn’t cause any damage to the building.”

Stewart said that he expects to have the roof repaired by sometime next week. The cost of repairs is currently unknown, as the town is still waiting to hear back from contractors for an estimate.

Houlton Town Manager Marian Anderson said they aimed to repair the hangar “as soon as possible.”

“We’ve had the contractors out there, and they came right out the day of the incident,” she said. “And they have been checking it every day since we’ve filed our claim with the town’s insurance. So we hope to move forward quickly to get this repaired.”