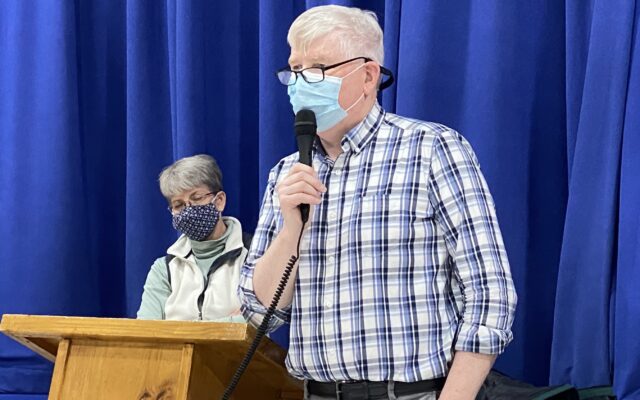 Alexander MacDougall • April 6, 2021
The town of Hodgdon elected three members to the SAD 70 school board, after a contentious election in which a recount had to be held for one position due to the small margin of victory.

HODGDON, Maine — The town of Hodgdon elected three members to the SAD 70 school board, after a contentious election in which a recount had to be held for one position due to the small margin of victory.

About 30 residents participated in the annual town meeting, which lasted around one hour.

David Harris, Edward McGillicuddy, and Ronald Silliboy Jr. were all reelected to the school board with 79, 102, and 107 votes respectively. Harris beat out the next-closest candidate, Loreen Wiley, by only two votes, which resulted in a recount. Following the recount, the result remained unchanged.

In addition to the school board election, the town also held elections for the board of selectmen , with John Gaddis and Clayton Quint III both getting reelected to the board.

The town also held a referendum this year on whether it should allow Sunday sales of liquor and wine. The town has historically not allowed the sale of alcohol on Sundays. That will change following the vote, as residents approved Sunday sales by a slim vote of 105 to 91.

For Hodgdon’s annual town meeting, most of the discussion centered around the approval of the new ambulance budget, in keeping with other town meetings that have occurred this year in southern Aroostook. Hodgdon’s ambulance contract with Houlton has had a dramatic increase in rates charged for this year, from $21,000 to to over $95,000. Hodgdon has been in discussion with 13 other southern Aroostook towns regarding possibly forming its own ambulance service as a result of the rate increase.

“We can’t go any cheaper,” said Hodgdon town manager Jim Griffin. “But I’m pretty sure we can have some control over the future.”

Griffin said that another special town meeting would be called at a later date to determine whether the town should form its own ambulance service. He also said he would ensure the fund only pays for Hodgdon’s contribution to a future ambulance, and not for other towns.

“Hodgdon won’t be paying because the other towns didn’t pay for it,” he said. “They’re all going to understand come Jan. 1, you’re going to have to pay this bill.”

The total amount for the 2021 budget for Hodgdon was just over $764,000, compared to around $694,000 for 2021. Most of the increase came from the increased ambulance contract, as well as the ambulance reserve account.