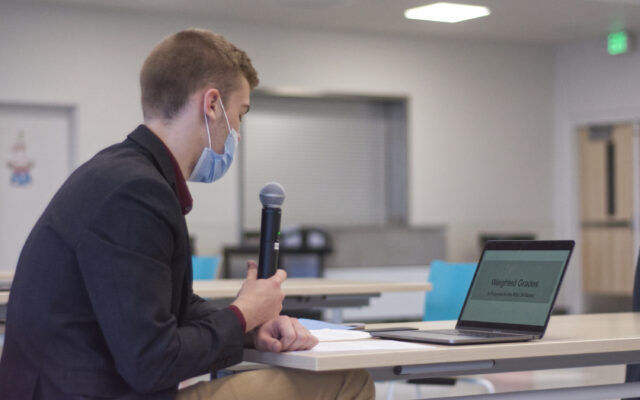 Chris Bouchard • April 8, 2021
Caribou High School students presented their case for weighted grades during an April 7 RSU 39 (Caribou and Stockholm) school board meeting, prompting the board to vote to allow high school administrators to develop such a plan.

CARIBOU, Maine — Caribou High School students presented their case for weighted grades during an April 7 RSU 39 (Caribou and Stockholm) school board meeting, prompting the board to vote to allow high school administrators to develop such a plan.

The vote did not formally approve the addition of weighted grades, but would allow school officials to present a specific plan for implementation, which would then be brought back to the board for approval.

Weighted grades take course difficulty into account, with advanced classes having a higher weight when factoring a student’s GPA.

Students Malachai Willey, Chloe Sleeper and Jadynn Blackstone-Eye presented their findings to the board, which included citations of academic research, surveys of high school students and staff, and a couple examples of how weighted grades could be implemented for advanced courses.

Willey said a weighted grade system for honors and AP classes would not only promote equity throughout the school, but also allow the district to take a step forward in modern education.

Sleeper shared a response from a student who was opposed to weighted grades. They argued that every scholarship and university they’ve applied for has requested an unweighted GPA, adding that this is the standard for higher level education.

“We should not abandon a standard and well working practice for one that only serves to benefit the already privileged highest echelon of students,” the student wrote in the survey. “We lose equity and equality with weighted grades, all so the toppers of the class can have a GPA that is a few points higher.”

Sleeper said that while this student presented some valid concerns, weighted grades would create a more equitable class ranking system.

“We believe AP classes are more accelerated than standard courses in terms of pace, required analytical skills and volume of material that must be absorbed,” Sleeper said, adding that students would still have access to their unweighted GPA while applying to colleges while the weighted grades would result in a class ranking that is more accurate to their skillset.

Willey then shared a response from a staff member who was opposed to the change, and argued that it sends the message that certain educational pathways are more valuable than others.

“It creates a system where teachers turn against each other when they feel devalued,” the staff member wrote. “Is art less valuable? Is tech less valuable? Is alternative ed less valuable? Because GPA has only ever been important when determining honor parts and therefore scholarship dollars, so GPA will always equate to money and weighted grades will stack the deck in favor of the academic elitists (who don’t tend to need the money as much as the families who you are stacking the deck against).”

Willey said that while the staff member made an excellent point, enrollment in tech classes has expanded greatly over the years while advanced classes are seeing declining enrollment.

“My AP Physics and Calculus classes only have seven students each, with six of them being enrolled in both classes,” he said. “Another example is that last year the AP Lit class had a mere two students enrolled.”

Ultimately, he said implementing a weighted grade system could boost enrollment in advanced classes by offering an incentive for students to succeed. He added that it is highly unlikely that teachers would turn against each other or discourage students from challenging themselves because of their personal feelings about the system.

Sleeper then cited a study published on MIT Press Direct’s website titled “Do Grade Weights Promote More Advanced Course-Taking?” which demonstrated that the introduction of weighted grades in schools has increased the probability of students taking an AP course by 3 to 12 percent and the number of AP courses taken increasing by 0.13 to 0.95 standard deviations.

“Such an increase in AP participation would be beneficial to the students at Caribou High School,” she said. “With exposure to higher caliber classes, students would be more prepared for college level classes, which is always a positive thing.”

RSU 39 Board of Education Chair Tanya Sleeper commended the students on their presentation, their initiative to advocate for change and their citation of facts and data to support their proposal.

Caribou High School Principal Eric McGough said the students did an “unbelievable job” of putting together the presentation, commending not only the students present at the meeting, but all other students involved with working behind the scenes to assist in putting the information together.

He said the next step would be to further explore the idea by involving community members and parents and determining if there is sufficient support, then digging into a specific model to adopt.

“We are incredibly supportive of the students, and of them taking ownership of their programming,” he said.

Looking ahead, students and administrators at Caribou High School will develop a specific plan for implementing weighted grades and present it to the board for approval at a future meeting.