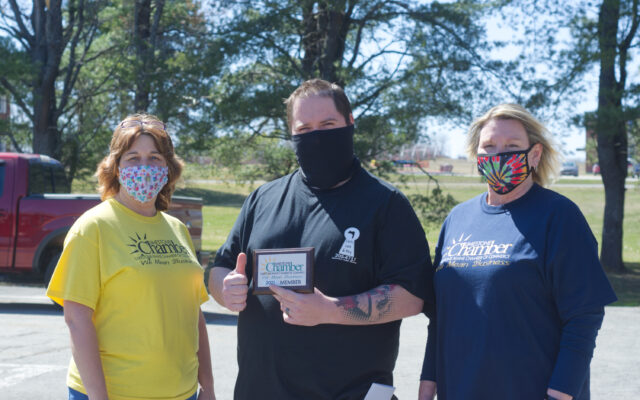 Chris Bouchard • April 16, 2021
Main Street Outlet and County Lock & Key are among two of four new businesses in Limestone this year, and were both formally recognized by the Limestone Development Foundation/Chamber on April 15.

LIMESTONE, Maine — Main Street Outlet and County Lock & Key are among two of four new businesses in Limestone this year, and were both formally recognized by the Limestone Development Foundation/Chamber on April 15.

The store is owned by Pat Cyr and her husband Mike Cyr, who also own Mike’s Family Market in Limestone, and First Choice Market & Deli and MIke’s Quik Stop & Deli in Caribou. 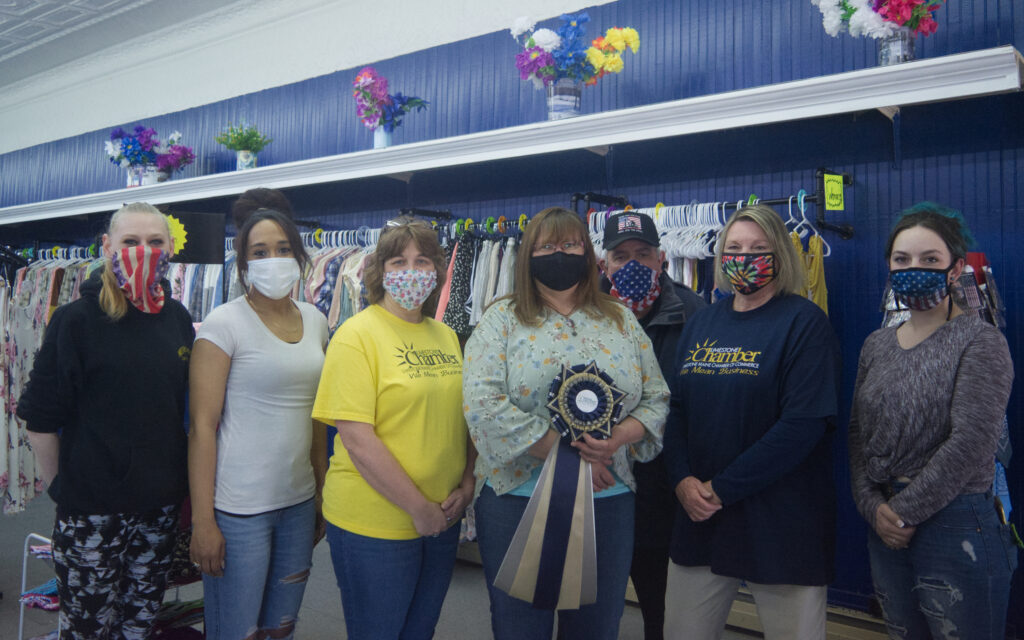 Cyr said she opened Main Street Outlet on March 16, and that they were inspired to purchase the building when it became available as it had a large amount of open space.

“We were trying to think of what we could do with it, and we felt that Limestone as well as Aroostook County doesn’t have a lot of options for clothing, so we thought maybe we could put some clothes into a store, but then it just grew into a department store,” she said.

Cyr said one benefit of the business is that it offers certain products, household items, gifts or supplies that aren’t available in town, giving residents without access to regular transportation an opportunity to shop locally.

“I know people won’t be doing all of their shopping here,” she said. “But it’s good if you need a birthday present, shower present or you need a last-minute shirt for the weekend.”

So far she said everyone who has come into the store has given great feedback, and that they will often try to stock up on items suggested by customers.

“They’ve been really surprised at what we do have. Everybody who comes in buys something,” Cyr said.

Cyr is planning a hot dog barbecue in early May to celebrate the store’s opening, and while she’s hoping to hold the event on the first Saturday of the month, it may change pending the weather.

“We’re going to have ice cream novelties; we have an ice cream freezer we haven’t brought over yet. We’re just going to keep filling the store up,” she said. “We keep getting more and more stuff all the time as people tell us what they’re looking for.”

County Lock & Key, owned by Steven Gaudette, has been open for business since January. Gaudette specializes in a myriad of lock-related services, including automobiles, boats, planes, RVs, buses, commercial locks and house locks.

Gaudette has been a locksmith for about a decade, and said he was inspired when an ex-girlfriend locked her keys in the car, a company came out to help, and then he ended up locking his keys back in the car on the same day.

“I broke into it myself and applied for a job at that company,” he said. “Then I got the job and it’s been downhill ever since.”

But when COVID-19 hit, the business he was working for in Saco shut down. So he decided to move to Aroostook County, where his wife grew up, and start his own business.

“We moved up and we just liked Limestone,” he said. “It’s not in the middle of everything and it’s a little bit cheaper to live out here, and it’s quiet. That’s the big thing. We got so sick of living on a main highway right on Route 1 in Saco, especially during the summer.”

Now Gaudette is able to operate his business from home.

And while he said there have been some growing pains starting out, he’s working to spread the word and eventually expand to the point where he may have to hire someone to help out.

“It’s been steady-ish, there are some days where it’s busy and I don’t have time for everything, and other days there’s nothing to do. It’s just growing pains, and I’m sure with time it’ll be busy every day,” he said.

Michelle Albert, president of the Limestone Development Foundation/Chamber, said the addition of these two businesses, along with B-52 Pizza & Subs and NorStar Appliance, this year, is undoubtedly positive news for the town.

“Especially now, during the whole situation with COVID, in Limestone four entrepreneurs decided to say ‘we’re going to give this a try’ and they were willing to take that chance and open something up and move forward, and I think this is wonderful for Limestone. I’m thankful as a citizen that someone was willing to take a chance and give it a try, and hopefully the community will support this,” she said.

“Our Main Street is starting to pick up,” Vice President Jo-Ellen Kelley said. “We still have Boulevard Graphix, Mike’s Family Market, a beauty salon. It’s beautiful to have all of this on Main Street.”

Members of the Houlton Band of Maliseets will head to the ballot box in order to determine who will be elected as their new tribal chief.
Pets END_OF_DOCUMENT_TOKEN_TO_BE_REPLACED