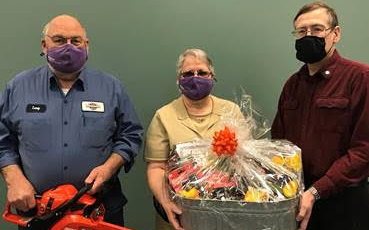 Presque Isle Rotary’s Give Back beats goals to benefit community

Contributed • April 20, 2021
The Presque Isle Rotary Club has reported that its Great Big Give Back was a great big success, raising more than $25,000 to benefit four local projects.

PRESQUE ISLE, Maine — The Presque Isle Rotary Club has reported that its Great Big Give Back was a great big success, raising more than $25,000 to benefit four local projects.

“We are beyond excited and so incredibly grateful to everyone who whole-heartedly embraced this effort to give back to our community. Because of all the support we received, not only was our event a smashing success, it’s also created this wave of giving that will continue to ripple out into our community for some time to come,” said Rachel Rice, who along with fellow Presque Isle Rotarian Chantal Pelletier co-chaired the event.

Initiated last fall, the project was postponed to extend its timeline after the overwhelmingly positive response and outpouring of support by area businesses and organizations.  The positive response from the local business community extended to the County community at large as the various components of the project went live starting in late January through March 17.

Rotarians had hoped to sell 2,000 raffle tickets for $10 each for five Great Big Gift Baskets, filled with both purchased and donated gift certificates and merchandise, each valued at almost $2,000.  Ticket sales and fundraising beat their goals by more than 25 percent, with 2,584 tickets sold and $25,840 raised.

Basket winners were: Scott Violette, Nancy Fletcher, Dave and Carla Cambridge, Curt Paterson and Jennifer Caron.  Each basket included a mix of gift cards to local shops and restaurants, gift certificates for local services and recreational opportunities, electronics, fuel oil, gas cards, and more.  Also included in each were signature items like an iPad, chainsaw, or a gaming chair.

Along with the raffle, PI Rotarians set aside 14 “big ticket” items — with a total value of more than $6,500 — to bring a piece of the club’s annual Rotary Auction into this year’s project. Items up for bid ranged from $3,000 toward a heat pump and hotel accommodations to college tuition certificates and tools.

By the end of the St. Patrick’s Day Facebook Live event, which served as the fundraiser finale, the auction had raised $6,000, or 91 percent of the value of the items up for bid.  The total raised included a very generous donation by community member Karen St. Peter, who pledged to fund the balance of a challenge issued early on in the broadcast by the event co-chairs indicating they would take pies to the face if the auction proceeds met or exceeded the $6,000 mark.

“We anticipated the pandemic to create major challenges for us early on,” Pelleier said. “The one thing that we never once doubted was the incredible generous community that supports us year after year, and that they would ensure that we would not only meet but exceed our goal.”

The community continued to step up in so many ways and we can’t thank them enough,” said Pelletier. “The phenomenal results of our collective fundraising efforts as a club will mean more support for the four local initiatives we are funding with proceeds from the Great Big Give Back.”

Donations of about $7,000 each will now be directed to the Presque Isle Rotary Club Scholarship Fund, United Way of Aroostook’s COVID-19 Response Fund, and the 2021 Crown of Maine Balloon Festival and Northern Maine Fair, two major Presque Isle-based regional events that canceled their official 2020 activities because of the pandemic.

In addition to fundraising, Rotarians asked community members to make “shop local” pledges and commit hours of pledged community service to local organizations through 2021.  As the Facebook Live finale event came to a close, a total of 752 pledges were made and 4,597 hours of community service were committed by local citizens – more than four times the initial goal of 1,000 hours.

“The success of the Great Big Give Back is truly the result of a community effort,” said Rice. “It is to the credit of everyone who sold tickets, bought tickets, made donations and made pledges.  It would not have been possible without our amazing local businesses and organizations who have made our past annual auctions, and now this event, successful.”

Rice and Pelletier acknowledged the efforts of key businesses and media partners who were instrumental in the getting the project off the ground.

Members of the Houlton Band of Maliseets will head to the ballot box in order to determine who will be elected as their new tribal chief.
Pets END_OF_DOCUMENT_TOKEN_TO_BE_REPLACED