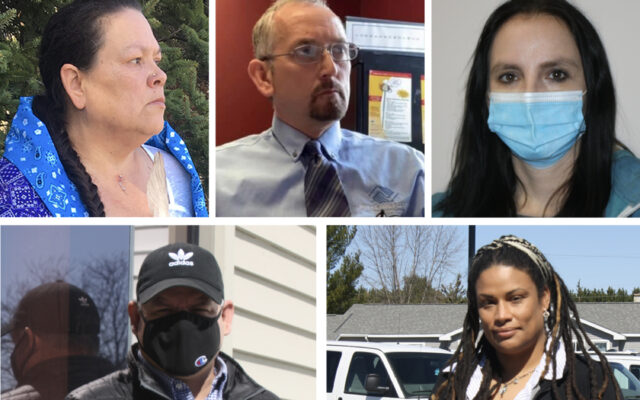 Melissa Lizotte • April 30, 2021
Five community members are in the running for chief of the Aroostook Band of Micmacs, all with goals to create greater economic growth, expand health and wellness services for elders and youth and promote stronger community involvement and ties with tribal leaders.

PRESQUE ISLE, Maine — Five community members are in the running for chief of the Aroostook Band of Micmacs, all with goals to create greater economic growth, expand health and wellness services for elders and youth and promote stronger community involvement and ties with tribal leaders.

Leach is one of several candidates, including Kiandoli and Getchell, who have never run for chief in prior years, but felt inspired to do so because of concerns that community members have discussed. Leach, who works as a medical assistant for the Micmac Health Clinic, said that she has seen how the lack of full medical services has disadvantaged many elders who find themselves in need of more advanced care.

“I believe we need to have an assisted living facility [for the tribal community] where our elders are cared for 24/7, where they can socialize together and be safe,” Leach said. “Transportation is an issue for many of them. Family members often have to travel downstate if an elder needs to be placed at another facility.”

Leach also pointed to an ongoing issue of drug usage. If she becomes chief, she would like to see if the tribe could establish a local treatment or detox facility to benefit both their community and people in the surrounding region.

But in order for those ideas to happen, Leach noted, community members need to feel as though their administration hears their concerns.

“I decided to run because I feel that our community is speaking but no one is hearing them,” Leach said. “I’ve spoken to a lot of people. They don’t want to come [to tribal council meetings] because nothing is ever done to address these issues. I don’t want to make promises I can’t keep.”

Kiandoli, who served as vice chief from 2013 to 2017, also expressed the concern that past administrations have not done enough community outreach. Although the tribe has made strides in economic development, youth programming and health care since its federal recognition in 1991, she said that many families still struggle to make ends meet and have dealt with the effects of substance use disorder.

Those struggles, she noted, have led her to think that greater investment in community services is needed. For instance, under current state guidelines for MaineCare many single people and working parents barely meet income qualifications. As chief, she would want to look at potential negotiations with the state to cover more tribal members under MaineCare.

In running for chief, Kiandoli has gained inspiration from her mother, the late Peggy Caparotta, and late grandmother, Mary Lou Caparotta, who were active in helping the Micmacs become a federally recognized tribe in 1991.

Even in those days before a tribal administration, she said, families and community members knew how to come together to solve problems and work through differences.

“Because of past experiences [with various tribal administrations] our community has been restless but not expressing their voices,” said Kiandoli, who currently serves as the public relations officer for the Presque Isle Boys and Girls Club. “If I became chief, I would encourage the community to be more active in government affairs.”

Current tribal counselor Fred Getchell not only wants to address substance use and economic development within the Micamc community, but also look into partnerships that could benefit the tribe and all of Aroostook County.

Getchell was one of many people involved in creating a corporate charter for the tribe, which was signed in 2017, that would allow them to enter into projects with the federal government and create businesses and job opportunities on Micmac land. If elected he wants to not only help establish a board of directors for that charter but also reach out to local municipalities to potentially collaborate on economic development.

“Our members don’t just live in Presque Isle. They live all across Aroostook, in Littleton, Houlton, Caribou, New Sweden,” said Getchell, who owns Getchell Property Maintenance in Presque Isle. “If we could work with municipalities, we could put everybody to work.”

Though Getchell chose not to run for chief in previous elections, this year he talked with more community members than ever before who asked if he would reconsider. If elected, he would like to tackle economic and wellness issues “head on” and work toward economic independence for the tribe.

“We can’t be a grant tribe forever,” Getchell said, referring to state grants that help the tribe fund new and existing programs. “We need to move toward self-sufficiency.”

But self-sufficiency cannot happen, noted Peter-Paul, until the tribe obtains sovereignty. Like chiefs of Maine’s other three tribal communities, Peter-Paul has spent most of his terms involved in conversations with Maine lawmakers, which he said remain ongoing.

Currently the 1980 Maine Indian Land Claim Settlement Act treats tribes more like municipalities than sovereign nations. For the Micmacs, this means that building a new business on tribal land still involves adhering to local zoning laws and municipal processes. The Settlement Act also prevents the tribe from establishing its own court system and enforcing laws that are separate from those of municipalities and the state and federal governments.

Without sovereignty, Peter-Paul said, the Micmacs do not have access to federal programs under the Bureau of Indian Affairs, including the Indian Child Welfare Act that could be paired with a court system to preside over child custody cases. The tribe also cannot access funds from the Bureau that are allocated to tribes across the country or move forward with plans for their corporate charter.

“I want to continue fighting for sovereignty,” Peter-Paul said, on what his top priority would be if reelected. “That will give us the freedom to create our own businesses and do all the things we want to do for our people.”

He also expressed interest in building upon relationships with tribal members and ensuring that future actions are taken with their concerns in mind.

“I wish that the people [who have not expressed concerns] would come see me so we can try to address these issues,” Peter-Paul said. “With things like economic development, we need the community to be involved.”

With every election comes the opportunity for change in leadership, one that Hamel hopes inspires community members to consider her as a positive change.

As a longtime tribal administrative employer, Hamel has seen the tribe’s offices go from a small location on Main Street in Presque Isle to their current large administrative building on 7 Northern Road and surrounding health clinic and Boys and Girls Club. She remembers watching her mother, Roberta LaBobe, advocate for the Micmacs’ federal recognition.

But Hamel also thinks that quicker changes in many areas, including housing, substance use and mental health treatment and economic independence, are necessary for the tribe to move toward a healthier future.

“Even in the past 30 years [since the tribe’s recognition], I feel like we could’ve done so much more. I feel like sometimes we become comfortable with what we have and we don’t want to ask for more,” Hamel said. “I believe there’s more that we could fight for.”

The Aroostook Band of Micmacs hold elections every two years, with the positions of tribal chief and vice chief up for vote every four years in addition to three of the seven council seats. This year current vice chief Richard Silliboy is running against Sandra McDonald.

Voting will occur from 9 a.m. to 7 p.m. Tuesday, May 11, at the Council Chambers on 7 Northern Road in Presque Isle, the Caribou VFW at 9389 Van Buren Road and at the Houlton Recreation Center at 128 Main St.

Rep. Joseph Underwood, R-Presque Isle has been appointed to serve on the Legislature’s Agriculture, Conservation and Forestry Committee.
Pets END_OF_DOCUMENT_TOKEN_TO_BE_REPLACED