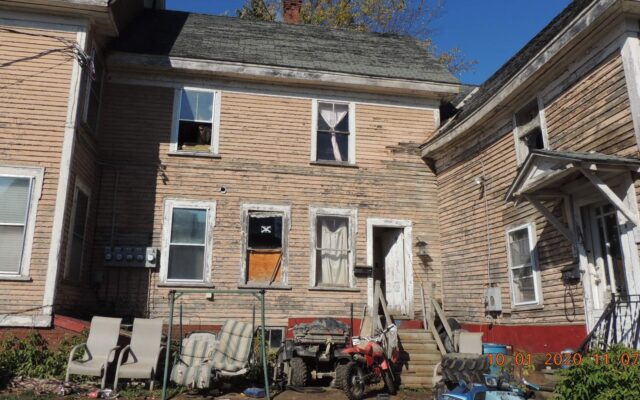 Kathleen Phalen Tomaselli • May 7, 2021
Even though people have been living in a condemned Presque Isle home on Elm Street without power or water since last year, city officials said they are limited in what they can do because of the state’s current ban on evictions.

PRESQUE ISLE, Maine — Even though people have been living in a condemned Presque Isle home on Elm Street without power or water since last year, city officials said they are limited in what they can do because of the state’s current ban on evictions.

During Wednesday night’s city council meeting, a woman who lives next to the Elm Street property shared her concerns about growing mountains of trash and the noxious sound of a generator buzzing round the clock at the house.

After distributing photos of the property and surrounding trash, Paige Huston played audio recordings of the generator as she hears it from her bedroom and when she steps out her back door, explaining that the noise keeps her awake and that even calls to police have failed to stop the incessant sounds.

“One evening in April, I called four times,” she said. “Actually on Monday of this week when I called … they asked if they were running their large generator or their small generator. Also unacceptable.”

An emotional Huston detailed all the steps she took before bringing the matter to city council, including contacting code enforcement, calling police about noise and making a trash complaint.

“This issue needs to be addressed and I do not feel it has been,” she said, adding she understands there are limitations caused by the pandemic, but the house has been condemned for 18 months.

“This is a city overlooking and neglecting something,” she said. “I am a reasonable human, but I am at the end of my rope so I would like some answers.”

Council expressed concerns about the property and asked code enforcement officials about city ordinances related to this issue. Councilman Michael Chasse asked if there are any regulations against living in a house without power, water and sewer, but City Code Enforcement Officer George Howe said there are none.

“The [36 Elm St.] property was condemned prior to COVID-19 and when those people moved in they knew it was condemned at the time,” Howe said. “Then COVID struck. There was really nothing I could do and the governor’s order was not to evict. I was kind of dead in the water.”

The current tenants previously owned the home until 2016. The property was condemned on Aug. 13, 2019 and was tax acquired as of Nov. 24, 2020.  The tenants entered into an agreement to pay back taxes.

Eviction notices would apply, except the governor’s order prevents the city from evicting when the tenant is paying the city what is owed, said Director of Economic and Community Development Galen Weibley, adding that the city owns the Elm Street property but the tenants are making payments for a buyback agreement for the deed.

Regarding the noise, Howe said there is no city noise ordinance.

City Manager Martin Puckett said when the city had a noise ordinance several years ago they ran into challenges with businesses and farms that started work early in the morning, but the issue could be revisited.

The people living at the property recently asked code enforcement for an application to build on the property, with intentions to tear down the existing house and build a tiny home behind it with that lumber and other materials, Howe said.

“I would say I feel like we should be able to do more. I get that your hands are tied but this doesn’t seem reasonable at all to live in a community and force your neighbors to live like this,” Chasse said.

On Thursday, the city developed a plan of action for the property, including having the garbage cleaned up by next week.

“We are preparing a notice for the June 2 council meeting to have a hearing for 36 Elm as a dangerous building with the objective of having tenants present their plan to the council regarding their intent and timeframe,” Weibley said. “The council may issue a 30-day order to demolish the structure if they are not satisfied with the proposed plan and timeline by the tenant.”

Also discussed at this week’s council meeting was a dangerous property at 14 Park St., slated for demolition after months of trying to negotiate with owner Fernand Martin.

Last September, the city gave Martin 30 days to abate substandard conditions in several downtown properties. But the more than 4,000-square-foot home at 14 Park St. remains a condemned property with severe health and safety issues, according to city code enforcement.

The city has been patient with Martin, City Manager Martin Puckett said. But because the property remains in its deteriorated condition, it will be demolished.

The council voted 6-to-0 in favor of proceeding with the demolition and awarding the contract to the lowest bidder, Trombley Construction. Councilman Craig Green abstained from voting due to a potential conflict of interest.

An agreement has been drafted and will be sent to the winning bidder, Weibley said.  The schedule for demolition will depend on the contractor’s schedule. The money used for demolition is from the city and a lien is placed on the property to recover costs at sale.

Members of the Houlton Band of Maliseets will head to the ballot box in order to determine who will be elected as their new tribal chief.
Pets END_OF_DOCUMENT_TOKEN_TO_BE_REPLACED