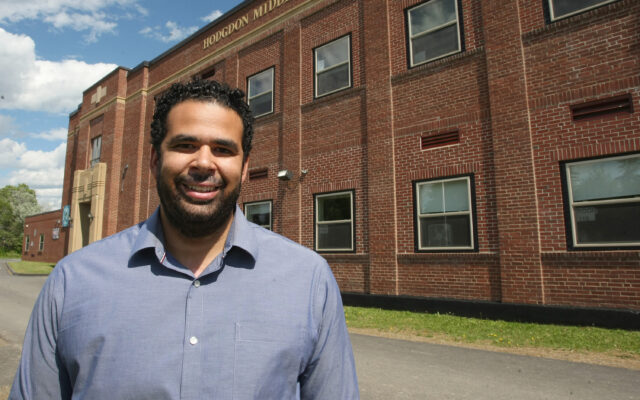 Putnam steps down from alma mater

Joseph Cyr • June 4, 2021
Hodgdon Middle-High School Assistant Principal Tyler Putnam is leaving his alma mater at the end of the school year to further his career.

HODGDON, Maine — Hodgdon Middle-High School Assistant Principal Tyler Putnam is leaving his alma mater at the end of the school year to further his career.

“I took a couple of weeks to think about it, because it was really hard for me to leave Hodgdon,” Putnam said. “I grew up here, went to school here and have made a lot of connections. But this was a challenge and opportunity that I did not see coming my way this early in my career.”

Putnam has been the assistant principal at Hodgdon Middle-High School for the past two years. He has spent 14 years in the field of education. Prior to Hodgdon, he was a teacher in Washburn and Acton school departments.

Working in the school district he attended as a youth was a surreal experience for Putnam. Some of the teachers he had had as a student are still with the district, which has provided Putnam an opportunity to repay them for guiding him through school.

“As a student, I was a whole different person than I am as an administrator,” he said. “I also was able to establish family connections with the children of people I went to school with, so that was really cool. It really was a seamless connection.”

A 2002 graduate of Hodgdon, Putnam was a standout athlete for the Hawks. He said he has enjoyed being able to support the athletic teams as an administrator, and could be found at most sporting events at the school.

Going from a high school of a little more than 200 students in Hodgdon to a system with 1,460 in Lewiston will be a major adjustment, he added. In Hodgdon, Putnam prided himself on knowing every student’s name and background.

Putnam said that becoming a high school principal has always been his professional goal and described it as his “dream job.”

“A principal still has connections with students on a daily basis,” he explained. “Superintendents are more administrative. I want to be more hands-on with the students.”

Members of the Houlton Band of Maliseets will head to the ballot box in order to determine who will be elected as their new tribal chief.
Pets END_OF_DOCUMENT_TOKEN_TO_BE_REPLACED
6 days ago