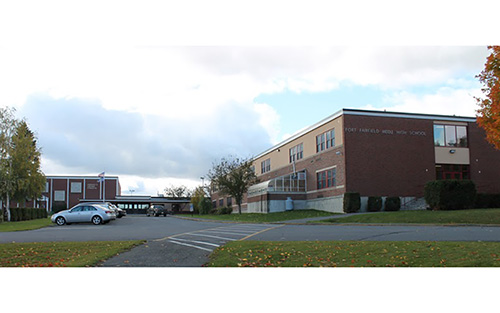 Contributed • June 5, 2021
The Fort Fairfield High School Athletic Hall of Fame has announced eight athletes will be inducted into its group.

FORT FAIRFIELD, Maine — The Fort Fairfield High School Athletic Hall of Fame has announced eight athletes will be inducted into its group.

Selected for this prestigious honor are a mix of former athletes and contributors to the school. The class of inductees is Dr. Courtney Churchill, Kerby Doughty, John Greenier, Brian Hollander, Shawn Ireland, Travis Noyes, Cathy Orser and Karla Tomlinson.

A special presentation will be made to the “Team of the Year,” a team from the past selected for the honor. This year’s team will be all the State Champion Ski Teams of the 70’s and 80’s. All team members will be invited and honored prior to the induction of this year’s new members.

The seventh class will be inducted Thursday, July 15, at Fort Fairfield High School. Tickets are now available for the banquet and induction ceremony, which begins at 5 p.m. with a social hour, followed by the meal at 6 p.m. with the induction of this year’s class of eight athletes. Only 125 tickets are available.

Honored guests will include previous inductees, along with this year’s five student-athlete recipients of the Athletic Boosters Clubs Scholarships. A video slideshow and introduction will highlight the evening, along with the presentation of Hall of Fame jackets and plaques to each inductee.

The 2021 FFHS Athletic Hall of Fame inductees and a short biography of some of their accomplishments:

Dr. Churchill, athlete, is a 2010 graduate, point guard and captain of the 2010 Girls State Basketball Championship team. An outstanding all-around athlete and winner of the Mahaney award, emblematic of the top athlete in her class. She was also awarded the Robert Nelson award in soccer. She was named to the Class D All-tourney basketball team, All-Eastern Maine Class D soccer team as well as All-Aroostook teams in softball, soccer and basketball. Dr. Churchill works for Spectrum Orthopedics in Portland.

Doughty, a contributor, is a 1975 graduate who was a three sport athlete winning the Nelson and Boulier awards for outstanding soccer and baseball player. Doughty was selected for his outstanding contributions and service to FFHS athletics and community work. He was the JV girls basketball coach, Tiger Cubs coach, has been involved in the Athletic Booster Club, and has cooked at numerous events from Thanksgiving Dinners at the VFW and the Cyr Family Christmas Dinners along with hunters breakfasts, Booster Club fundraisers and Fish and Game events. Doughty has also kept the clock and scorebook for basketball and soccer events for many years.

Greenier, an athlete, is a 1984 graduate and multisport athlete earning eight varsity letters. Greener helped lead the 1984 boys basketball team to the school’s first-ever Eastern Maine Championship. In the championship game he scored 10 points, grabbed 11 rebounds, dished out five assists and recorded five steals to help defeat Steve Clifford’s Woodland Dragons. He was voted 1st team All Tourney recording 32 points, 33 rebounds and 13 assists and 12 steals and was also selected All-State honorable mention. Greenier won the Nelson Award in soccer and was team captain and a tough nosed catcher for the baseball team batting over .300 and was stellar behind the plate with a great arm.

Hollander, an athlete, is a 1958 graduate of FFHS. Hollander was a standout in basketball and baseball having played both sports all four years. He was named All-Aroostook in 1958 scoring 22 to 24 points per game. In 1957 he batted .567 going 6 for 6 in his last game that season. In 1958 he led his team in hitting as well as being their top pitcher. Hollander went on to Brandeis University where he shattered the single game scoring record scoring 50 points against Merrimack. He was team captain in 1961-62 and was named All-American from small colleges. To this day, Hollander still ranks fifth in career rebounding and 14th in career scoring for Brandeis University. He received his Law Degree from New York University in 1965. He argued a landmark constitutional law case of Shapiro vs. Thompson before the U. S. Supreme Court.

Ireland, an athlete, is a 1981 graduate and outstanding athlete. Ireland earned nine varsity letters in baseball, basketball and soccer and also served as team captain in all three sports. He was the recipient of the Robert Nelson Award in soccer, the Boulier Award in baseball and also received the Mahaney Award for outstanding senior athlete. He helped lead his soccer team to four playoff appearances including a 1977 Easterm Maine Runner-up. His baseball and basketball teams made the playoffs in 1979-80. Ireland was also selected as president of the Varsity Cub for two years. He served four years in the U. S. Airforce and has been employed by UPS for over 35 years.

Noyes, an athlete, is a 2011 graduate and multisport athlete lettering in basketball, and soccer. He is a 1,000-point scorer and the all-time leading scorer for boys basketball with 1,096 points. He helped lead his 2010 basketball team to the Eastern Maine Class D Runner-up. He was selected to the McDonald’s Senior All Star team as well as All Aroostook teams his junior and senior years. On the soccer field, Noyes became the all-time leading goal scorer and was All-Aroostook his junior and senior years. Noyes was team captain for both basketball and soccer. He served four years in the Marine Corp and currently works for ADT in California.

Orser, an athlete, is a 1975 graduate of FFHS. Orser was a multi-sport standout earning 10 varsity letters in basketball, softball and field hockey. She played basketball and softball all four years and when field hockey was introduced her junior year, she competed in that earning her the team MVP Award. She was awarded the coveted Basil Mahaney Award as outstanding senior athlete and won many team awards for her outstanding play. Orser was on the forefront of girls sports and was one of those athletes who could play and excel at any sport.

Tomlinson, an athlete, is a 1977 graduate of FFHS. She led her ski teams to the State Championships in 1976 and 1977. She was a multi-sport athlete participating in alpine skiing, cross country skiing, field hockey and softball. Tomlinson won the Gold Medal for the Giant Slalom in 1975, was the 1976 State Skimeister, an incredible accomplishment, and won a gold medal for winning the 1977 State Ski competition.

This year’s sitdown meal will have a choice of Prime Rib or Baked Stuffed Haddock, along with twice baked potatoes, buttered peas, macaroni salad, dinner rolls and dessert. Ticket prices are $35 per person. Fort Fairfield student athletes will again be servers for the meal which adds a great touch of class to the event.

Those who would like to share in this historic moment in school history and help honor the eight inductees, you can purchase tickets by contacting Larry Gardner at 551-5001 or emailing him at lgardner@msad20.org.

Members of the Houlton Band of Maliseets will head to the ballot box in order to determine who will be elected as their new tribal chief.
Pets END_OF_DOCUMENT_TOKEN_TO_BE_REPLACED