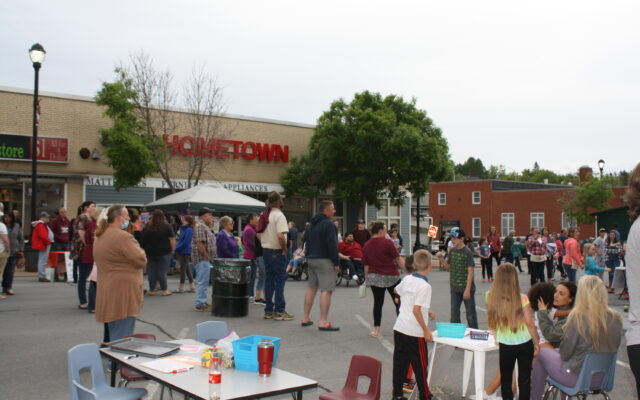 The relaunch of Thursdays on Sweden Street began at 6 p.m. with cloudy skies but warm air that urged people to finally get outside and socialize after more than a year of being stuck at home. More than 100 people, most of whom did not wear masks, enjoyed ice cream and fried treats from vendors as they chatted with friends and neighbors.

More than a dozen vendors sold everything from food and artwork to patriotic flags and banners. Students raising funds for Caribou High School’s Project Graduation urged people to step up for their chance to get soaked in their dunking booth. The attraction proved to be one of the most popular booths of the event. 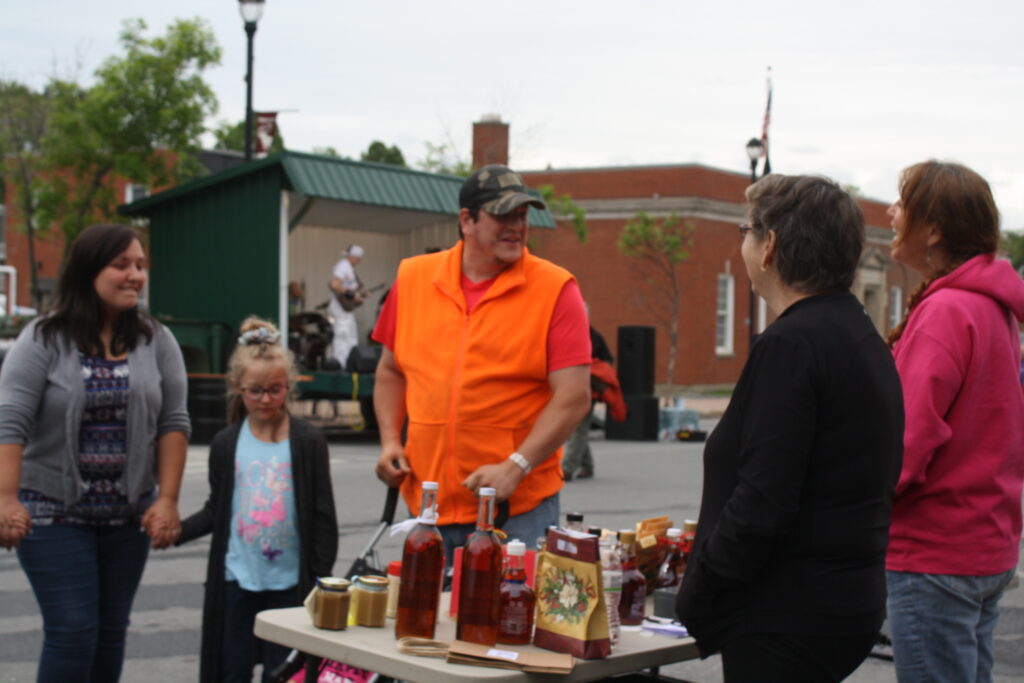 Jeanne Snyder (behind table, right) and Joan Connolly of the Perham-based Salmon Brook Valley chat with Brad and Ali Pictou and their daughter Katie, 8, during Thursdays on Sweden Street. (Melissa Lizotte | Aroostook Republican)

Nearby, Joan Connolly and her daughter Jeanne Snyder sold maple syrup, butter and candy from their Perham-based business Salmon Brook Valley. After deciding to cancel their Maine Maple Weekend festivities, they were excited to finally interact with community members.

“We really enjoy it. We have a lot of regular customers who stop by while they’re here,” Snyder said. “It’s good to be here without having to wear masks.”

Salmon Brook Valley was one of many vendors that Brad and Alli Pictou of Caribou visited with their three daughters. Brad Pictou said that the family tries to come to Thursdays on Sweden Street whenever they can, and were glad to hear it was back this year.

“It’s good to get out and about and see people,” he said. 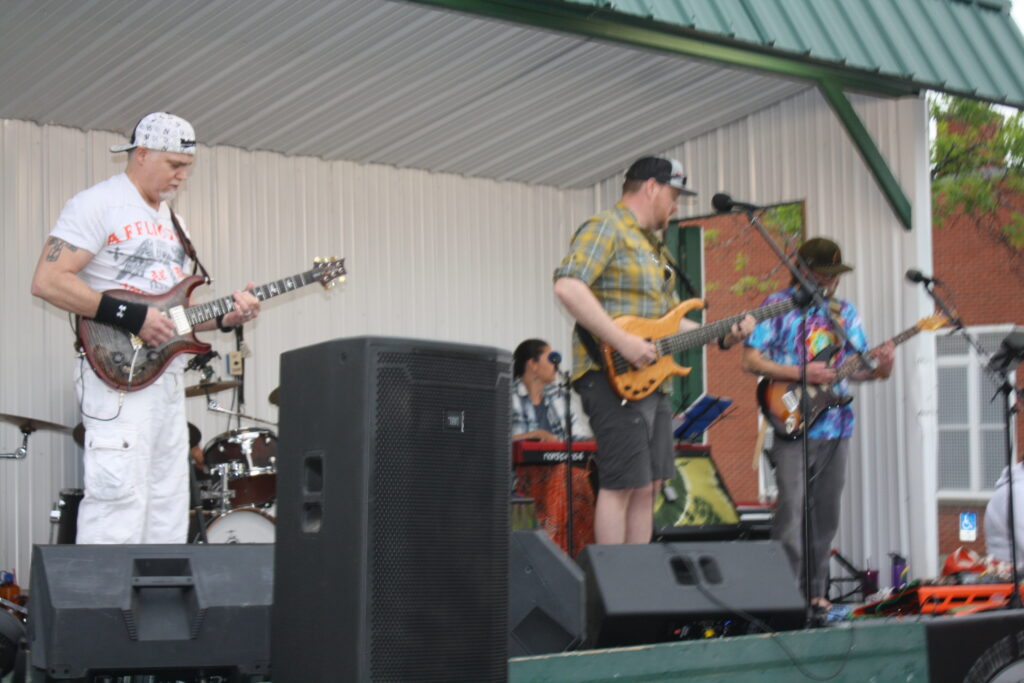 Though rain showers quickly started around 6:30 and sent many people ducking for cover under store awnings, many more stayed in the street to ride out the weather and hear music from Barefoot Brotherhood.

With Thursdays on Sweden Street coming back, Caribou events and marketing coordinator Christina Kane-Gibson detects a renewed sense of community forming in the city for the coming summer.

“Oh my gosh, we are so ready to be back on Sweden Street,” Kane-Gibson said. “[My office] was getting phone calls all afternoon from people asking if we were still going to be outside tonight. I think people have missed seeing each other.” 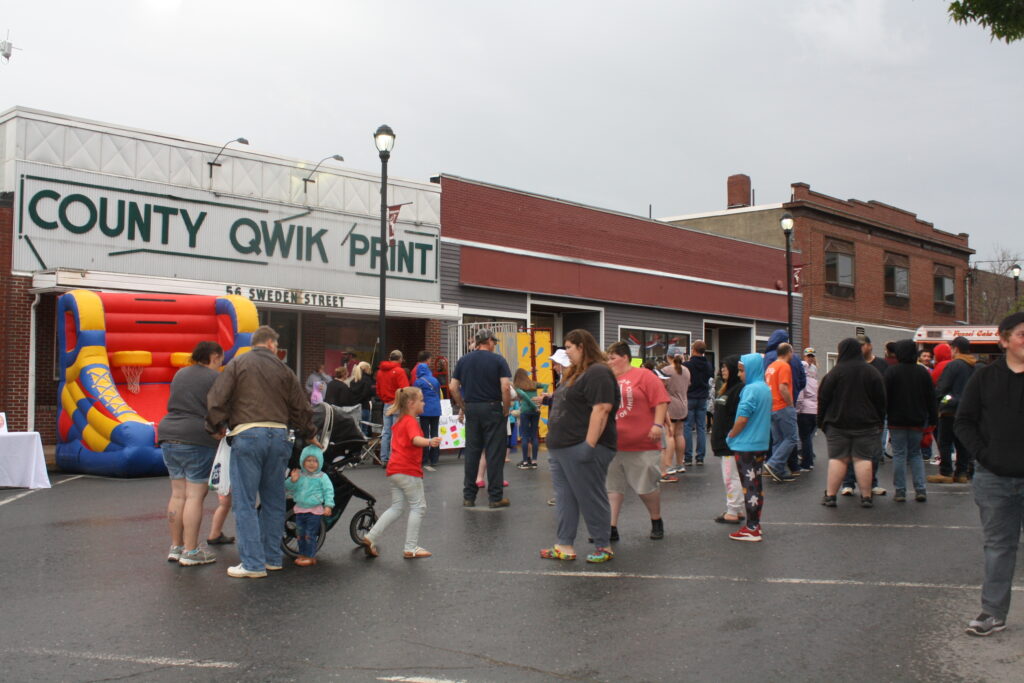 Even after the rain came, many folks stayed out and about during Thursdays on Sweden Street. (Melissa Lizotte | Aroostook Republican)

In the coming weeks, Caribou has at least four more Thursdays on Sweden Street evenings planned, all with a variety of live music and activities. Each night — June 17, July 1, 15 and 29 — will feature an outdoor cafe courtesy of a different restaurant. Sports Inn will provide food on June 17 and July 29, while Par & Grill will be there July 1 and 15.

Starting June 17, Cary Medical Center will be at the Sweden Street events to offer Moderna vaccines against COVID-19 for anyone unable to book an appointment during the day. The biweekly structure of Thursdays on Sweden fits perfectly with the recommended two-week time span between the first and second dose of Moderna, noted Kane-Gibson.

Kane-Gibson urged people to keep up with the City of Caribou Facebook page for regular updates on future Thursday line-ups and possible themes.

“This is going to lead to a lot of positive things for the city,” she said, about the return of Thursdays on Sweden.

Members of the Houlton Band of Maliseets will head to the ballot box in order to determine who will be elected as their new tribal chief.
Pets END_OF_DOCUMENT_TOKEN_TO_BE_REPLACED