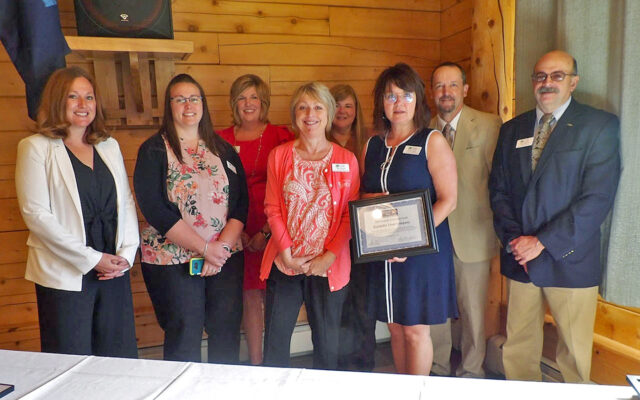 Contributed • July 14, 2021
The United Way of Aroostook hosted its annual meeting on July 7 with a breakfast and awards presentation at the Presque Isle Snowmobile Club.

PRESQUE ISLE, Maine — The United Way of Aroostook hosted its annual meeting on July 7 with a breakfast and awards presentation at the Presque Isle Snowmobile Club.

About 80 guests attended to celebrate making it through a difficult time and celebrate the work that has happened over the past two years to make lasting changes in Aroostook County. Last year’s annual meeting was canceled due to COVID-19.

The 18 members of the board of directors were announced for this coming year. United Way Executive Director Sarah Ennis said a number of new members were added over the past two years. Denise Plourde of NorState Federal Credit Union completed her term and was thanked for her outstanding service.

Board President Jon Gulliver spoke about how, in the midst of a worldwide pandemic, the United Way of Aroostook was able to maintain its focus to help the people of Aroostook County.

He thanked all the donors and corporate partners for how they have stepped up during this difficult time.

“Their generosity and caring have made a difference in thousands of people in Aroostook County this past year,” Ennis said.

Versant Power received the Campaign of the Year Award for the excellence in their campaign but also for their strong philanthropic culture and community partnership.  This organization was selected because of their organizational volunteer culture, including collaborative work with United Ways as well as other organizations in the community, the benefit their employees receive from involvement in the community and the role their leadership plays in promoting a culture of philanthropy and community spirit.

The Campaign Excellence Award was given to MMG Insurance.  They have been a longtime leader in supporting the United Way of Aroostook and despite a pandemic continued to do everything possible to support the vibrancy and health of the community continuously and generously.

Fran Gill was named the Volunteer of the Year for the work she did and the countless hours she donated to the United Way of Aroostook.

“She took on a lot of work to make sure the Aroostook CA$H Coalition was able to still run in a reimagined way when people could not meet face-to-face,” Ennis said. “She could be called on anytime to come help with anything needed and is very deserving of this recognition.”

“She has shown a high level of motivation and energy to spread the Live United spirit throughout Aroostook County,” Ennis said. “She has rallied people all the County and has helped raise hundreds of thousands of dollars.”

“When we set the year’s campaign goal, we anticipated that giving would decrease due to so many experiencing the negative effects of COVID in the community.  The community did not disappoint, and companies and organizations continued to pour out their generosity through workplace campaigns, telethons and events that had to be reimagined,” said Ennis.

Gina Leblanc-Eggert was thanked for being this year’s campaign chairwoman.

The United Way will also fully fund Dolly Parton’s Imagination Library, which is sending out more than 2,200 books a month to Aroostook County children from birth to age 5, and will also give Community Building Grants, support Aid for Kids, and give a significant donation to keep 211 Maine available for 24/7 support to Aroostook County residents.

For more information on the funding process, partners, campaign and the organization, visit unitedwayaroostook.org.

Members of the Houlton Band of Maliseets will head to the ballot box in order to determine who will be elected as their new tribal chief.
Pets END_OF_DOCUMENT_TOKEN_TO_BE_REPLACED