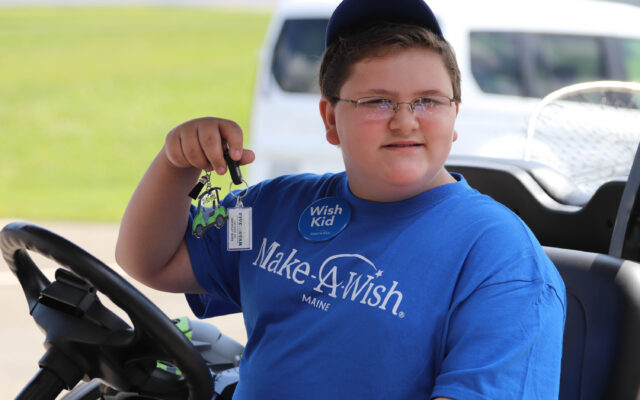 After a year of waiting, Smyrna Mills boy finally gets his Make-a-Wish

Alexander MacDougall • July 25, 2021
When 10-year-old John-David Therrien of Smyrna Mills got in the car on Friday with his parents, Paul and Joann, he thought he was going on a regular shopping trip to Walmart.

OAKFIELD, Maine — When 10-year-old John-David Therrien of Smyrna Mills got in the car on Friday with his parents, Paul and Joann, he thought he was going on a regular shopping trip to Walmart.

Instead, his parents drove him to the Bethel Pentecostal Church in Oakfield where a surprise party from the Make-a-Wish Foundation was waiting for him.

Therrien possesses a rare disorder known as craniosynostosis, in which the bones that formed in his skull merge and joined together improperly during infancy, which can affect brain growth if not treated. He also has been diagnosed with Shprintzen-Goldberg Syndrome, which further affects the craniofacial and skeletal tissue in his body, as well as polycystic kidney disease. He has had to undergo multiple surgical procedures in the past years for treatment of these conditions.

“It’s been a tough road,” said Paul Therrien, John-David’s father. “It’s been a long journey, and it’s still not over.”

Therrien’s parents had been in contact with Make-a-Wish since 2018 to help give Therrien something to look forward to. Originally, Therrien had wanted to travel to Disneyworld. But then COVID-19 struck, and travel for the Therriens was no longer an option.

But John-David was able to come up with another request: He wanted an off-road vehicle he could drive on to travel the backroads of northern Maine to go fishing.

“This way, he can go to fishing holes and be able to go outside,” said Marilyn Carey, one of the organizers present for Make-a-Wish Maine. “He doesn’t get a chance to go many places, other than the doctors.”

At the Bethel Church, John-David Therrien was gifted with his very own customized golf cart, supplied by Five Star Golf Carts in Windham. In addition, district game warden Charles Brown of the Maine Department of Inland Fisheries and Wildlife presented John-David with a lifetime fishing license.

In addition to his new golf cart, Make-a-Wish supplied the party with some of his favorite foods, such as chocolate cupcakes with strawberry frosting, gifted from the Pastry Corner, and chocolate ice cream from Houlton Farms Dairy.

John-David Therrien is scheduled to undergo another surgical procedure in August. But until then, he will have his new golf cart to go and do what he pleases with.

“He’s in pain right now, but he’s not letting anyone know that he is,” said Paul Therrien. “He’s a fighter.”

Members of the Houlton Band of Maliseets will head to the ballot box in order to determine who will be elected as their new tribal chief.
Pets END_OF_DOCUMENT_TOKEN_TO_BE_REPLACED