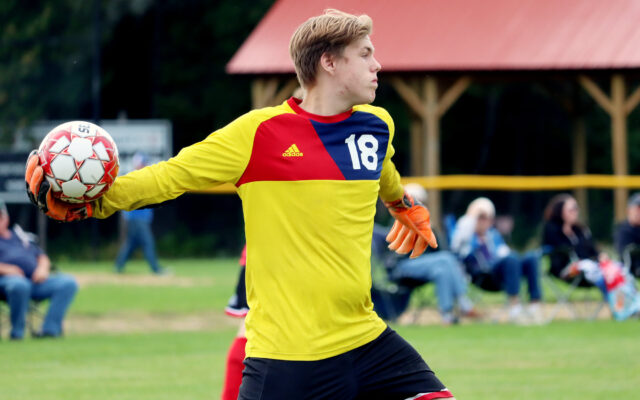 Joseph Cyr • September 3, 2021
The Katahdin boys varsity soccer team has a bundle of returning players this fall, which could bode well for the team’s goal of having an elite season.

STACYVILLE, Maine — The Katahdin boys varsity soccer team has a bundle of returning players this fall, which could bode well for the team’s goal of having an elite season.

Dylan Harris, who is entering his sixth year of coaching varsity boys soccer and is also the school’s athletic director and physical education/health teacher, said this year’s Cougar squad could be one of his deepest and most talented in several years.

“I think that we have some good experience on the team and will be able to get some big wins over the course of the season to possibly have the best soccer season the Katahdin boys have had in many years,” Harris said. “One of our strengths this year is the group of kids that have been playing together for three, four years now.”

Three of the six juniors on the roster — Kyle McNally, Grady Ritchie and Jeffery Martin — are actually entering their fourth varsity season. The trio joined the club as eighth-graders and have been named captains this year.

“The rest of the juniors have developed and progressed skill-wise and do very well communicating and reading each other on the field,” he added.

Justin Hurlbert is the lone senior on the club and was also named a captain. A defender, Hurlbert had a goal and an assist a year ago.

The remaining juniors are Wyatt Smith (midfielder with 2 goals and 4 assists), Jacob Perry (a forward with 6 goals and 1 assist) and Kalan Mann (a goalie with 92 saves and 2 shutouts).

Improving the team’s defensive capabilities will be one of the key focuses this season as the Cougars graduated three seniors who were anchors on the defense a year ago.

“We are looking to learn the basics of defense and the strategies that come along with playing defense at the high school level,” Harris said. “I believe our young players that will be patrolling the defensive end of the field have a great deal of talent that will only grow with each game experience they are a part of. I also hope to add some more players to our roster before the end of the season to give guys a breather.”

Members of the Houlton Band of Maliseets will head to the ballot box in order to determine who will be elected as their new tribal chief.
Pets END_OF_DOCUMENT_TOKEN_TO_BE_REPLACED