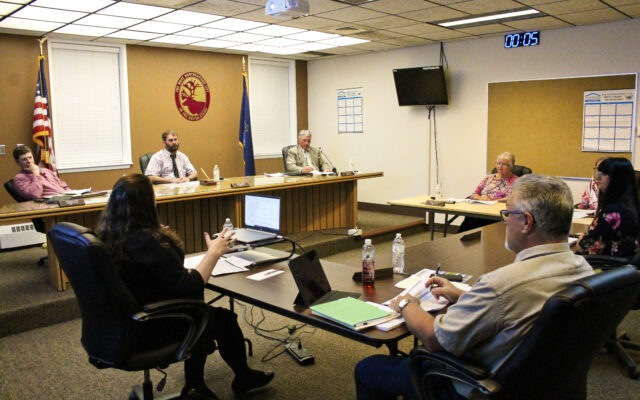 Hannah Catlin • September 23, 2021
Caribou residents will now be allowed to weigh in on a $9.9 million design for a new police station at the November elections, but the process of approving the referendum has torn the city council in half.

CARIBOU, Maine — Caribou residents will now be allowed to weigh in on a $9.9 million design for a new police station at the November elections, but the process of approving the referendum has torn the city council in half.

Returning from an absence at the August meeting where the council first debated the police station design, Mayor Jody Smith broke the 3-3 tie that originally prevented the question from appearing on ballots.

Though the council missed the Sept. 1 deadline for an official referendum, the city will now administer a non-binding exit poll at the voting site in November.

The city’s charter requires another, official referendum before any money is spent on the project. But the matter has nevertheless exacerbated a divide between councilors’ opposing philosophies on municipal spending and turned the discussion of replacing the city’s century-old police station bitter.

The majority is hoping to survey the public on the design for the new station before pursuing grant writers and alternative lines of funding for the project. The three-person minority feels that by putting an expensive proposal before the public at all, the city will end up committing to spend all that money and as a result, raise taxes.

“It’s either been the Taj Mahal or nothing,” Councilor Mark Goughan said. “It’s like everyone gets a turn of taking a bite out of the apple in government, I get it. But my gosh, it’s like they want the whole apple.”

Current projections from Maine Municipal Bond Bank show that without any grants or other aid, building the $9.9 million police station as designed would add approximately a mill and a half to Caribou’s budget for the next 20 years, Councilor Joan Theriault said. In 2020, the council was able to lower the mill rate by one mill, and then hold the line there in 2021.

Councilors in the majority said they wanted to abate some of that cost with other funds, but that they felt it would be irresponsible to invest in grant writers if the public didn’t approve of the project to begin with.

But the councilors opposed to the referendum felt that putting a $9.9 million price tag before the public, just to lower it later, was more irresponsible.

“If we go out half cocked looking like a bunch of school kids … without the proper numbers, this is just pie in the sky trickery at best,” minority Councilor Doug Morrell said.

The debate was soured further by the fact that councilors in the minority thought they had defeated the referendum for good in August, and were unaware the matter would come up at Monday night’s meeting. The agenda included a non-specific slot for the Police Station Committee — which includes Theriault and majority Councilor Courtney Boma.

Even though the poll in November will not satisfy the city’s charter requirement for referendums on projects exceeding $500,000, Councilor Mark Goughan said he felt the rules had been changed to allow the public to vote on the design.

“We have a representative form of government. People elected me to make some decisions,” Goughan said. “Who doesn’t want a new police station? But we’re down to the money part … This is going to sound harsh, but I am getting feedback from the people of Caribou. Yes I don’t represent everybody, but the people who voted for me want me to make the decision.”

Deputy Mayor Thomas Ayer, who voted with the minority on Monday, said that he would have been in favor of polling the public generically on whether they support building a new police station, but felt that it was dangerous to put the price tag before voters until the council had agreed on how to pay for it.

“When you don’t do your homework and bring a $9.5 million project to the council without first researching how we will pay for it, what impact will it have on the taxpayers, and not getting multiple opinions from different architectural firms, I will never support it,” he said.

Forbidden foods for our four-legged friends are many and can be very dangerous if ingested. Sometimes, we give our pets leftovers or what we consider treats. According to many sources, some human foods can make an animal very sick, and in certain cases can even be lethal.
What's Happening This Week END_OF_DOCUMENT_TOKEN_TO_BE_REPLACED