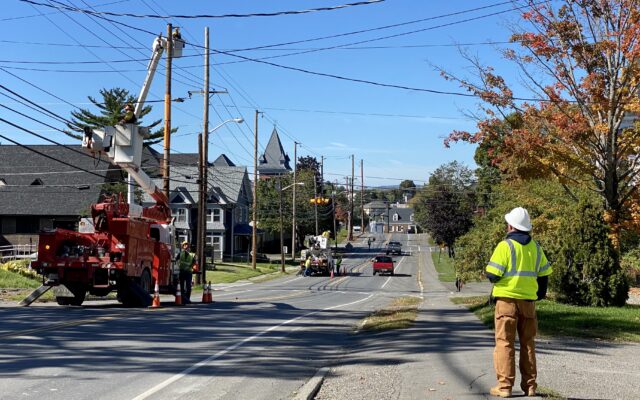 Alexander MacDougall • October 6, 2021
Houlton Water Company has taken another step toward an expansion of power lines in the town, which will eventually enable it to mitigate potential power outages once it is fully operational.

HOULTON, Maine — Houlton Water Company has taken another step toward an expansion of power lines in the town, which will eventually enable it to mitigate potential power outages once it is fully operational.

The finishing touches to new 34.5 kilovolt power lines are being placed along new telephone lines across Military Street, beginning near the entrance of Foxcroft Road and ending at Bangor Street. The update is a continuation of the project begun two years ago that connects power lines to NB Power Company in the neighboring Canadian province of New Brunswick.

The poles themselves had been replaced last year, replacing the previous ones which were over 50 years old. Sixty poles were replaced in total for the project, standing several feet higher than the originals.

Houlton Water Company General Manager Greg Sherman said that once the new poles are connected, it could help relieve the town of long power outages, such as those sustained last winter which sometimes lasted in excess of three hours.

“If this line had been in play, the town would have been back on in 15 to 20 minutes,” Sherman said.

The project has been delayed over the past year due to COVID-19 outbreaks, and additional maintenance is still required for the lines to be completed. Sherman said it may take until next summer to physically connect the lines to the power system. A planned outage will occur at that time as the system is integrated with Houlton Water Company’s existing framework.

“Work was delayed by about a year due to COVID,” Sherman said. “But we’re working on it as quickly as we can. We want to keep the lights on for the town and for people to have greater access to power.”

The old poles will remain in place for at least another year, Sherman said, to allow other utility companies (phone, internet and cable television) enough time to transfer their wires to the new poles.

A large metal pole is also being erected at the corner of Military and Sugarloaf Street to tie in Houlton Water Company’s 34.5kv unit behind the former Kitchen’s Garage location.

“This will provide a loop to our system and increase reliability of the system,” Sherman said.

Members of the Houlton Band of Maliseets will head to the ballot box in order to determine who will be elected as their new tribal chief.
Pets END_OF_DOCUMENT_TOKEN_TO_BE_REPLACED