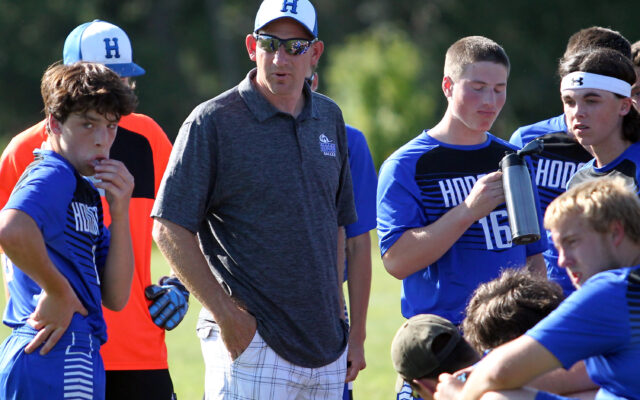 Joseph Cyr • October 27, 2021
A second-half surge carried the No. 2 Lee Academy boys soccer team to a 6-0 shutout over No. 7 Hodgdon Monday afternoon.

LEE, Maine — A second-half surge carried the No. 2 Lee Academy boys soccer team to a 6-0 shutout over No. 7 Hodgdon Monday afternoon.

Lee Academy (16-0 overall) will now face the winner of No. 3 Van Buren after the Crusaders beat No. 6 Easton, 3-2 Tuesday in the other quarterfinal bracket game.

In Monday’s game with Hodgdon, the two squads battled to a scoreless stalemate at the halftime break. In the second half, however, the Pandas offense kicked into gear led by a pair of goals by Joel Gerlach and individual goals by Ethen Allard, Luis Sots, Pedro Anselmo and Arda Parilti.

“We had a good game plan trying to keep their top scorers outside of the 18 zone as we knew they were very quick, had good accuracy with their shots, and had the ability to score in bunches,” Hodgdon coach Jason Little said. “Our defense and midfielders did an incredible job marking up their top players, but with three injured players (for the Hawks), we ran out of gas at the end. Offensively, our front line took advantage of the chances we had, but we had trouble getting around their fullbacks to put pressure on their goalie.”

“Although it’s disappointing to have the season end this way, I couldn’t be prouder of this team with how they held their heads high and left it all on the field,” coach Little said. “We will certainly miss our nine Seniors and can’t thank them enough for all their leadership over the last several years.”

For the first time since 2019, there is competition for open seats on the Houlton Town Council
Pets END_OF_DOCUMENT_TOKEN_TO_BE_REPLACED