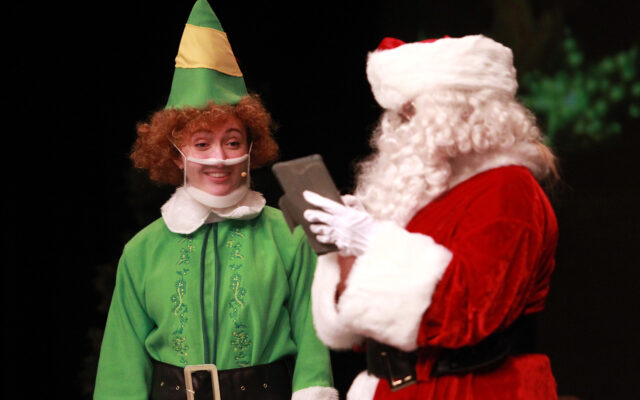 Joseph Cyr • November 16, 2021
Young actors will finally have the opportunity to showcase their skills when “Elf the Musical” opens at Houlton Middle-High School this Friday through Sunday.

HOULTON, Maine — Young actors will finally have the opportunity to showcase their skills when “Elf the Musical” opens at Houlton Middle-High School this Friday through Sunday.

After missing out on the opportunity to hold a school play last year, the chance to return to the stage is something the group is not taking lightly, according to director Kevin Mania.

“The kids are so excited to be able to get on stage again,” Mania said. “Last year we were not able to do any concerts or productions, so the kids are giving it their all, and there is a great buzz around the community about coming back into the auditorium again.”

“Elf the Musical” is based on the motion picture “Elf.” The musical ran on Broadway in the Christmas seasons of 2010-11 and 2012-13 and also toured annually in the United States during the Christmas holiday season.

The story centers around Buddy Hobbs, a young orphan child, who mistakenly crawls into Santa Claus’ gift bag and is transported to the North Pole. Santa and his elves decide to raise the child as an elf.

Years later, Buddy finds out that he’s actually a human and, at Santa’s prompting, heads off to New York City in search of his father, Walter Hobbs.

There are a number of differences between the movie and stage version of the story, including the addition of several more musical elements.

Houlton senior Ellie Grant plays the title character of Buddy and said she was excited to be back on the stage.

“It feels so great to be back up on stage after being gone for so long,” Grant said. “It is such a fun time of year for everyone involved, and we couldn’t be happier to be doing what we love again.”

All of the actors are required to wear face shields or masks during the performance.

“It is definitely difficult wearing masks while performing because it is even more important to enunciate our words for our audience to hear us,” Grant said. “COVID, on the other hand, has been a much more difficult challenge for us. Many kids have had to quarantine throughout the musical season. We definitely miss them when they are out. Regardless of all the setbacks, I am so excited to put this show on. We have all worked incredibly hard to put this on, and it has been so fun. We hope everyone loves it as much as we do.”

Tickets are $10 for adults and $8 for students, children and seniors. Advance tickets are suggested as the number of seats available is limited to allow for social distancing. Face coverings are also mandatory to attend the show. For information, call 207-538-3129 or email elf@rsu 29.org.

For the first time since 2019, there is competition for open seats on the Houlton Town Council
Pets END_OF_DOCUMENT_TOKEN_TO_BE_REPLACED

All of us at the Central Aroostook Humane Society hope that you had a wonderful and safe Thanksgiving holiday.  One change in shelter hours: just for the month of December, we will be closed Thursdays for training purposes.
What's Happening This Week END_OF_DOCUMENT_TOKEN_TO_BE_REPLACED