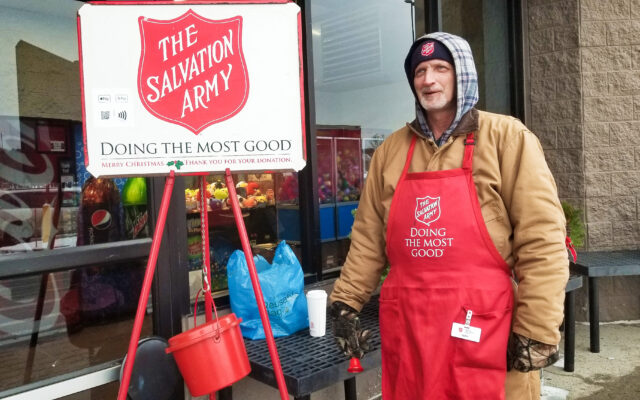 Joseph Cyr • December 2, 2021
They are a sight and sound synonymous with the holiday season. A bright red kettle with a cheery person ringing a bell can often be found outside of a local department or grocery store seeking donations.

HOULTON, Maine — They are a sight and sound synonymous with the holiday season. A bright red kettle with a cheery person ringing a bell can often be found outside of a local department or grocery store seeking donations.

Now through Christmas Eve, bell ringers for The Salvation Army will be out in force throughout Aroostook County collecting donations through the annual Red Kettle campaign. Donation buckets began popping up a week before Thanksgiving and will continue through the days leading up to Christmas.

But in these uncertain times, there simply are not enough volunteers available to fill every shift, meaning kettles often sit empty.

“We could use a lot more volunteers,” said Frank Natluk, envoy/pastor for the Houlton Salvation Army. “Whether it is because of illnesses or some in quarantine, our volunteer numbers are way down this year.”

Nataluk added the Red Kettle campaign is the primary fundraiser for The Salvation Army. Last year, the County branch brought in about $51,000 during the drive. Nataluk is hopeful the County branch will be able to duplicate that amount this year.

“We lowered our goal from last year, not because we do not need the money, but because we are cutting back on the number of paid bell ringers,” Natluk said. “We want as much of the donations as possible to go to helping people.”

For generations, The Salvation Army Corps has helped those in need during the holiday season with food and fuel assistance. Monies raised go toward The Salvation Army’s emergency assistance program, which includes heat aid for oil, propane, pellets and electricity. It also helps with their food pantry and soup kitchen meals.

“To be in a position to help people in need is our mission,” Nataluk said.

Tony Stewart of Houlton is one of those individuals who has faithfully served as a bell ringer the past two years.

“I really just like meeting the people,” Stewart said. “We start talking and it’s like we have known each other for a long time.”

On Thursday, Dec. 16, The Salvation Army branches across the state are conducting a “Kettle Blitz” with the branch that collects the highest percentage based on its goal receiving a bonus of $3,000 from the federal Salvation Army.

Funding from the red kettles does not typically go toward the purchase of toys at Christmas. Instead, those items are often collected through The Salvation Army’s “Angel Trees,” which are located inside the Walmart and Mardens stores, as well as Machias Savings Bank.

The Angel trees feature a tag specifying a type of gift desired for a specific youngster, teenager or their parents.

“A lot of those tags, though, are already gone,” Nataluk said. “People started real early this year. But if people still want to help a family out, all they have to do is give us a call.”

The Salvation Army will also be hosting a children’s play at 11 a.m. on Sunday, Dec. 19, featuring a modern twist on the story of the birth of Jesus.

For the first time since 2019, there is competition for open seats on the Houlton Town Council
Pets END_OF_DOCUMENT_TOKEN_TO_BE_REPLACED

We hope everyone enjoyed a wonderful holiday season and is looking forward to the new year.  December was a busy month at the Central Aroostook Humane Society with so many people and businesses bringing in much-needed supplies and monetary donations, which help us to take care of the special temporary pets in our care.
What's Happening This Week END_OF_DOCUMENT_TOKEN_TO_BE_REPLACED