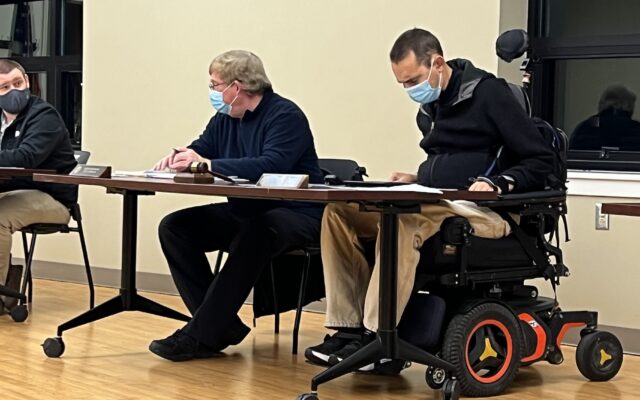 David DiMinno • December 2, 2021
All seven city councilors convened in the Sargent Family Community Center to close out 2021 with their final meeting of the year.

PRESQUE ISLE, Maine — All seven city councilors convened in the Sargent Family Community Center to close out 2021 with their final meeting of the year.

The council began the meeting by addressing changes made to the city’s comprehensive plan, including the additions of a new dog park, an indoor pool and a BMX bike park.

The council opted to strike the indoor pool from the plan, as city pools in the past have cost more to run than what they made. They also chose to change the wording on the BMX park, as it was too specific, and they want the park to serve multiple purposes.

The council then held a hearing for Matt Elliot, the owner of a building at 38 Elizabeth St. that the city has designated as dangerous. The building’s foundation has collapsed, and the building has been considered dangerous for the last five years. No one lives in the building.

He had full intentions of making the necessary improvements to fix the property, but health complications, and troubles with hiring contractors, have made the process difficult, Elliot said.

“This pandemic has screwed everybody up, but I want to make this right,” Elliot said when addressing the council.

The council agreed to give Elliot 30 days to put in the necessary support for the foundation to make it less dangerous.

Presque Isle Police Chief Laurie Kelly announced that Officer Tyler Seeley has been promoted to detective. The chief said that Seeley will do well in this new role. Seeley will also take over as the department’s civil rights officer.

The council then approved its consent agenda, and received an update from Presque Isle Assessor Lewis Cousins.

The demolition on the second floor of city hall has been completed as scheduled, and the council approved renovations for the third floor as well. The council urged residents to see the work that has been done on the first floor of the building.

The council also approved the schedule for the upcoming Jan. 5, 2022, regular meeting, which is expected to take longer than most council meetings due to appointing new officials. The first meeting of the year allows the city council to swear in new councilors, as well as appoint board members to all city boards.

There will also be open board positions that need to be filled. The council said that if any residents are interested in holding board positions, they should contact the city manager’s office for information.

The meeting then turned to a discussion of the city’s marijuana ordinance. However, the council wanted to have a format where residents could come and voice their opinions and concerns about marijuana businesses in the community. Councilors will host a public forum on Wednesday, Feb. 2, in the Sargent Family Community Center, and hope to have an open dialogue on the matter.

The councilors thanked Randy Smith for his 12 years of service to the city council, and said they will miss his wisdom in the coming years.

The money for these bonuses will come out of the city’s surplus funds, and will not cost taxpayers extra money.

“We have a very dedicated roster of employees,” City Councilor Jeff Willette said. “It’s great seeing our employees push through. We are lucky to have them.”

The council then entered executive session to discuss real estate and credit enhancement agreements, and then adjourned shortly after.

The next city council meeting will be held at 5:15 p.m. on Jan. 5, in the Sargent Family Community Center.

Forbidden foods for our four-legged friends are many and can be very dangerous if ingested. Sometimes, we give our pets leftovers or what we consider treats. According to many sources, some human foods can make an animal very sick, and in certain cases can even be lethal.
What's Happening This Week END_OF_DOCUMENT_TOKEN_TO_BE_REPLACED