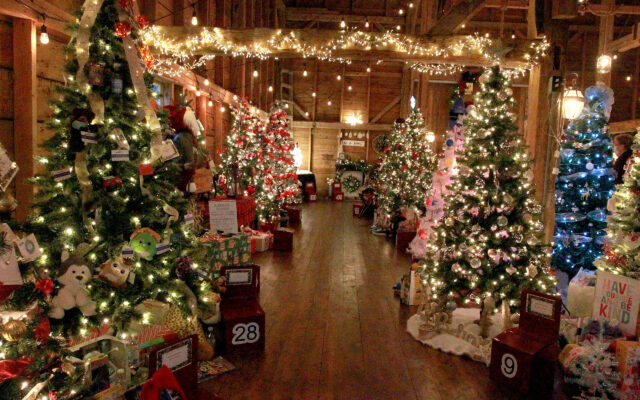 Joseph Cyr • December 10, 2021
A new location, which was a considerable distance from Houlton Regional Hospital, did little to deter people from attending the Health Services Foundation’s Festival of Trees this year.

HOULTON, Maine — A new location, which was a considerable distance from Houlton Regional Hospital, did little to deter people from attending the Health Services Foundation’s Festival of Trees this year.

And those who did show up opened their wallets and checkbooks like never before as the event raised a record-breaking $44,000 for the organization.

Lori Weston, executive director of the foundation, said she didn’t know what to expect for this year’s fundraiser. Last year, the festival did not take place due to concerns about COVID-19. In 2019, the festival raised $34,000 for the charitable organization.

The event was not held in 2020 due to COVID-19 and this year’s event had to be moved from the cozy confines of the hospital’s meeting room to a barn located on the Foxcroft Road.

“We went into this year just hoping, at some level, to get close to the amount we generated in 2019 of $34,000,” Weston said. “Seeing as how it was a very different year for us, the end result was absolutely overwhelming.”

Located at the Sunset Farm barn  at 436 Foxcroft Road, the change in venue came about when organizers realized that the hospital was simply not the place for bringing in large groups of people, since COVID-19 numbers remain very high.

Weston said the new location was not without obstacles to overcome, such as the need for portable toilets and heaters to warm the large barn. The parking area also presented a challenge when the area received a large amount of rain, turning the field into a muddy mess.

Visitors did not seem to mind the change in venue either as people from as far away as Bangor and Portland stopped in to view the trees, Weston said. The older population tended to arrive earlier in the day, while families arrived after school or after dinner hours.

“When our doors opened each day at 9 a.m., there was never a time that we were empty,” she said. “We also noticed a lot of people that we have not seen at our festival before. We didn’t take into consideration that a hospital setting can be uncomfortable for some people.”

She added that the rustic barn setting, complete with a sleigh and fire pit behind it, provided the perfect backdrop for the event.

“The barn itself was a draw,” she said. “Some of the older couples, the men were not even looking at the trees, they were in awe of the barn.”

For the first time since 2019, there is competition for open seats on the Houlton Town Council
Pets END_OF_DOCUMENT_TOKEN_TO_BE_REPLACED

We hope everyone enjoyed a wonderful holiday season and is looking forward to the new year.  December was a busy month at the Central Aroostook Humane Society with so many people and businesses bringing in much-needed supplies and monetary donations, which help us to take care of the special temporary pets in our care.
What's Happening This Week END_OF_DOCUMENT_TOKEN_TO_BE_REPLACED