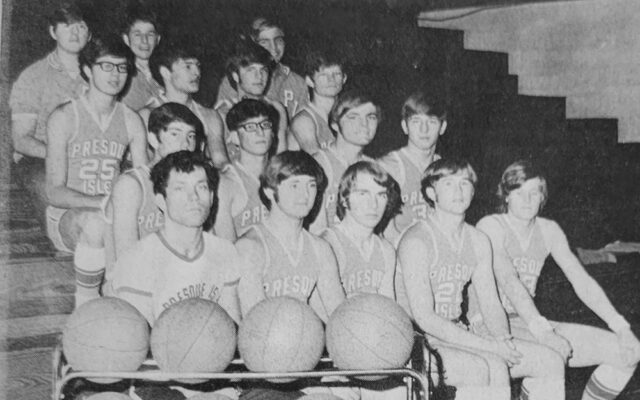 He had been affiliated with the company since 1943, coming to this from Caribou, where he served as engineer for the Caribou Water, Light and Power Company for three years. Prior to that, he worked for the State Highway Commission. He graduated from the University of Maine with an electrical engineering degree.

Chest Campaign met original $17,100 quota — The completed Community Chest drive was successful in meeting the quota of $17,100 established by the direction in October, it was disclosed Sunday at a meeting of the Chest directors. The session was held at the offices of Postmaster Orin Bishop, president of the Chest. President Bishop lauded the efforts of Harold K. Graves, drive chairman, who sent out a second appeal in order to place the drive in the “win column.” It was also announced at the session that since the Chamber of Commerce directors had discontinued the Veterans Service Center, so the amount of $1,900 called for in the budget for the Center did not have to be met. The following sums went to the following agencies: Women’s Field Army, $900; N.E. Home For Little Wanderers, $700; Boys Community Camp, $1,025; USO, $1,000; Opportunity Farm, $250; Boy Scouts, $2,500; Community Association, $9,150; Hospital Aid, $1,500; and 4-H, $75.

Bowlers on same team tie — Two members of the MPG Busy Bees received awards during the seventh week of the women’s recreation bowling leagues. Thelma Parks and Bunny Esterbrooks tied, each rolling 113 games, and were presented the Northern Lanes’ seventh week awards. They were in the American League, Division 1.

Chairman re-elected to NYME Board — In its 99th annual elections, the members of the New York Mercantile Exchange re-elected, on Dec. 15, Llewellyn Watts Jr. as chairman of the Board of Governors. Added to the Board of Governors were Charles M. Cohen and Sidney Edelstein. Re-elected along with Watts were vice chairman, Jacob Stern, and Harry A. Aspenwall, as well as board members, David Mierfeld and Melvin Miller.

Maine man appointed to new program — The National Endowment for the Arts in Washington announced the appointment of a Maine man as one of three arts management interns in the United States. Alden Chandler Wilson of Ocean Park had been assigned to the Maine State Commission on the Arts and Humanities, Cultural Building, Augusta, as an arts intern for a period of one year. He had been assigned to work directly for Richard D. Collins, executive director of the Maine arts agency, where he will receive training in all aspects of the Commission’s programs, management and policy. Wilson graduated from Edward Little High School, Auburn; majored in Art History at Colby College, was a senior scholar graduating cum laude in 1969 and was also part of the Bates College summer study program in Western Europe, 1967.

Gordon received coaching honor — Alan Gordon, coach of the University of Maine at Presque Isle men’s soccer team, was selected as Maine Collegiate Men’s Coach of the Year by the coaches group. Gordon had already received a similar honor from the Maine Athletic Conference the previous month. The Owls finished the 1996 campaign with a 12-3-1 mark, advancing to the NAIA Northeast Region Tournament before losing to Geneva College in Beaver Falls, Pennsylvania.

Beavers down Hawks — The Washburn Beavers were off to their best start in several years, moving to 4-0 with an important 71-58 victory over Hodgdon. The victory capped off a 3-0 week for Larry Worcester’s team, which included a 69-59 win over Southern Aroostook and a 58-33 thrashing of Wisdom. In the win over the Hawks, Trent Cunningham scored 24 points and had 15 rebounds and seven assists to lead Washburn’s attack. The Beavers used a 22-8 scoring run in the second quarter to take a nine-point lead into halftime. They converted 18 free throws in the final eight minutes of play to secure the victory. Jon Constant ahd 12 points, while Mike Kelley and Nick Thompson each added 10 for the winners. Darren Stewart scored 16 points and Aaron Henderson added 14 for Hodgdon.

For the first time since 2019, there is competition for open seats on the Houlton Town Council
Pets END_OF_DOCUMENT_TOKEN_TO_BE_REPLACED

We hope everyone enjoyed a wonderful holiday season and is looking forward to the new year.  December was a busy month at the Central Aroostook Humane Society with so many people and businesses bringing in much-needed supplies and monetary donations, which help us to take care of the special temporary pets in our care.
What's Happening This Week END_OF_DOCUMENT_TOKEN_TO_BE_REPLACED